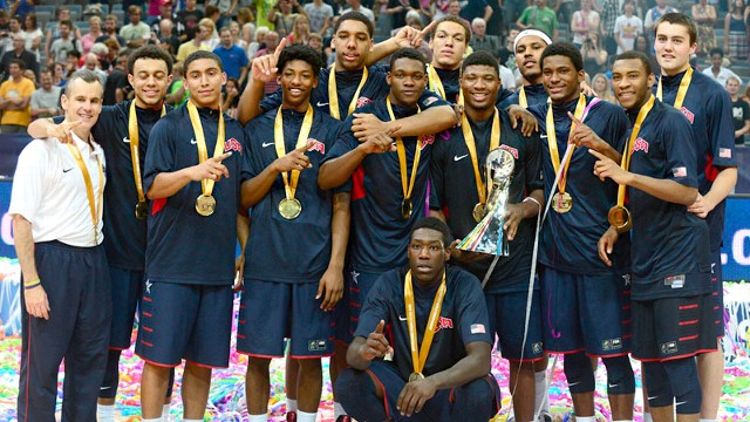 Last summer, I chased Australian wonder Dante Exum around a college gym in Long Beach for about an hour, looking to get an interview. It was like an episode of Scooby-Doo, except there was no unmasking, and I never actually caught up to him. At one point, as if to taunt me, he and a few of his teammates found their way up to the top-deck bleachers, right next to my friends, directly above press row and out of my line of vision. I had all of my questions lined up: Is getting an American college scholarship a priority for you? Did your dad (Cecil Exum) share any juicy tales of his days at North Carolina when he was Michael Jordan’s teammate? While you were in L.A., did you manage to go to In-N-Out and get an animal-style double-double? Did you like it? I didn’t get to ask any of them. It’s a shame. I really wanted to get his thoughts on In-N-Out.

Dante then was a 17-year-old point guard playing at the Adidas Nations Global Championship. He was just a month removed from playing in the final game of the FIBA Under-17 World Championship in Lithuania, where he was a force, averaging 17.3 points, 3.5 rebounds, and 3.5 assists. He was skinny, but extremely long, resembling a 6-foot-4 Nicolas Batum. At Adidas Nations, Team Australia was getting demolished by a more talented American squad in the third-place game, but he still brought his fellow Aussies over for impromptu huddles to work harder on defense, even when their defeat was a foregone conclusion. He led by example, and on one possession, he pressured the backcourt and with his combination of length, anticipation, and pure speed was almost nonchalant in grabbing a steal. He was something special then, but tempering my enthusiasm was probably the way to go. Plenty of prodigies veer off course.

This weekend, he competed in medal rounds of the U19 World Championship in Prague and saw his averages from U17 increase against stiffer competition. He’s grown an inch or two since the last time I saw him in person, and his frame has filled out, but not overtly so. He’s become an even more accomplished ball handler and penetrator, though he still needs work on his jumper (and dear lord, work on your free throws, man!). In the U17, he was known to professional scouts, but was just making his first rounds in the public eye. This time around, he was the main attraction and didn’t disappointed in his development. Before the tournament even ended, Fran Fraschilla tweeted that Exum could be a top-five pick in the 2014 draft. DraftExpress took it a step further — he’s ranked third overall in its 2014 mock draft, where he is two spots below Andrew Wiggins and three above Jabari Parker. This is the same draft projected to be as important as the 2003 draft, which brought the league into a new golden era. In an interview with DraftExpress, Exum expressed his intent to play for an American college, which would push his eligibility to 2015. Powerhouses like Indiana and Louisville have been on his trail for a while, but others are starting to take notice.

It’s getting harder to temper that enthusiasm now.

If you tuned in to the medal round of the U19s, odds are you weren’t watching it to see basketball at its apex. These international youth tournaments feature some of the best teenage players in the world, but most are still bound by the natural laws of teendom. They’re still gangly, still bumbling, still delightfully awkward. Being that most of the players are college-bound or at an age when they may already be playing professional basketball, the gracelessness is mitigated a bit, but under bright lights and the pressures of representing your country against foreign athletes and styles of play, that awkwardness bubbles right up to the top. As a rule of thumb, the two least awkward teams typically advance to the championship round. This year, it came down to the U.S. and Serbia, which shouldn’t come as a surprise. In the four U19 tournaments since 2007, at least one of these two countries has been a part of the championship game. Team USA won, but the results are inconsequential. That’s not why we’re paying attention.

There’s only one thing that could compel an ordinary person to intently follow these games on a holiday weekend: the rare chance to witness the genesis of something great hiding behind the sea of uncoordinated, unspectacular bodies. There’s an unmistakable, gratifying feeling that comes from being there for the moment a player shows his first glimpses of stardom, even though it’s evident that most of these standouts won’t make it all the way. Those who watch these tournaments and showcases are watching for the future, but there’s also an immediate joy in seeing what these prodigious athletes are capable of now, even if it’s a thrill reserved only for the most perverse and voyeuristic of draft nerds.

There’s a clear hipster element in play. Being early to the discovery process of a potential prospect is just like stumbling upon the demos of the next great band. But knowing the latest and greatest music has infinitely more social capital than knowing the next potentially great basketball player (I’ve made more friends from sharing new music than I have from waxing poetic about Justise Winslow), so keeping track of young athletes prehype might actually be the purer hipster form.

The tournament revisited a few known entities from the 2013 draft process. Two of the biggest draws were Team USA’s Marcus Smart, the Oklahoma State bulldozer of a guard who decided to return to school despite hearing legitimate top-three rumblings, and Croatian Dario Saric, the Nike Hoop Summit darling who likely would’ve been a late-lottery pick had he stayed in the draft. Saric was by far the best player on his team and showed it, despite not leading Croatia past the quarterfinals. Smart, on the other hand, looked ordinary among the rest of the team, which could precipitate a tumble down the 2014 draft boards, barring a flawless sophomore season in Stillwater.

This year was mostly about the movers and shakers of 2014 and beyond, though. One obvious talent was 6-foot-4 Serbian point guard Vasilije Micic, who orchestrated his team’s offense better than any player in the tournament, evidenced by his 26 assists over three medal-round games. Then there’s tournament MVP Aaron Gordon, who is the target of many lazy Blake Griffin comparisons, though, admittedly, they do convey just how freakish an athlete he is. Lost in Wiggins Watch is the fact that having Gordon at Arizona will single-handedly make the Pac-12 watchable.

As for the 2015 draft’s forecast, the two youngest members of Team USA, Winslow and Jahlil Okafor, both 17, were two of the most valuable. And both will be eligible for the 2016 tournament. Winslow, who was born in ’96, was the team’s utility man and lob artist, playing with a style and intensity reminiscent of Michael Kidd-Gilchrist. Okafor, who is indeed related to Emeka, already has an NBA body at 6-foot-11 and posted a PER of 40.2 throughout the tournament. Seriously.

But for the most part, those who watched came to bask in the glory of Dante Exum. His 33 points against Spain in the quarterfinal round sealed his fate: He is one of the elite prospects in the world. Part of me feels privileged to have caught him so early in his development, but part of me still wishes I’d caught him sooner.