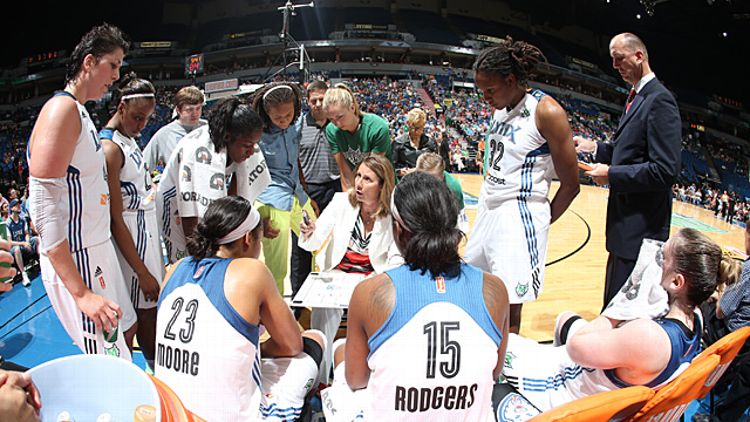 I’m going to start by telling a story that makes me sound like an asshole. A few weeks ago, right at the apex of the NBA playoffs after San Antonio had gone up 3-2 on Miami, I was having lunch at an Indian buffet in Minneapolis to celebrate a holiday that my brother made up (long story, but Laborial Day — halfway between Memorial Day and Labor Day). My brother’s fiancée has a close friend who is very much into the WNBA in general and the Minnesota Lynx in particular, so I asked her how the Lynx were doing. Another person at the table interjected and asked if I followed the WNBA, to which I found myself horrifically replying, “No, I’m almost overwhelmed just with regular basketball.”

Those might not have been my exact words, but that was essentially what I was saying and I couldn’t even stop myself as I felt the words escaping from my mouth and my foot going in. And this is coming from someone who has long wanted for the WNBA to succeed; who was fascinated to discover — in researching for an article about the history of basketball video games — that early versions of Electronic Arts’s NCAA March Madness series included some women’s teams; who believes that the WNBA is important culturally, and perhaps even played a part — by its proximity to the NBA and its acceptance of openly gay players — in paving the way for Jason Collins to come out.

But there I was with a plate of dal makhani and tandoori chicken, being an asshole because some things about sports and the way we think about them are so entrenched in our psyche that we can’t even see them until they’re dragged kicking and screaming in front of our stupid faces. Consider how in Foot Locker there are “shoes” and “women’s shoes.” How the NBA is not the MNBA.

So when I got an invitation from Jule Benick of the Lynx Army — the sister organization of the fan-made and team-supported Timberwolves Army — to attend a Minnesota Lynx game as they took on the Atlanta Dream, I figured it was time to woman up and give the WNBA a real shot.

With the upper deck of the Target Center closed, the energy was compressed down into the lower bowl and, as Julie pointed out, the vibe was distinctly different from a Wolves game. It felt a little more earnest, more family- and community-oriented, with lots of kids and parents out on a Tuesday night and everything dialed back to about 85 percent.

I asked Julie if there were any teams that people hated in the WNBA the way die-hard fans can hate the Lakers or the Heat for their success and bandwagon fans.

Not really, she said. The Phoenix Mercury came closest, she explained, saying that some people hate Diana Taurasi the way some NBA fans hate Kobe, and now they have Brittney Griner, who at 6-foot-8 towers over most female basketball players. (The Lynx’s starting center, the fiery and physical Janel McCarville, is just 6-2.)

If dynasties and superteams are something you can’t stand about the NBA, check out the parity in the WNBA: In a 12-team league, the last 10 titles have been won by six teams, and never back-to-back. The 34-game season also keeps players healthy and legs energized — none of that last-two-weeks-of-the-season slog like in the NBA. There’s also (at least in Minnesota) an enduring tinge of territorial pride. The biggest cheers during Lynx introductions were for McCarville and Lindsay Whalen, products of the University of Minnesota who returned home triumphantly, a reminder of the days when players like Bob Cousy starred at Holy Cross before going on to play for the Celtics.

Though I’d watched the WNBA on TV before, this was the first time I’d turned my attention to it since I genuinely started following and learning basketball. The game itself was a blowout (after the opening minutes, 23-22 was as close as the Dream got to grabbing the lead, and that was with a minute left in the first quarter), but there was plenty of fun to be had: Maya Moore pump-faking defenders into the air before snaking her way along the baseline to the hoop, or Whalen dropping reverse layups and dishing off pretty dimes to Monica Wright (who scored a season-high 22). The end result was the Lynx decimating the league’s top defense, 94-72.

The style was reminiscent of the ’60s NBA, before defenses and offenses became so intricate and reliant on precision over pure effort. When defenders blew assignments, they usually paid. When one team gave up a long rebound, the result was almost always a fast-break bucket. It’s the kind of basketball that a lot of people want to return to the NBA, although there were a lot of long midrange shots that are disdained by modern analytics.

I was having a good enough time, but not nearly as good a time as a woman in my section. At some point, I became aware that she had been standing for the entire game, more or less. She had aggressively but naturally curly hair, was in her 40s or maybe early 50s, and next to her was another woman I can only presume was her mother, who mostly sat. They both wore Whalen jerseys over white T-shirts.

Even as the Lynx’s lead bloomed to 24 with a minute left in the fourth, she stood. She slapped her hands on her head when they turned it over, pumped her fists when they scored, and chastised any Dream player who made it to the free throw line with a drawn-out “OHHHHHHHHHH YOU GUUUUUUUNNA MISS IT.”

As “YMCA” played during a timeout in the fourth, she made the letter symbols over her head, making the “C” backward. When she realized her mom was still sitting, she helped her to her feet, then held her around the waist, supporting her until the chorus came around again. Then they both made the letters with their arms in the air, one “C” going the right way and the other its mirror image.

At the very end of the game, something quietly amazing happened. Before several Lynx players invited some kids onto the court to dance along with “Jump on It!” by the Sugarhill Gang to celebrate the win, before Moore and Wright lined themselves up in opposite corners of the floor and went charging toward each other to collide in an epic and traditional high five, the Lynx and Dream players lined up near their benches and then passed each other, hands extended for rote and maybe only half-felt high fives, the kind of thing your coach made you do in Little League, when repeating “good game” so endlessly and lackadaisically it turned into “guhgainguhgainguhgain.”

I can’t say why, exactly, but the enactment of that ritual in all its half-assedness stuck out. Sports is sports, I guess. Play sets are more or less complicated, games are more or less athletic and more or less glitzy, but the game stays the game, with all its attendant fandom and love and hate and highlights and mistakes. It was, in short, just regular basketball.