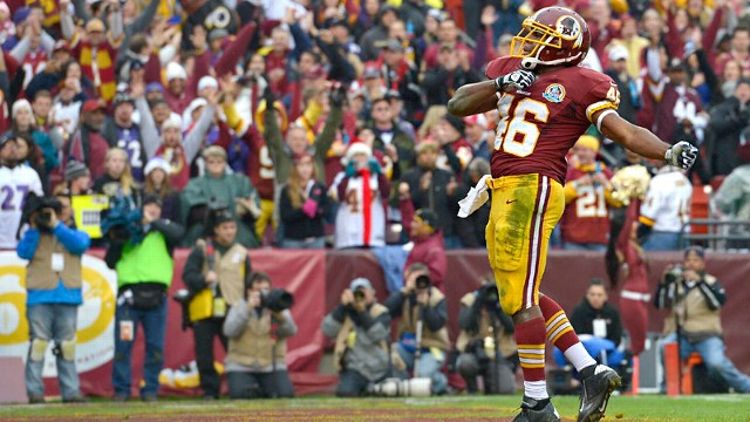 It might make sense for the first Redskin in this countdown to be another second-year member of the Washington offense, but I’m sorry to say that’s not going to happen. In fact, his name will not appear in this space at any point. Considering my own sports fandom this year, and a considerable fantasy football keeper investment, that is not an evil I plan to bring upon myself. You’ll have to look for you Bob Half-Lion Half-Eagle the Tertiary takes elsewhere.

Even if there were no superstition involved, any excitement for Alfred Morris’s sophomore season is warranted. His quarterback was the Offensive Rookie of the Year, but in just about any other season, Morris’s first-year totals would’ve been more than enough to take the award home. His 1,613 rushing yards are the third most for any rookie ever. Like, 93 years ever.

Two other players in the top 10 — Mike Anderson and Clinton Portis, whose single-season Redskins rushing record Morris broke last season — were also parts of Mike Shanahan offenses, which is not a coincidence. Shanahan has long been able to plug players into a larger zone scheme and see them succeed, but it requires a certain type of runner — a type of runner like Morris. Morris ran the 40-yard dash in 4.67 seconds at last year’s combine — a significant factor in his lasting until the seventh round in the 2012 draft — but he does the exact sort of one-cut, vision-based running that breeds success on Shanahan-led teams. The Pistol formation and a running quarterback contribute to a more modern look for these Redskins when compared to the Elway-era Broncos, but strip that away, and the principles for the running back are nearly identical.

Take the play at 2:00 above. As the line steps in unison to the left, Morris takes a toss from his Pistol-aligned quarterback, but the movement up front, his line of sight, and where he receives the ball aren’t all that different from a good ol’ stretch play. Morris finds a crease, puts his foot in the ground, and goes. Here, being decisive is more important than being fast, and Morris showed all season that he ticks the boxes for a running back in this type of offense.

It’s true that there’s no way to separate Morris’s overall success from his quarterback’s influence — the threat of said quarterback as a runner creates numbers advantages, creases, and opportunities that wouldn’t exist in an offense like, say, the Texans’ — but as you can see throughout that video above, there are plenty of turn-around-and-hand-it-off plays that end with Morris ripping off 12-yard gains. No team in the league used play action more often or more effectively last season than the Redskins, and Morris deserves at least part of that credit.

Outside of the numbers, there’s just something about Morris that endears him to football fans. Everything about him seems to harken back to a football time gone by — his build, his running style, his adherence to a single touchdown dance. Even his number feels relevant. There’s something about seeing a tailback wear 46. In an offense lauded for being new, the Redskins leaned on something decidedly not. Also, he drives this.

Morris said last week that he felt like a “lost puppy” as a rookie. It’s a similar message to the one many players typically make going into their second season. There’s a comfort the second time around that makes even greater success seem inevitable. We know that isn’t necessarily the case, but the changes from Year 1 to Year 2 may include even more complications for Morris. Concerns about his quarterback’s health after his devastating knee injury may lead to fewer quarterback runs and a more traditional challenge for Morris. Based on what we’ve seen so far, there’s reason to believe it’s one he can handle.