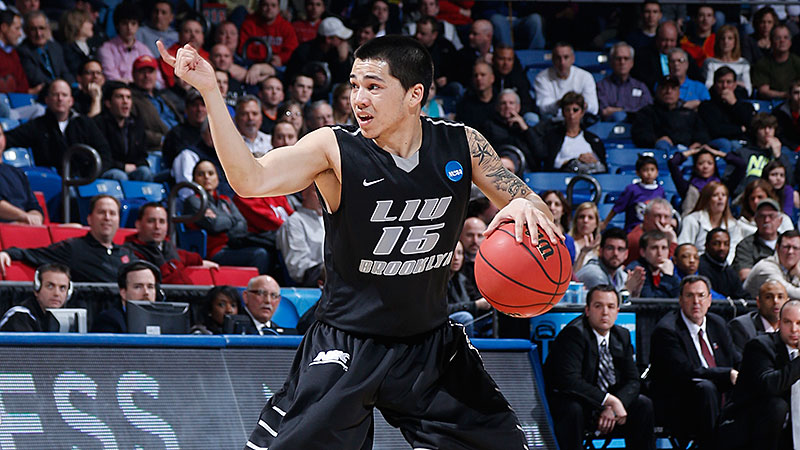 On Saturday night, LIU-Brooklyn point guard Jason Brickman became only the fourth player in Division I history to reach 1,000 career assists, a milestone he hit about 10 minutes into the first half. While the Blackbirds — no strangers to the Triangle — have qualified for the NCAA tournament the last three years, this season has been a disaster, owing to the absence of former NEC Conference MVP Julian Boyd and a slew of injuries. Boyd, who had earned a second medical redshirt and was gunning to return this season after two ACL tears, tore the same ACL again in January, ending his six-year college career. With Boyd’s injury and the absence of the able scorers of years past, like Jamal Olasewere and C.J. Garner, Brickman’s final push to 1,000 was that much more difficult.

Brickman, whom I’ve watched for the past three years, is one of the strangest players I’ve ever seen, both in demeanor and style of play. He has terrific court vision, but never uses that ability to score; he’s the type of guard who zips around the half court, ball at his hip, looking for a passing lane and an open man. Options one, two, three, and four are pass, and few of those passes are anything but fundamental.

When he shoots, which his coaches beg him to do more often, you get a sense of reluctance, that all his other ideas are exhausted. Off the court, it would seem that any write-up about Brickman needs to contain the phrase “no emotion.” (His best friend on the team, Boyd, recalled Brickman’s recruiting visit recently in the New York Times: “He literally said about seven words — and that’s being nice to him,” Boyd said. “That was the hardest recruiting visit I had to take care of.” They took Brickman to Times Square, which he loved.)

When LIU coach Jack Perri took Brickman out to a standing ovation at Sunday’s Senior Day, his parents in the crowd and his brother Justin (who makes Jason, listed with Gates Foundation levels of charity at 6 feet tall, look like Magic Johnson) on the Bryant bench, he just climbed down, sipped some Gatorade, and examined his feet. It was like he was checking out in the first half of a preseason game or something. Brickman, in his own way, is an unforgettable dude.

As I’ve been going to games, the two constants have been Brickman and my friend Willing Davidson, an editor at The New Yorker, there early, saving us seats. I don’t think anyone is going to challenge this — and honestly I would love someone to try — so here goes: Willing is by far the biggest Blackbirds fan of all time. I asked him to send over some thoughts about the Brickman experience and tirelessly watching a low-tier D-I team struggle after a few extremely fun years of winning conference championships and heading to the Dance:

Willing Davidson: Being a great point guard is hard to do without passable teammates. This season, there were few GIFable moments for Brickman — no half-court alley-oops, no Globetrottering. Fans invented the Brickman assist — like the Kobe assist, but different: This stat measures when a perfect pass slips through the fingers of a teammate, or when the teammate, fed under the basket, double-clutches and gets blocked, maybe even by the underside of the rim. The Blackbirds were terrible this year, a team with not much talent and not much of a system. But Brickman averaged 10 assists! He put up a double-double against Indiana, in LIU’s only game against quality competition. He led the NCAA in assists by more than two per game, a greater margin than any since they started counting. He finishes his college career with more assists than anyone outside the state of North Carolina, strangely. All this by repeatedly and patiently backing up and resetting the offense after the other team collapses on him, leaving him no driving room and few passing lanes. This year was defined by the entry pass that came right back out. It was amazing — point guard by attrition.

Goble: Totally. At yesterday’s game, I noticed that Bryant was shading Brickman and I definitely thought, This is one of the only times I’ve ever seen a defense throw extra bodies at a guy who is absolutely not going to shoot it. Can Brickman’s brain be transplanted into J.R. Smith’s body? I feel like the neurosurgeons of NYC could pull this off.

Willing, you’ve been going to the games longer than I have. How would you describe the vibe of the Steinberg Wellness Center, formerly known as the WRAC? The characters who go to every game, you sort of memorize them and they relax me in this weird way. When the seniors on the dance team hugged after their last timeout performance at an LIU home game, not gonna lie, I was legit a little sad.

Davidson: A game at the Steinberg Wellness Center is a strangely ersatz experience. It’s Brooklyn, and the Blackbirds draw a decent crowd, but it includes a fair number of parents new to the neighborhood, with small children. There’s a Blackbirds cheer, but only the pep band sings it. The audience only gets loud when the team is in the conference championship, and Spike Lee shows up. Come spring break, the place is empty. A fan in a frenzy is basically on his own. There’s no assist counter on the gym wall,  no Brickman’s Battalion or Brickman-themed taunt. Seeing him do his work there had a dream reality to it: Wait, these are actual NCAA records he’s breaking? Like the ones the real basketball players make and break? An assist by Brickman is the same as one by Gary Payton or Steve Blake, two players he’s passed on the career list this season?

Goble: Looking at that list, Brickman definitely does seem out of place, but maybe that’s actually more impressive? As you alluded to earlier, Brickman is passing to scrubs, and it’s impossible to know what his total game could be like if he had better teammates. Ed Cota was passing to Antawn Jamison and Vince Carter. Bobby Hurley was passing to Christian Laettner and Grant Hill. Chris Corchiani was passing to Tom Gugliotta. Surely Brickman’s level of competition is lower, but is the degree of difficulty higher? There’s a lot to celebrate here.

Davidson: All sports fandom is projection, of course, but this experience has been extreme. I could have spent this winter willing my Christmas cactus to bloom, but instead I spent it willing a near-anonymous 21-year-old to push the ball up the court against a trap. Somehow it seems more arbitrary when the player doesn’t have too many other fans. Root for Jabari Parker and you join an industry; root for Jason Brickman and you get weird looks. But I love the little dude, and wish him all the best. This might be where I heed the words of Julian Boyd, Brickman’s favorite running mate, when Brickman shouted him out on Instagram: “Yea yea. Don’t get mushy on the gram.”

Goble: Yeah, I’m extremely curious to see how the Brickman saga plays out. He clearly has this extremely rare ability and I can’t imagine it won’t translate somewhere.