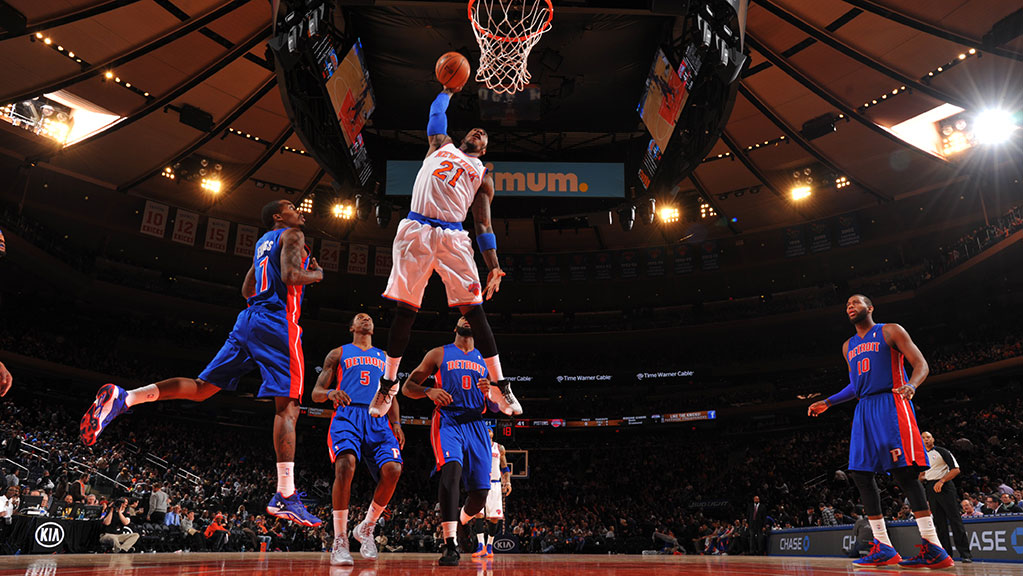 The New York Knicks and the Detroit Pistons were once two very storied franchises, but in recent years, they’ve both lost their bearings. Under James Dolan, the Knicks have seen several underwhelming seasons, and the Pistons are very much removed from the Bad Boys era. Tonight, the 21-39 Knicks (who are on a six-game losing streak) visit the 23-36 Pistons (who are on a four-game losing streak). To get you ready for the 7:30 game, we’ve compiled some information for you:

• netw3rk on the New York Knicks — it’s the hope that kills you in the end.
• Zach Lowe on why the Detroit Pistons should not be this bad
• A Q&A with Joe Dumars from August 2013 on the suddenly exciting Pistons

• The Knicks are on a six-game losing streak, giving up 114.8 points per game and allowing a 49.1 percent opponent field goal percentage.
• The Knicks have averaged just 39.7 percent shooting in their last three games.
• The Pistons are on a four-game losing streak and have lost seven of their last eight.
• The Pistons have allowed 103.7 points per game across the season, putting up even worse defensive numbers recently, allowing their last seven opponents to shoot 112.3 points per game at a 49.6 percent mark.
• Knicks injury report: Iman Shumpert, Kenyon Martin — out; Amar’e Stoudemire, Carmelo Anthony — day to day
• Pistons injury report: Josh Harrellson, Brandon Jennings — day to day

Here are a few interesting Internet things we found over the weekend that we wanted to share:

• Michael Kruse from the Tampa Bay Times spends some time with Julian Newman, the most marketed 12-year-old basketball player in the world.

• John F. Burns at the New York Times writes about Richard Noble, the 67-year-old England-educated Scot who aims to break the world land-speed record. Noble looks to reach 1,000 mph by the end of 2016 with a dart-shaped vehicle called the Bloodhound, which cost $70 million.

• Earlier today, tennis coach Nick Bollettieri was named as an inductee to the International Tennis Hall of Fame. In anticipation of the news, Christopher Clarey over at the New York Times profiles the legendary coach.

• We’re exactly 100 days away from the 2014 FIFA World Cup, so here’s a hype video from Adidas, starring Lionel Messi, to get you excited:

There’s only one ranked college basketball team playing tonight, but lucky for you, it’s no. 14 North Carolina. Though the game against Notre Dame should be a cakewalk, this will be a great chance to catch the Tar Heels in action. North Carolina is coming off of 11 straight victories after a tough January showing with four losses, and sophomore Marcus Paige has really stepped up his game, garnering ACC Player of the Week honors last week with 15.3 points and 5.0 assists in three conference wins. The two play at 7 p.m. on ESPN in the Dean Dome.

There are eight NBA games scheduled for tonight, including the “fate worse than death” game we highlighted up top. There aren’t any spectacular matchups, but at least you can watch John Wall against Zach Randolph and Marc Gasol, LeBron vs. the Bobcats, and the down-in-the-slumps Jazz against the even-more-down-in-the-slumps Bucks. Here’s the full listing.

The NHL games should prove more interesting tonight, with the Blue Jackets suiting up against the Maple Leafs at 7 p.m. and the Canadiens playing the Kings at 10:30. The Flames, Wild, Sabres, and Stars also play.

MLB 29-Day Warning: Billy Hamilton Is the Hero We Need