MLB 29-Day Warning: Billy Hamilton Is the Hero We Need 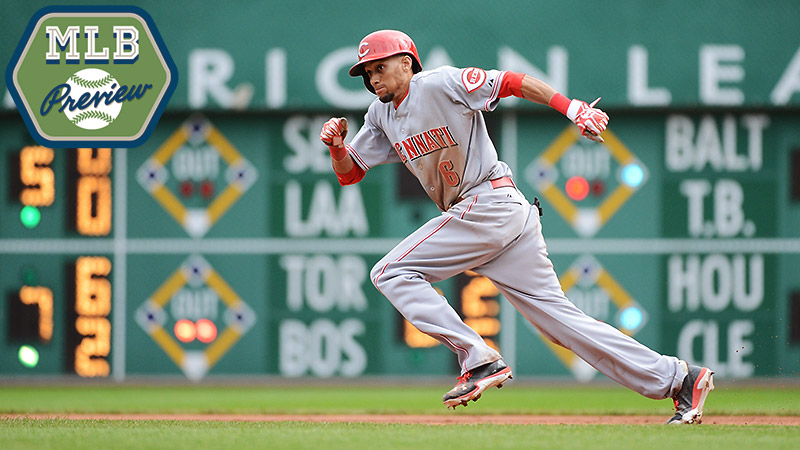 In most of the ways that matter — level of play, ease of access to games and information, the existence of Brandon McCarthy’s Twitter account — being a baseball fan is better than ever. When someone says otherwise, it’s usually his or her sense of nostalgia speaking. However, there is at least one way in which baseball has become a less compelling product: its present lack of speed. If you grew up watching baseball in the go-go 1980s, the decade that wrapped up right before go-go Reds rookie center fielder and potential savior Billy Hamilton was born, you have a right to be fed up with today’s pace of play.

It’s not just that games have gotten longer, though they have, by an average of 26 minutes since 1980. (If there’s one thing baseball writers love, it’s lamenting how long it takes to watch baseball. Six decades ago, they were complaining about games “dragging” past the two-hour mark.) It’s the way they’ve gotten longer: There are more pitches, and more time between pitches, more time between batters, and more time between innings. According to a Wall Street Journal report from last season, the action in an average game could be condensed into 18 minutes. The rest is between time, the filler that makes you want to check your phone or change the channel.

But the MLB Warning series isn’t supposed to give you reasons not to watch baseball, so here’s the secret to surviving (and savoring) the sport at its slowest pace: Focus on the fastest player. And the search for the game’s fastest player — of either today or of all time — begins and ends with Hamilton.

Hamilton, the Reds’ second-round selection in the 2009 amateur draft, became an object of national interest early on, even among fans who don’t follow prospects closely. In 2011, his first full pro season, he stole 103 bases, becoming the first player to top 100 at any level since 2001. The next year, he broke Vince Coleman’s professional record, swiping 155 across Class A and Double-A. And last season, he stole 75 at Triple-A before a September summons to Cincinnati. There, he went 13-for-13 on steal attempts over his first 11 major league games before getting caught by a slide-step, a pitchout, and a perfect throw by future trivia answer Juan Centeno. Those 13 steals were more than Hamilton needed to blow by Jay Bruce to finish second on the Reds in stolen bases behind Shin-Soo Choo, whom Hamilton will replace in center field and in the leadoff slot this season. This is what we’ve been waiting for while scouring box scores, glimpsing grainy minor league video, and seeing Hamilton excel in a big league pinch-running role: his chance to sink or swim as a starter.

Sinking is still a real possibility. Hamilton has flaws, which makes him all the more fascinating; he’s the Flash to Mike Trout’s Superman, possessing super speed but not super strength. He doesn’t hit for power, he’s susceptible to the strikeout, and he won’t walk enough to survive by base-on-balls alone. Hamilton went 7-for-19 with a couple of doubles and a pair of walks for Cincinnati last September, but that first taste may have set expectations too high. In 123 games in the Triple-A International League prior to his call-up, he posted a .308 on-base percentage, 20 points below the league average, and in 17 Puerto Rican Winter League games last November, he hit only .227/.284/.293 (with 11 steals in 13 attempts). The Reds don’t have a traditional alternative at the top of the lineup, which should give Hamilton a longer leash if he struggles to hit. But because he lacks power and does so much damage when he gets on base, pitchers attack him over the plate, and he’s yet to prove he can make them pay. Forty-three of the 78 pitches (55.1 percent) the switch-hitter saw while with the Reds were in the strike zone; the average zone rate for non-pitchers is 49.5 percent, and over a full season, Hamilton’s 2013 mark would have ranked second behind Marco Scutaro’s among qualified batters.

But swimming is still a real possibility, too. According to one major league source, Hamilton’s best home-to-first time during his brief big league stint was a few tenths of a second faster than any other hitter’s from the left side last season. And as long as Hamilton gets a good jump and doesn’t stumble on his way to second, he almost literally can’t be caught: Even with a quick release from the pitcher and a strong, accurate throw from the catcher, the ball won’t beat Hamilton to the bag. That knowledge isn’t lost on Hamilton, who tried to steal second base in 14 of his 15 opportunities last season (the one time he didn’t, the batter put the first pitch in play) and to steal any base in 14 of his 35 overall opportunities, a 40 percent attempt rate. Only two players have ever had a higher attempt rate in a season with at least 30 opportunities: Rickey Henderson in 1982 (41.2 percent) and Eric Davis in 1986 (41.9). (Here are the leaders in career attempt rate.) Davis, now a Reds special assistant, is schooling Hamilton this spring; Bryan Price, the team’s new manager, has instructed the Reds to run aggressively. No one is telling Hamilton to tone it down.

If everything clicks, Hamilton could be a Coleman clone on offense, but better on defense and more valuable overall; as a potential plus center fielder, Hamilton has a higher upside than Coleman, who was an average left fielder at best. In Coleman’s 1985 rookie season — when he, like Hamilton today, was 23 years old — he hit .267/.320/.335 with a major league–leading 110 steals. That slash line might be too much for Hamilton to hope for, but he could approach the steals total. PECOTA, the Baseball Prospectus projection system originally designed by Nate Silver, foresees a .301 on-base percentage for Hamilton in 2014. But because his attempt rate is so high, his projected steal total is still astronomical. Plug 712 plate appearances — Choo’s total from 2013 — into PECOTA as Hamilton’s playing time, and the system spits out 108 steals. Only one player since the 19th century has posted an OBP that low and stolen more than 60 bases: Coleman, who in his second season finished with a .301 OBP and 107 steals. In the context of his era, Coleman’s crazy season almost made sense. A similar season in 2014 would be a beautiful anachronism, like Vin Scully’s one-man broadcast booth.

Hamilton’s willingness to exploit his incredible speed makes him the antidote to boring baseball, a player so exciting that anticipating his next plate appearance makes even the filler fun. When Hamilton is on deck or due up, we await his next flight to first. When he’s on base, we abandon our second screens — until he gives us something to tweet about. One camera feed feels inadequate: To capture the moment, a broadcast would have to be Brady Bunched into enough boxes to show Hamilton’s lead, the batter, the pitcher, the catcher, and the other infielders, all of whom would be on elevated alert.

Hamilton’s style is like something out of the past. His speed is like something from the future. And by combining the two, he’s become one of the best parts of the present. One way or another, the magic will wear off. If Hamilton becomes a star, he’ll lose that new base stealer smell. If he flops, we’ll forget him. For now, though, we’ll be watching, and wondering which it will be.

Goalie Corey Crawford, whose mask went missing before Chicago's outdoor game against Pittsburgh, is now without his pads.