The New York Knicks: It’s the Hope That Kills You in the End 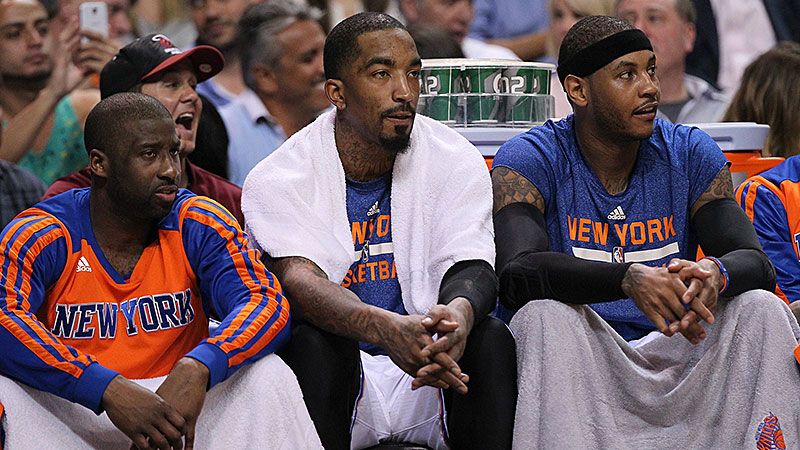 Hope is the most basic unit of the sports social contract.

The 2013-14 Knicks are the worst Knicks team I have ever experienced because of the totality with which the franchise, at every level of engagement, has destroyed even the illusion of hope. The players don’t fit, the team’s options for adding players are nil, the coach can’t find his best lineup unless nearly all his players are injured, and the franchise seems more concerned with bad press than bad play. The team’s incompetence is so complete that it is almost easier to believe this all some kind of evil plan. Surely no team can fuck up this much? The myriad ways the Knicks have found to blow games stretches the mere act of losing into tragi-farce performance art.

The Knicks do not just lose, they explore the concept of losing. They are four games out of a playoff spot in the worst Eastern Conference in history. They have no draft pick in the best draft in a decade. Their coach either purposefully designed the worst possible defensive scheme for his team’s personnel, or his team just doesn’t listen to him. Their best player is entering unrestricted agency, and the team’s best hope for re-signing him is that perhaps he cares more about money than winning. The starting point guard very well may go to jail.

The last two games have given national audiences something of a taste of the different flavors of Knicks hopelessness and its various side dishes.

The Warriors came to the Garden on Friday night, fresh off a 20-point choke-out at the hands of the Chicago Bulls. Golden State won three of the four quarters against the Knicks, led by as many as 27, and won the game by 23, without any of its players breaking a sweat. The emblematic moment of Knicks despair bubbled to the surface in the fourth quarter, as Tyson Chandler, once a perennial Defensive Player of the Year candidate, currently averaging zero fucks given, decided he’d had just about enough of this shit, thank you very much, and took out his frustrations on Marreese Speights, leading to an ejection. As teammates separated Speights and Chandler, Melo glided by the scrum without as much as an uninterested glance in its direction. You don’t have to be a body language expert to be able to read “Whatever.”

Then on Sunday afternoon (coming into this game, New York was 0-6 when playing before 3 p.m.), the Knicks faced off against the Bulls at the United Center. While Mike Woodson has in past weeks blamed injuries for the team’s struggles, Tom Thibodeau has taken a team saddled with various ailments afflicting key players, including former league MVP Derrick Rose, and wrung every last drop of effort out of it to the tune of a 33-26 record, all while engaged in something of a cold war with his own front office. Joakim Noah had a 13-point, 14-assist (welcome to the Knicks Career-High Club, JoNo!), 12-rebound triple double. It was the first time in 28 years a center has notched 14 assists, and the entire game took on the feeling of something like a reverse job interview for the services of one Carmelo Anthony. After the game, J.R. Smith, of all people, questioned the Knicks’ collective heart. J.R. SMITH!

Here’s what being a Knicks fan means in 2014: If you care about the team, you’ve more than likely wondered if Ray Felton going to jail could possibly help New York’s cap position. It’s that dark. Being a fan of the New York Knicks is to grapple with these formulations where actual harm to a person’s quality of life is about the only avenue left for maintaining even the illusion of hope that this ill-constructed, capped-out team could improve in anything like the near term. Maybe Amar’e will suffer a career-ending injury. Maybe Ray will end up doing a bid. Maybe Carmelo cares more about money than he does about ever having a chance at winning a title. Maybe James Dolan … never mind.

Bandwagon fans are reviled because their seeming opportunism calls into question their authenticity, or their capacity to maintain hope through the downtimes. This, in the mind of the “real fan,” translates to some kind of fundamental untrustworthiness inherent in a bandwagon fan’s character. It’s a ridiculous thing to believe, yes, but fandom is inherently ridiculous, if you let yourself think about it all. In fact, thinking about it is antithetical to sports fandom itself. If you take time to consider it, following the ups and downs of a group of men wearing color-coordinated clothing makes very little sense. Fans have no actual agency regarding wins or losses — it’s a trick of the light played on our bone-deep instinct for tribalism.

That’s why I’ve never felt any particular animosity toward — for lack of a better word — the “dumb fans.” The Kobe stans, the count-the-ringzz types, those poor souls who really think the Knicks are one player away. Teams sell hope. That some people buy in to the hope more than others is less interesting to me than the fact that we all, on some level, need to buy in to it in the first place. The 8-year-old fan might spend two hours drawing a favorite player on the back of a notebook. The 28-year-old fan might spend two hours researching game film and breaking down that favorite player’s on/off numbers. That one expression of fandom seems more intellectual than the other does not change that they are both basically the same thing.

The accrued weight of the franchise’s failures and lost gambles means the team’s fans have been forced to really think about what they’re doing, and thinking is the death of fandom. I’m not talking about arguments over stats and players and salary cap figures — that’s thinking within the framework of the social construct of sports fandom. I’m talking about thinking to yourself, “Why am I doing this?”

Quarterback guru George Whitfield Jr. has expressed interest in working with Marshall this summer, but Malzahn will not allow it.