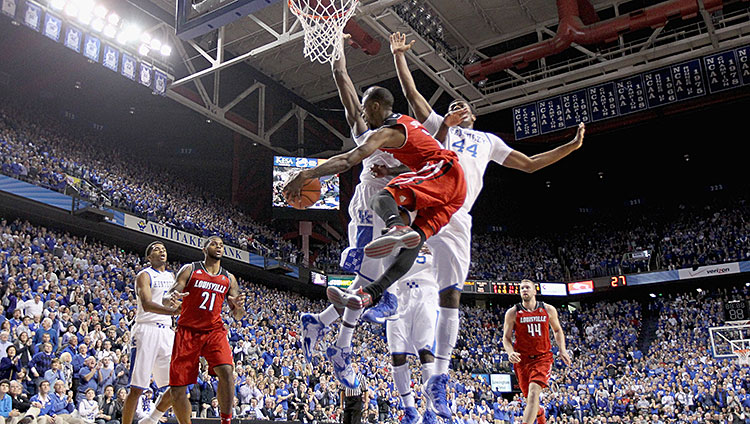 We here at Grantland know you all are very wonderful people with incredibly busy lives that don’t include spending hours researching the Louisville-Kentucky rivalry. But at some point, somebody will mention the in-state rivalry, and you’ll need to know more than the names John Calipari and Rick Pitino. So to boost your basketball knowledge and earn awe points from your friends ahead of tonight’s game, we’ve put together the Kentucky-Louisville College Basketball Primer: Everything You Need to Know to Sound Like You Know Everything.

No. 8 Kentucky plays no. 4 Louisville tonight in a Sweet 16 matchup at 9:45 p.m. ET at Lucas Oil Stadium in Indianapolis. The game will be broadcast on CBS and is available for streaming online.

Both schools from the Bluegrass State boast a strong basketball tradition, and this year’s game will be one of opposites. Kentucky boasts the blue and white while Louisville wears the red and black. One’s mascot is a cat and the other is a bird; we all know that Sylvester and Tweety never got along.

The Wildcats are led by fresh-faced Julius Randle, James Young, the Harrison twins, Willie Cauley-Stein, and Alex Poythress. The Cardinals are helmed by veterans — Russ Smith, Luke Hancock, Chris Jones, and Wayne Blackshear — along with the younger Montrezl Harrell. Kentucky specializes in a one-and-done approach that’s produced Anthony Davis, Terrence Jones, Marquis Teague, Eric Bledsoe, Boogie Cousins, John Wall, and a ton of others (107 Wildcats have played in the NBA). Louisville likes cultivating its team — it has seven upperclassmen on the club, many of them playing prime minutes.

The Wildcats are led by John Calipari, who joined the program in 2009, and the Cardinals are led by Rick Pitino, who joined in 2001. Oh, and Pitino was at Kentucky from 1989 to 1997, leading the Wildcats to six NCAA tournament appearances (including three Final Fours and one championship).

And here are some historical facts specific to tonight’s game:

Evidence That John Calipari and Rick Pitino Are “Friends”

Maybe these guys don't really dislike one another — pic.twitter.com/ltgGEblULQ