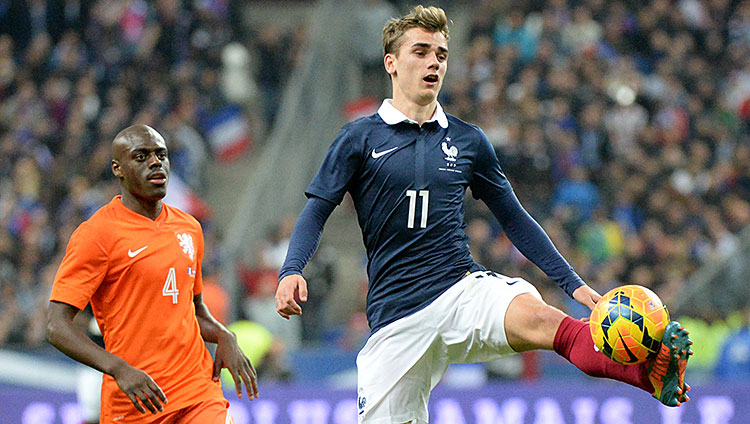 France makes national football teams like it makes wine: generally older, kind of snooty about it, sometimes great, but often overhyped. And sometimes, like at the 2010 World Cup, you get one that’s gone extremely bad. Except maybe not this year. This year, France could be the wildcard. Increasingly in the lead-up to this summer, the country is breaking in a group of young, exciting players, and perhaps shifting its identity. Nobody exemplifies that more than Antoine Griezmann.

On a club level, Griezmann is a breakout star. On a national team level, he’s a virtual unknown. Part of the reason for that is, as he was emerging at Real Sociedad, Griezmann was in the midst of a national-team ban, thanks to some ill-advised partying while on duty for the under-21s. The ban ended earlier this year, after France had already narrowly qualified for the World Cup, leaving the 23-year-old free to make his debut for the senior national team in a 2-0 friendly win against the Netherlands on March 5. All of which means that with a grand total 69 minutes of senior international game time under his belt, Griezmann is a virtual unknown, the wild card’s wild card.

Over the last two seasons, Griezmann has developed an elite skill: the ability to score while playing as a wide player. Call him a midfielder, or a winger or a wide forward, or whatever you want — the point remains the same. He starts out wide and moves into scoring position.

His scoring record this season is very impressive, with 15 non-penalty goals putting him sixth in the league (all stats courtesy ESPN Stats & Information), and tops among players not from La Liga’s big three of Atletico Madrid, Barcelona, and Real Madrid. He has a scoring rate of 0.6 goals per 90 minutes (all per-90s are for players with 1,000 minutes played minimum), which puts him 10th, which is even more impressive when you consider that he is essentially doing it from a midfield role.

Among players classified as midfielders in La Liga, nobody has scored more goals, nobody has scored at a faster rate, and nobody shoots more than his 3.9 shots per 90 minutes, or more on target than his 1.9 shots per 90. It’s worth noting that some of this is down to, or at least aided by, the system Real Sociedad play; fellow wide attacking player Carlos Vela is second in La Liga in goals from the midfield, and midfielder scoring rate.

The stats may be aided by the system, but it’s also clear that as Griezmann develops, his attacking output is increasing, year over year. 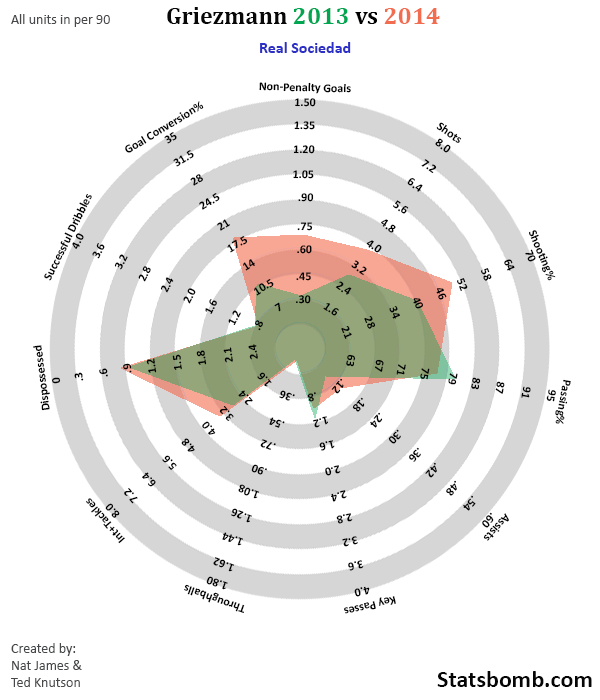 You may have noticed that little bit of magic involved his left foot. Most of his little bits of magic do. A breakdown of his goals from this season shows that nine were with his left and only one with his right, with the other five coming from headers. In fact, Griezmann has shot the ball only seven times total with his right foot. That’s a little bit unusual. Traditionally, wide players who score a lot tend to cut inside onto their strong foot — it’s an easy, instinctual way to create space to shoot. This move is Arjen Robben’s bread and butter. So while it might be tempting to compare Griezmann to other left-footed scorers, a player like Theo Walcott is probably more apt. Both players are roughly the same size (5-foot-7, give or take) and both are dynamic scorers.

Where Does He Fit In for France?

The biggest question for Griezmann is whether he can adapt positionally when it comes to the national team. Because, if there’s one place on the football field where France is in fact set, it’s on the left side of the midfield. That’s Franck Ribéry’s office, and he just happens to be one of the best half dozen players in the world.

It’s easy to envision a role for Griezmann as an impact sub if France needs a goal. For half an hour, frantically chasing a game, it’s not a big deal for either Ribéry or Griezmann to play out of position as part of an urgent, last-ditch comeback operation. That’s also an area where Griezmann seems like a natural fit, given his ability to get goals while also playing alongside an out-and-out striker (like Karim Benzema). But if Griezmann is going to contribute more than that, he will need to find a new position.

It’s certainly possible. As his game has developed this year, his positioning at Real Sociedad has evolved along with it. His touches are increasingly coming from areas beyond the left wing. While during the 2012-13 season Griezmann looked like a typical left-winger who likes to cut inside … 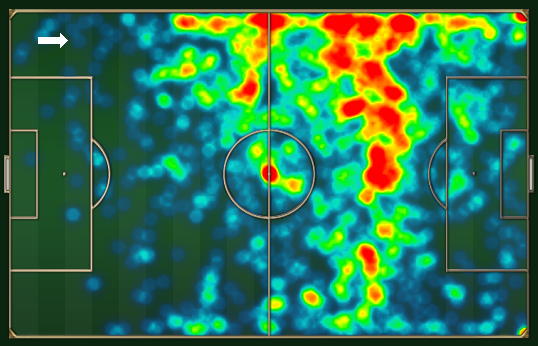 … this season, his touches are more varied, as he has become a more ever-present attacking threat. 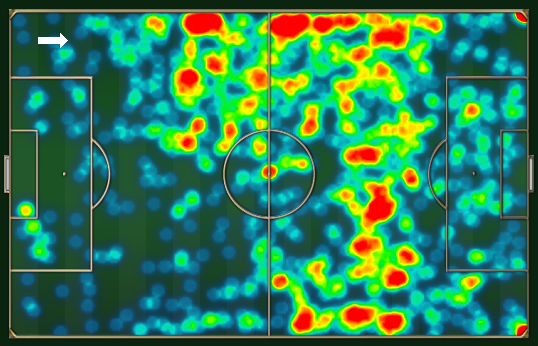 France’s coaching staff appear to see him as versatile enough to play elsewhere as well. When Didier Deschamps called him for the friendly against the Netherlands, Deschamps spoke glowingly of Griezmann:

“He is very clinical, scores a lot of goals and creates a lot of goals. He is equally comfortable on either side and through the middle. On top of that, he is tactically very aware — that’s why I called him up.”

Some of that is probably the empty praise heaped on any young player making his debut, but some of it sure seems like a manager looking for a way to make Griezmann something more important than simply Franck Ribéry’s backup. It makes sense, especially since France has struggled to get production from both the second striker position and the right wing. If Griezmann can play there, he immediately makes himself France’s best option.

Handing Griezmann a starting role in a relatively unfamiliar position is a risk for Deschamps and France. He’s young, has virtually no international experience, and, because of his ban, has had very little time to mesh with his French teammates. It’s the kind of risk that previous French national teams have been loath to take. But that risk aversion is a big part of why the 2010 version of this team ended up as vintage vinegar. Griezmann is the kind of electric talent who can inject vitality into a skilled French side. If he’s given the chance and he succeeds, there’s no reason France can’t be a very dangerous team. Or they could age him another four years, like they always do.