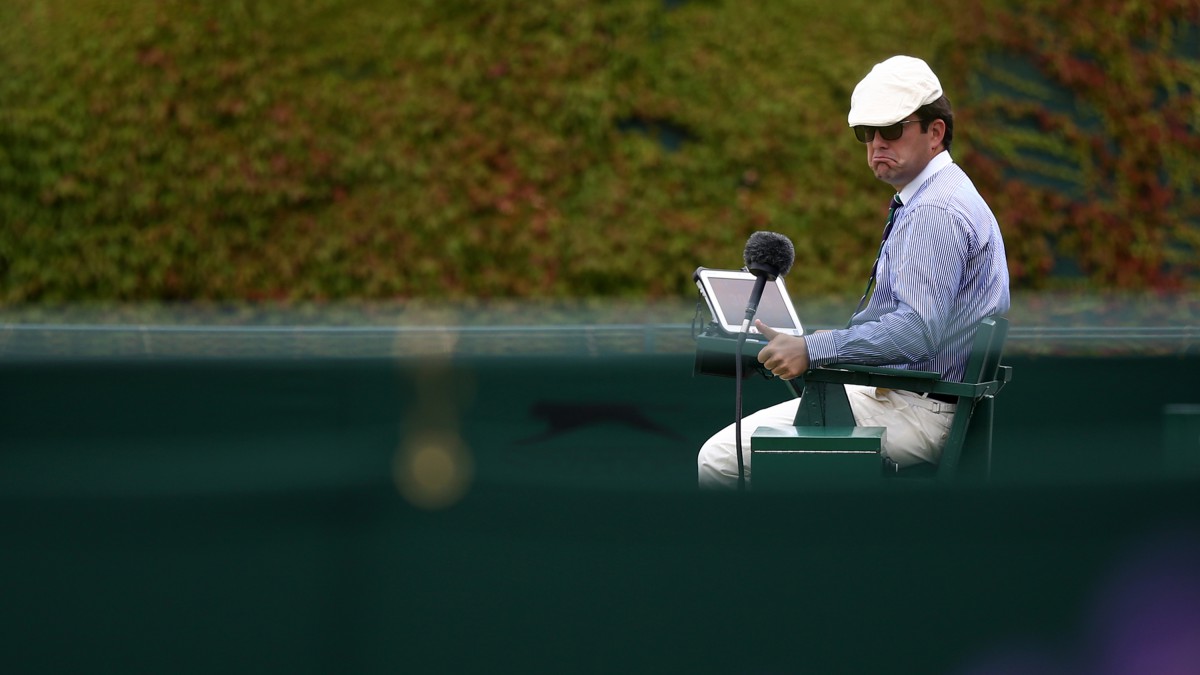 The Championships. It seems so simple, which is its promise and its charm. Wimbledon Hill Road climbs a hill to Wimbledon. To get to the church, take Church Road. The Common is the field open to all. The green grass is English grass, and the leaves on the trees wave like little flags. In town, a pub is never farther than a stone’s throw. It is midsummer. At the end of the day, the light lingers and turns gold.

The All England Club. Pass inside polished gates and lovely, curving walls. Inside, everything is in order; everything has its place. At the center of everything there is a court: Centre Court. Ladies in knee-length skirts and gentlemen wearing linen fill the walkways and yet do not form a crowd. The sound they make is like the light buzz from Pimm’s, more murmur than noise. The ball girls and boys1 move from place to place in a proud, sturdy line. Everywhere there are trim hydrangeas, cyclamen, verbena, shrubbery — the official white and purple and green — and ivy, so much ivy. It is a sanctum, something hushed and old. Over all this float the voices of umpires, smooth and regular, calling the score, and the steady, cheerful thwack of tennis balls. Security guards wear suits and chauffeur caps. The officials look officious in their striped shirts and little pageboy caps; it is like a giant game of make-believe.

Wimbledon is what it is — people say this sometimes. They say it in celebration of the tournament’s prestige, its pride, and its efficiency. They say it to shrug at Wimbledon’s presumptions. And they say it to defend its more indefensible traditions — the whites-only rule, which is suggestive of something more than a dress code; the members-only enclosures; Venus on an outer court.2 It’s a tautology that suggests authenticity — or that the club is a moralizing pain in the ass.

There is another Wimbledon, after all — a Wimbledon where a security guard slumps under the basement stairwell for a brief moment, letting his blazer rumple; where an usher locks herself in a bathroom stall, desperate to check her phone. A Wimbledon of proprietary data and camera banks, of a vast network of tunnels and dark halls, of endless rows of anonymous offices. A Wimbledon of debenture holders, where money and birthrights are engines of exclusion. A Wimbledon that held even its best chance of restored glory at a distance, because Andy Murray had been too poor, too demonstrative, too much a Scot.

But as I wandered around in a daze last week, finding myself lost in the grounds’ mazy ways, I was gripped by their magic. I saw the banks of the hydrangeas, saw men and women taking their tea, saw the crowd on Murray Mound and the teenagers in T-shirts who had camped out overnight in the queue, saw the elegance of tennis whites and tennis balls skimming the grass. I saw this and felt it deeply. Wimbledon is what it is.

As I walked from one court to another, I tried to straighten the circular logic. But what is Wimbledon? I asked myself. My reverie was interrupted when I looked up and realized that somehow, I’d arrived back at the court where I’d begun. There must be a lesson in this, I said to myself, and I laughed.

“I quite agree with you,” the Duchess tells Alice in Alice’s Adventures in Wonderland, after the child concludes that mustard is in fact a vegetable, not a mineral. “And the moral of that is — ‘Be what you would seem to be’ — or if you’d like it put more simply — ‘Never imagine yourself not to be otherwise than what it might appear to others that what you were or might have been was not otherwise than what you had been would have appeared to them to be otherwise.’”

I had been here a few days, and by then I felt half-addled by the hot sun, which was turning so much pale skin around me pink as punch. A ball boy had collapsed; there’d been a fire on Centre Court; the favorites were falling, as they always seem to do here. The cameras were on. Somewhere, someone was royal. A wisp of cloud formed a floating grin. Everything seemed at once Victorian and modern. It is what it is was turning inside out. 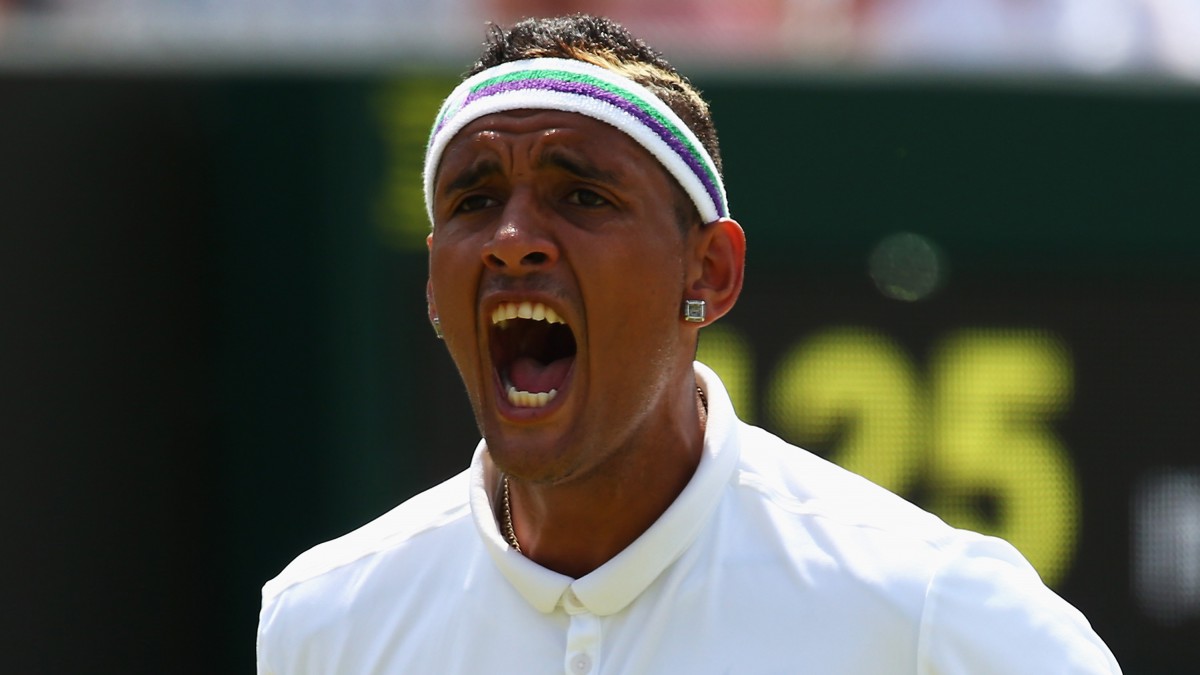 The All England Club was a place to play croquet. In 1877, nine years after it was founded — and 12 years after a mathematician who took the name of Lewis Carroll wrote a story about a young girl and a game of crazy croquet — it held its first championships in a newfangled game: tennis. Lawn tennis, a bastardized version of a much older game, quickly colonized All England’s tidy clipped greens. The club soon dropped ‘Croquet’ from its name but restored it in 1899, just before the turn of the 20th century. It was a kind of protest against a change of which it, like all things, was a part; it was a claim for a history that barely existed. Wimbledon was never as it had ever been. It was trafficking in nostalgia from the start.

Wimbledon always was what it wasn’t, of course. The ivy has always hidden another Wimbledon, a world of weary servants taking refuge in darkened stairwells. From the start, there were grass stains and sweat on the pristine whites; for the ladies, there were drying racks where they hung their stiff and bloody corsets.

And there were characters, thrown into relief by the place’s relentless emphasis on character. (“If you can keep your your head when all about you / Are losing theirs and blaming it on you … ”)

So much insistence on conformity was always an invitation to rebel. The latest participant in this hallowed tradition of bad boys is Nick Kyrgios, who has come to Wimbledon with radioactively pink headphones, and a scuff of blond in his sculpted hair, and wrinkled sleeves — just because. He dances, he rants, he scowls. He taunts umpires, screams profanities, takes off his socks and shoes, hugs the ball boy. He has adopted an extremely charming way of railing against the world.

He plays that way, too. His game is fairly conventional — huge serve, big groundstrokes — but his daring is not. He’ll hit his second serve as fast as his opponent’s fastest first. Today, against Richard Gasquet, he had 23 aces and 10 double faults — including one on match point. He went on to lose the set and then the match, 7-5, 1-6, 7-6(7), 7-6(6). Kyrgios sets off fireworks or self-combusts, and sometimes it’s hard to tell the difference. He is tennis’s teenager — testing limits, exposing hypocrisy. Against Milos Raonic, a big server with a 1950s hairstyle and a 1990s game, he came out wearing a Wimbledon headband — Catcher in the Rye meets the Mad Hatter. The club informed him that the official merchandise broke the official dress code. Off with his head! So Kyrgios turned the headband inside out.

He is charming and infuriating and as much a performer as Wimbledon itself. The talk of the tournament so far is whether Kyrgios is good for tennis or a punk, whether his bad manners are ugly or good for the sport. I am who I am, he shrugs, and dares you to take him on. For that, he’s called “authentic” — which is and isn’t true. He’s an entertainer. The outbursts, the hair … it’s an act, isn’t it? It’s branding, it’s rebelling, it’s a hell of a lot of fun. It’s authentic inauthenticity, or inauthentic authenticity, or —

Overhead the tail of a cat gently melts away. 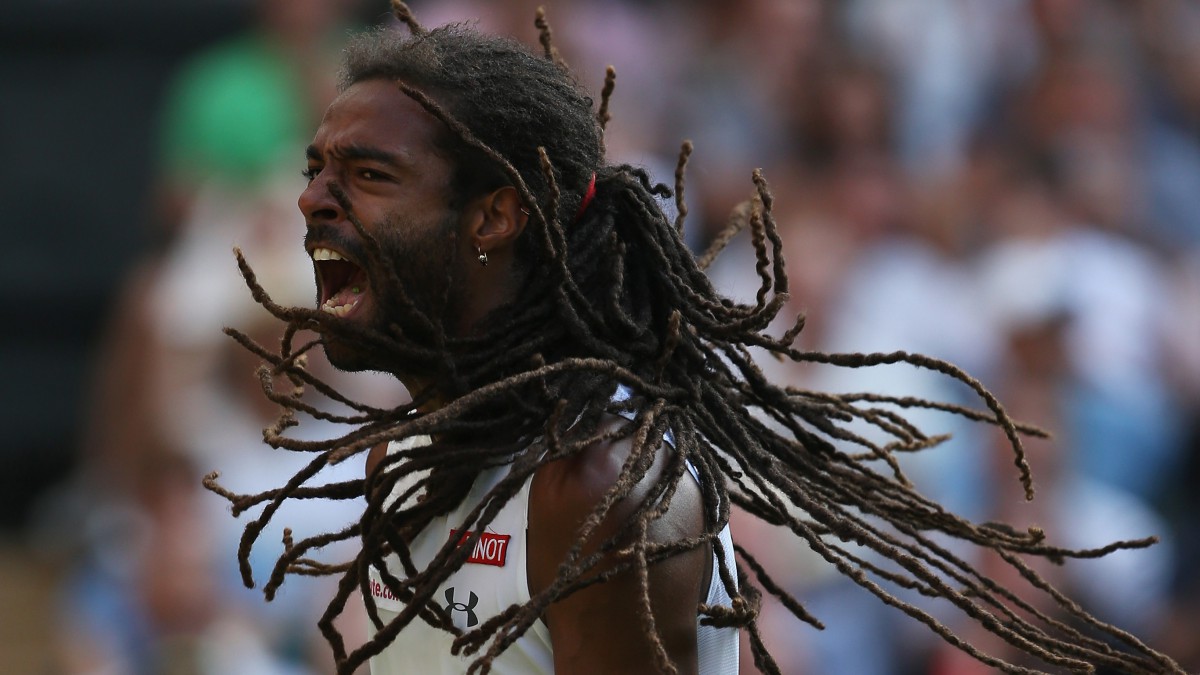 In Through the Looking-Glass, Alice comes upon the sleeping Red King, and Tweedledee and Tweedledum warn her not to wake him, since Alice is only, after all, a figment of his dream. “You know very well you’re not real,” Tweedledum warns her.

“I AM real!” said Alice and began to cry.

“You won’t make yourself a bit realler by crying,” Tweedledee remarked: “there’s nothing to cry about.”

“If I wasn’t real,” Alice said — half-laughing through her tears, it all seemed so ridiculous — “I shouldn’t be able to cry.”

“I hope you don’t suppose those are real tears?” Tweedledum interrupted in a tone of great contempt.

“I know they’re talking nonsense,” Alice thought to herself: “and it’s foolish to cry about it.” So she brushed away her tears, and went on as cheerfully as she could.

In the first match I saw on Centre Court, Rafa Nadal lost to Dustin Brown, a German Jamaican with waist-length dreadlocks, a ranking outside the top hundred, and a game tailored to the grass courts of Wimbledon. Brown’s touch was gentle and fierce; his backhand cut the grass; he seemed at times to soar.

It was tempting to call him another character, a personality, an antidote to sameness. He had a different look, a different story, a different game. But there was a gravity to him, however high he soared. He seemed like a good guy, facing a champion, playing the best tennis of his life. And for the briefest moment, Wimbledon was his, and Wimbledon was real.

“I am the way I am,” Brown said after the match. “I’ve been like this all my life. Obviously it’s great that people appreciate it. But on the other side, if I would worry too much about what people think about everything I do, then I wouldn’t have the hair and probably definitely wouldn’t look the way I look.”

“It’s difficult when people ask me that about myself because for me it’s normal,” he continued later. “I could be sitting here and saying, ‘Why are you guys all different?’ It’s a difficult question. I’ve been like this. I’m not trying to be a certain way. That is how I am, and always have been. Obviously playing this sport, [you] have to adapt a few things to be able to play the sport. But I try not to change myself too much while I’m doing that.” It is only a game, after all.

Against Brown, Nadal’s shots fell short, his forehand broke down. For the past year, nothing has seemed right with Rafa. One day, his body is one thing; another, it is something else. His confidence has grown and shrunk and shrunk. There has always been something childlike about him, a kind of perfect innocence, a faith in the magical order of the world. But now everything is changing; he is learning what everyone learns, even the great champions. He is learning that everything is flux.

He came to the podium in the interview room looking so sad that my heart swelled with sympathy. But he was better than us. It was nonsense, after all, to forget all that he had done here. He had made the finals five times. He’d had some of the best moments of his career in this strange place, where tennis is played — imagine! — on grass.

No one could take anything from him. And anyway, tennis is his life, but it is also just a game. “End of the day,” he said, “that’s sport.”

“You’re nothing but a pack of cards!” Alice cries at the court and wakes up from her dream.

“I am a good loser,” Nadal said, and his face broke into a real smile.