The Death’s-head of Wimbledon, Part 2 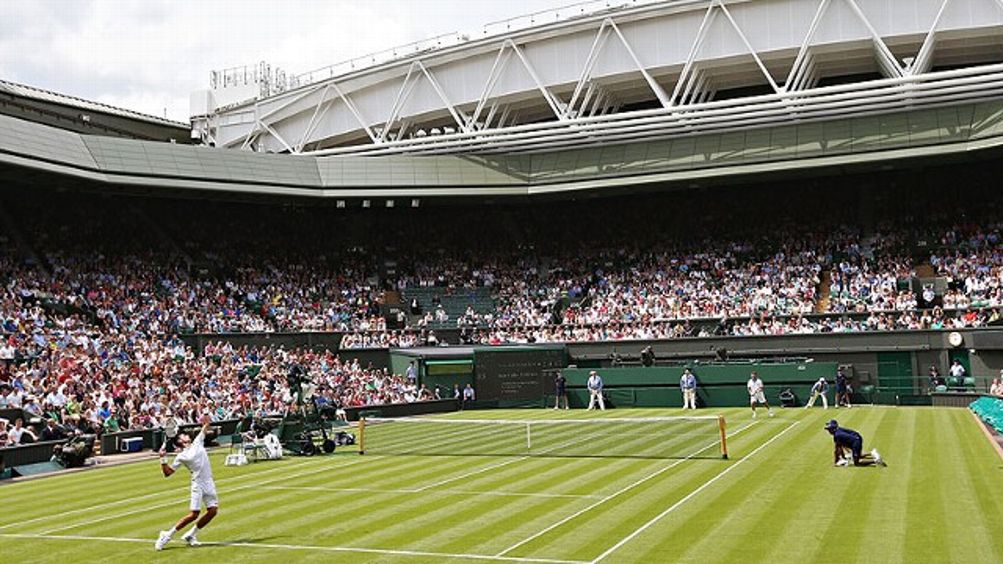 My first two days at Wimbledon were an incomprehensible hell of double-decker buses, foliage, screaming soccer fans, SIM cards, underground zones, shrubbery, security guards, and scaffolding. I checked into my hotel on Saturday afternoon, and at no point since that moment have I understood what was happening, or had working 3G access. I have stood too long beside a hedge at the All England Lawn Tennis and Croquet Club and looked down to find that my arm was crawling with tiny spiders. I have been inside TV control rooms with 80 humming monitors showing views of empty tennis courts. I have had my right to exist challenged by Wimbledon security. I have eavesdropped on two pristinely dressed line judges complaining about the cost of NBA tickets. I have been passed by John McEnroe in a hallway at the precise moment he turned around to yell, “Thanks for the sandwich!”

I landed at Heathrow at around 11 a.m. — mission: cover Wimbledon, the full fortnight, the works — and almost immediately launched on a series of blunders so far-reaching and emotionally catastrophic that it’s a miracle I’m still here at all.  My first mistake was believing I could decode the London bus system using nothing but reason and goodwill. I could have taken cabs, or gone by the Underground, but somehow I’d gotten the idea that I had to ride to the tournament every day on a giant red double-decker bus. This earth, this realm, this whatever, I guess. So when I got to my hotel and found it encased in scaffolding and crawling with construction workers (which it turned out was mentioned on the website, but only if you scrolled down), I set out to escape right away. I stopped at the pub next door for a quick cheeseburger and bourbon, then decided, “Hey, I’ll get on a bus.”

I started out by having the following conversation with a driver on the 131 toward Tooting Broadway.1

I got on the bus. There followed an hours-long odyssey during which I made two important discoveries: (1) that London is, in a way I’d never understood before, a vast and sleeping brain, a neural net crisscrossed with dreams, and that the red double-decker buses are the vessels that carry these dreams; and (2) that the iPhone SIM card I had picked up at a vending machine at Heathrow just 100 percent did not work.

Without GPS, I had no choice but to change buses at random (the way our ancestors traveled), and I made every conceivable error that goes with trying to decipher an information system that works on dream logic. I took the 93 toward North Cheam — like an idiot! — when I thought I was going to Putney Bridge. I missed a stop while watching a cane-carrying blind man have a conversation with a Buddhist monk. I rode out to the blurry fringes of London, feeling myself being carried farther and farther from reality. Eventually I became acclimated to the system and realized that if you just paid attention to the signs it was actually very easy to work out. I now recognize this moment as the one in which I lost contact with reality altogether.

I went back to the hotel. The next morning I rode out to the All England without incident.

I never expected Wimbledon to make sense. There’s something pretty obviously gone about all that tradition, the strawberries and cream, the crisp whites, the lawns. That whole last-hurrah-of-the-Empire vibe that makes Wimbledon (way more than the British Open) the English equivalent of the Masters. I had tried to make some notes about this in the hotel: umbrellas of the Raj, champagne of the 19th century. All that soft, soft rain, like a whisper lulling you to sleep. The notes petered out in a question mark about the exact color of Queen Elizabeth’s lavender-puce Easter outfits.

The moment I arrived at the All England Lawn Tennis and Croquet Club, I was plunged directly into the Apparatus, the gigantic media superstructure that surrounds and engulfs every major international sporting event. At Wimbledon, the Apparatus was so huge, modern, and confusing that it looked like the Enterprise-D had exploded all over Middlemarch. I was directed by polite but firm security guards toward the Press Centre, a labyrinthine above-ground bunker full of massive bundles of exposed cabling and crates of Diet Coke. This was the day before the tournament started, so no one was on the grounds except reporters, photographers, guys carrying fuzzy-sheathed microphones that made them look like chimney sweeps, TV producers, feral herds of ballboys and ballgirls roving in coordinated outfits, beautiful English girls pushing hand trucks loaded with ice, and tennis players, whom you could instantly recognize because they were the blond demigods yelling at their agents in Czech. But the outside was nothing. Upon entering the media centre I was outfitted with a map of camera positions and given a comprehensive tour of various mixing boards. The place was awe-inspiring in its raw adaptation to a purpose. The hallways were fluorescent and grim, but everyone in them knew exactly where they were going and what they were doing. Everyone was both talking and texting at the same time. It was like walking in on the fourth season of an Aaron Sorkin show — I mean one of the good ones — only if “smart friendship” were replaced by “the swift threat of psychological violence.”

My first insight into my future total inadequacy as a Wimbledon correspondent came when I met the WWL’s hyper-competent operations producer for the tournament.

“What are you planning?” she asked. “In terms of what angles are you working, what do you need to get the job done?”

She was very nice. Everyone was very nice. I went outside, sat down at Court 18, and spent five minutes watching a wizened man with a special grass-combing machine comb the grass. It started raining.

When did it happen that the experience of going to a sporting event became less coherent than the experience of watching one on TV? Was that Super Bowl III? The Dream Team? Wimbledon is, in essence, a far-reaching and multilayered network, a system of information flow overlaid on top of a (relatively, in terms of pure scale) small and insignificant tennis tournament. There are multiple rooms of stats loggers; there are research departments; there are cables as thick as your leg; there are swarms of young couriers pollinating the press room with information sheets and quote sheets and hints about Wi-Fi passwords. It’s not chaos, the input/output cycle of the Apparatus; it’s order on full blast, and its single driving purpose is to make two weeks of complex and largely simultaneous tennis effortlessly comprehensible to you, the viewer at home. Every simple story line the media spoon-feeds you is the result of furious analytic labor inside the Apparatus. Johnny Mac can break it down because someone was on hand to give him a sandwich. You don’t catch much of this at home. That’s how the cameras are set up — so you don’t see the other cameras.

When you’re there, though — I mean when you’re at the event, part of the throng, wandering around with your dopey strawberries and champagne — there are no story lines, there are just people who know more or less about tennis. And there’s no escaping the electric hum of the Apparatus. The kids and their boom mikes are everywhere. They’re just not working for your benefit. You’re not there to understand things, unless you just, like, happen to understand them. You, if anything, have become part of the show. You are information to be transmitted elsewhere.3 There’s supposed to be an authenticity about live experience, but it’s an authenticity that can be hard to perceive through the artificial layer that’s there to broadcast a simulation of that authenticity outward. On TV, everything just looks pretty authentic.

The day the tournament opened, due to a complex and nightmarish credentialing problem that had cost me what was left of my sanity,4 I had to camp out on an off-limits photography gangplank high above Court 1, a sort of metal-grill Death Star bridge that runs beneath the roof. This was actually a pretty good place to take in the breadth of the tournament. I had a glimpse of the hill, where the regular people were sunning themselves and browsing the club’s foldout “where to shop” maps. I could see the throngs of earls, trundling down the paths en masse in their crushed khaki trousers and summerweight blazers with geraniums dying in the lapel. The crowd was spread out beneath me like a floral wreath, probably crawling with tiny spiders. And then there was the court, this soft, soft green floating thing, barely part of the scene at all.

It was ambiguous whether I was allowed to be there on the gangplank. Polite but firm security guards kept coming along to evict me. I was confused and sad behind my gigantic sunglasses, and I kept chasing them away by repeating the names of people I’d met in the broadcast-liaison office. Somehow or other this worked. One of the guards looked me over with a mournful expression and said, “Sir, you have no reason to be here.”

Welcome to life on Earth, I thought, but I just muttered: “Lesley said I could be here.”

So I was allowed to go on living.

After a while Federer came out to play Albert Ramos. It was my first time seeing Federer in person. The match was nothing, over in 80 minutes, but to me it was almost astonishingly beautiful. That floating court, the blazing whites, the clockwork ballet of the ball retrievers, Federer making up angles against an opponent who couldn’t stop him. During the breaks a little man in a newsboy cap came out to measure the nets, to make sure they were the right number of centimeters high. I want Federer to win the tournament, for the simple digested–story line reason that he might not have a better chance to win another major. But in a weird way, the match didn’t seem to have anything to do with story lines, or even with the rest of Wimbledon. It was just a discrete, floating event.

From up on my gangplank, the players looked like holograms, or ghosts. And that’s the point of Wimbledon, isn’t it? To make you feel like you can ride the 493 through SW19 and wind up in 1896 (only with fold-out food court maps)? You could squint just a little at Federer and see him as a transparent image overlaid on another match, maybe the Baddeley twins playing doubles in long pants and cricket sweaters, ladies looking on in their towering Victorian hats. Newspapermen scribbling away. I started imagining — I admit this makes no sense — that the British Empire had died, and its skull had come to rest at the All England Lawn Tennis and Croquet Club. And (this is the nonsense part) I thought that its skull had gone on dreaming. And that as long as we were here, all of us were caught up in its dreams. The spectators, the players, me, were all figments in a slow, dark sleep being broadcast live in 200 languages around the world. (Just like the real British Empire.) I had come here to watch Nadal, Murray, Sharapova, and Djokovic, but maybe I was really here to be turned over in two weeks’ worth of dreams. There would be another one tomorrow. I had thought that the rain was the sleepiest part of Wimbledon. Now I wondered whether the rain was really Wimbledon trying to wake up.

I went out to buy an umbrella.