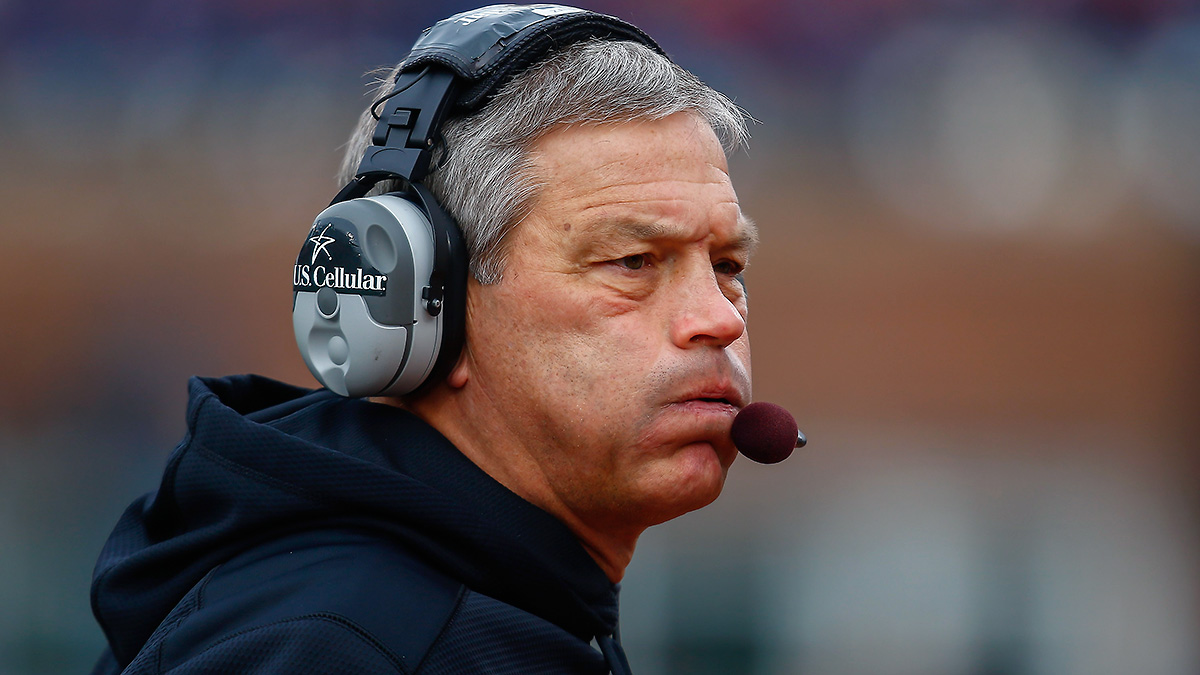 If you’re an Iowa football fan, odds are that you know more about the finer points of Kirk Ferentz’s finances than you do about your own. The specifics of the contract extension that the Hawkeyes head coach signed in September 2010 — 10 years, $39.8 million in guaranteed money, longevity bonuses, impregnable buyout — have joined grandstanding, corndog-inhaling politicians as one of the state’s most enduring obsessions. The pact has been parsed, scrutinized, and lamented (that buyout!) more closely, and for longer, than any other in college football. At this point, in the right context, it can even serve as a punch line.

In part, that’s because of the deal’s sheer expanse: Besides Ferentz, the only other incumbent coaches currently under contract into 2020 are Nick Saban and Jim Mora, both of whom signed extensions in the past two years. The only other coach in recent memory who managed to wring a one-time, 10-year deal from his employer is Charlie Weis, who continues to reap the benefits of his infamous 2005 contract extension at Notre Dame more than five years after getting the axe. In much larger part, though, it’s because the farther the Hawkeyes have moved from the sense of progress that made such long-term largesse once seem sensible, the larger the cost of overturning that status quo has seemed to loom.

“It’s been five years now of unremarkable football, is probably the best way to put it,” says Marc Morehouse, who took over the Hawkeyes beat at the Cedar Rapids Gazette in 1999, the same year Ferentz arrived in Iowa City, and who has seen more than his fair share of unremarkable football. “I’ve covered Ferentz since he’s been here, and the ‘hot seat’ concept has come up in the past, but I’ve never taken it seriously. … I’ve never bought into it, but this year, even in November, even in January after [the bowl game], I’m buying into it. OK, this is a real hot seat now. This is a hot seat year, no question about it.”

Ironically, when Ferentz signed up for another decade at the helm, his ability to project long-term stability was his most obvious selling point. Here was a man with staying power: At the time, he’d already served 11 years at Iowa, surviving a 1-10 debacle in his first season to claim a share of the Big Ten championship in 2002 and 2004; more recently, the 2009 Hawkeyes had opened the season on a surprising, nine-game winning streak, and closed with a 24-14 victory over ACC champ Georgia Tech in the Orange Bowl, thereby securing Iowa’s best finish in the AP Poll (seventh) since 1960. By 2010, Ferentz already ranked second in school history for both longevity and victories, trailing only his long-serving predecessor, Hayden Fry. Even beyond the record, with his sandy gray hair, perpetually annoyed expression, and unflattering khakis, Ferentz gives off a quietly competent, dad-like vibe, the embodiment of the kind of coach you could easily imagine being cast in a terrible movie in the role of Generic Coach No. 2.1 His teams, like Ferentz himself, were predictable, nondescript, and, because they almost always won more than they lost, largely unobjectionable.

On the other side of an extended bout of mediocrity, though, the same qualities that looked like virtues when the Hawkeyes routinely exceeded expectations now lead the list of complaints. It’s not that the team is bad: With the exception of a 4-8 collapse in 2012, Iowa has delivered a winning overall record in six of the past seven seasons, including an 8-5 mark in 2013 and a 7-6 finish last year. But it is undeniably boring, even by the standards of a conference that’s not exactly known for its receptiveness to up-tempo, cutting-edge styles of play. That’s partly by design; after all, the Midwest at large, and the state of Iowa in particular, is much better at producing offensive linemen than dynamic skill players, and Ferentz, a former NFL offensive line coach with the Browns and Ravens, has a solid track record of turning those linemen into viable pro prospects. A certain patience for sitting through old-school slugfests is baked in. “There’s a segment of the fan base that would lose their mind — in a bad way — if Iowa went spread, or went to anything other than meat-and-potatoes, two-tight end football,” says Patrick Vint, one of the founders of the long-running Hawkeyes blog Black Heart Gold Pants, who declares himself in his author’s profile to be “Steadfastly dedicated to three yards and a cloud of dust.” He adds, “Iowa fans will watch something that’s boring and wins.” 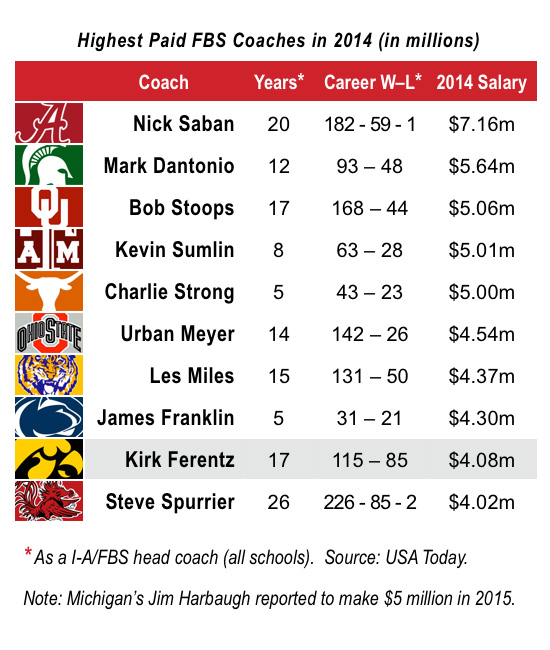 Over time, though, the meat-and-potatoes philosophy has also seemed increasingly likely to turn every game into a tractor pull that ends with a score in the neighborhood of 21-17 — Morehouse compared watching the offense under fourth-year coordinator Greg Davis to watching “frozen cement” — and over the past five years Iowa has come out on the wrong end of too many of those slogs. More to the point, the Hawkeyes have come out on the wrong end against the wrong teams, their main annual rivals: they’ve dropped three straight to Wisconsin, three of their past four to Iowa State, and four of their past five to Nebraska.2 In 2014, they went 0-4 in “trophy games” – rivalry matchups in which the winning side lays claim to a weirdly specific piece of hardware until the teams reconvene the following year – including a 20-17 defeat at the hands of a rock-bottom edition of ISU,3 followed in November by a 51-14 humiliation at Minnesota and a 37-34 loss to Nebraska in which the Hawkeyes blew a 17-point lead in the second half.

After the collapse against the Cornhuskers, Ferentz seemed to shrug off the result, telling reporters, “That’s football. There’s ebb and flow.” The floodgates opened: “He said, ‘that’s football,’ and people kind of went nuts,” says Morehouse, who later compiled more than 250 angry fan emails addressed to athletic director Gary Barta. The next time out, Iowa was annihilated by Tennessee in the Gator Bowl4 — the Vols led 42-7 after three quarters, a more accurate indicator of how the afternoon unfolded than the 45-28 final score — sapping whatever reserves of goodwill remained.

“The record itself was a disappointment, but the way they did it really rubbed people the wrong way,” Vint says. “Last season really left a bad taste in people’s mouths, and a lot of season-ticket holders just simply did not renew this year. We’ve heard tales of groups of 25 to 30 in certain towns that would all renew together that are down to a handful. People just don’t want to spend the money or the time to drive up here and watch a team that really hasn’t performed that well at home.”

The money is very much an issue, and of the ostensible barriers to ditching Ferentz if he delivers another mediocre turn in 2015 — as virtually everyone who has ventured a guess this summer has predicted — the buyout may turn out to be the easy part. For one thing, the magic number is reportedly below $10 million, hardly an outlandish figure for a school that has seen its overall athletic revenue increase significantly as a result of the Big Ten Network and other media-generated payouts from the conference. There were also rumors at the end of last season that some boosters were willing to foot the bill for Ferentz’s buyout if Barta had been willing to ask. At the same time, keeping an unpopular coach around for the long haul is never a cost-effective strategy. Iowa has hosted only one home sellout over the past two seasons, the 2014 loss to Iowa State. Season ticket sales for 2015, already trending downward over the past few seasons, are expected to decline by more than 10 percent compared to 2014, contributing to a projected $3 million shortfall in football income. Meanwhile, the university just asked the state’s Board of Regents to approve an upgrade of Kinnick Stadium that could cost as much as $45 million.

“No one’s saying this on the record, but it’s becoming more and more obvious they’re going to have the money to fire Ferentz if they want,” Morehouse says. “Eventually the question is going to become, if there’s no buzz, or excitement, whatever it is that gets people in the stands for Iowa football, then there’s going to come a point where they can’t afford not to fire him.”

Still, if push comes to shove this winter, the hardest question may not have anything to do with whether Barta can afford to pull the plug. Instead, if he finds himself on the fence, it might come down to whether he’s actually willing to make such a far-reaching decision if the on-field results don’t make the decision for him. Expectations are as low as they’ve been at any point since the earliest days of the Ferentz era, meaning they may also be easier to exceed. And the 2015 schedule is relatively friendly: There’s no clear-cut, invulnerable front-runner in the Big Ten’s West Division, and the Hawkeyes don’t have to play either of the heavy hitters from the East, Ohio State and Michigan State; they’ll also miss Penn State and Michigan, and get their toughest nonconference test (against Pittsburgh) in Iowa City. It’s entirely possible that, with a few breaks, Iowa could win eight or even nine games and land another January bowl bid without notching a needle-moving win.

Barring a division title, though, what will progress look like? What if, say, the Hawkeyes finish 7-5, but close with strong November efforts against Minnesota and Nebraska? What if they improve to 8-4, but lose steam down the stretch, or suffer a couple of embarrassing losses on the order of last year’s flops against Iowa State, Minnesota, and Tennessee? If Barta isn’t willing to cut Ferentz loose after another good-but-not-great campaign, will he be willing to give his coach a new contract as a vote of confidence, if for no other reason than to reassure recruits that they’re not signing up to play for a lame duck? If the 2015 edition turns out to be what Iowa has been for most of Ferentz’s tenure — a seven- or eight-win outfit that lands in a respectable bowl game — there will be no easy answer, and the outcome will likely hinge on what the eye of the beholder sees.

“I think if Ferentz goes 8-4 it would be unprecedented for the University of Iowa to fire an 8-4 coach,” Morehouse says. “This is probably going to piss off a lot of Iowa fans, but 8-4 for Iowa, historically, is a pretty good season. The Outback Bowl is a good season. But then you look at the schedule and think, what kind of 8-4 is a good 8-4?”