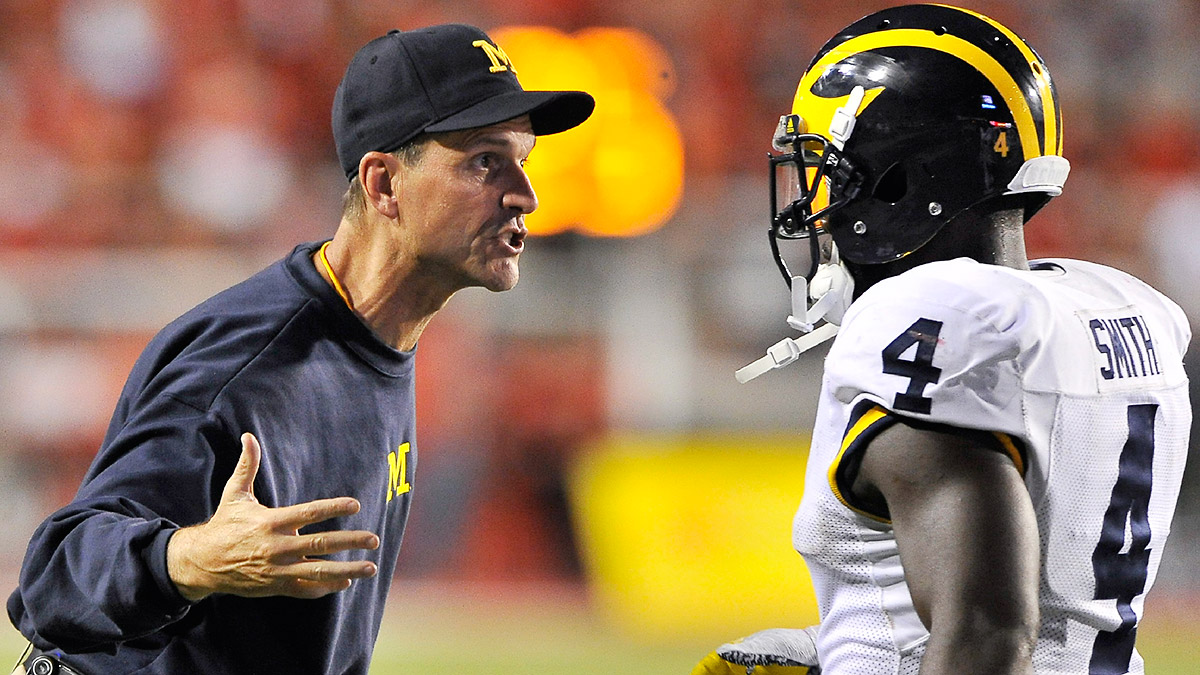 OK, Wolverines fans, let’s start with the good news: It was only the first game. The first one! In the long run, it means nothing. In a few years, you’ll look back and laugh. Chip Kelly lost his first game as Oregon’s head coach, also on a Thursday-night road trip, and it was a whole lot uglier than anything that happened in Jim Harbaugh’s Michigan debut at Utah. Pete Carroll lost four of his first five games at USC. Jimbo Fisher was blown out of his first road game as Florida State’s head coach by 30 points. Nick Saban didn’t lose his first game at Alabama, but he did lose to Louisiana-Monroe later that year. It could have been much worse, as you well know.

Most of the dumbest things I’ve ever written have resulted from overreacting to an opening night. Lest you forget, at this time last year, the college football hive mind (led by yours truly) couldn’t move fast enough to anoint Texas A&M’s Kenny Hill as the second coming of Johnny Manziel based exclusively on Hill’s first career start, an opening-night romp over South Carolina; within two months of his scintillating debut, “Kenny Trill” had been permanently relegated to the bench, biding his time until his inevitable transfer at season’s end. No one has any special insight into how the rest of the 2015 campaign will unfold from here, and no one is destined for the scrap heap just yet. Utah is no cupcake; maybe in a month or two we’ll look back and recognize Thursday night as the opening act in the Utes’ emergence as a surprising powerhouse. It’s early.

Here, enjoy Harbaugh trying and failing after Thursday night’s loss to say the name of his best player, tight end Jake Butt, without channeling the spirit of the universal 11-year-old who governs all human reaction to references to anatomy and bodily functions:

Now that you’re in a more cheerful mood and are less concerned about the ultimate takeaways from the season premiere of Harbaugh Mania, let’s talk about Michigan’s on-field performance, which was admittedly not encouraging. Offensively, it was a borderline debacle. Prior to a final, ultimately futile touchdown drive that cut the eventual margin of defeat to seven points, Michigan had managed just 275 yards of total offense, less than it gained in last year’s loss to Utah, when the offense was so bad that fans who had to evacuate Michigan Stadium during a second-half lightning delay didn’t bother to come back once the game resumed. The tailback rotation of De’Veon Smith, Ty Isaac, and Derrick Green combined for 60 yards rushing on 2.6 yards per carry, with a long gain of seven. The new quarterback, Iowa transfer Jake Rudock, was the exact opposite of the safe, plays-within-the-offense caretaker that Michigan fans had been led to believe they were getting — last year, Rudock threw just five interceptions in 345 attempts as a Hawkeye — instead serving up three picks on 43 attempts against the Utes. The last of the three, the play destined to serve as shorthand for the night as a whole, was an ill-advised pass that resulted in a dagger pick-six and left fans (and even the FS1 commentators) wondering how long Harbaugh would stick with Rudock … and why he’d stuck with Rudock after the first two picks in the first half … and why he’d tapped Rudock over once-touted junior Shane Morris to make the start.

Of course, for anyone who watched Morris struggle through his limited appearances the past two years, the answer was obvious: He wasn’t ready then, and if he couldn’t get on the field in Salt Lake City, then the odds at this point suggest he’s never going to be. If the new coaches had any faith in Morris to hold down the job, they wouldn’t have pursued a retread like Rudock (who wasn’t exactly viewed as a prized commodity on the graduate-transfer market) in the first place. But if the onetime heir apparent at quarterback has failed to grow into the role as an upperclassman, the same can be said for most of the rest of the offense, especially the line, which last night consisted of the same starting five that struggled through 2014, and delivered the same results.

Although it probably shouldn’t have come as a surprise — and for the more realistic segments of the fan base, probably didn’t — most of the answers after Thursday night’s flop wound up circling back to that same, sobering reality: After the initial wave of euphoria that greeted Harbaugh’s arrival last winter and the globe-trotting, SEC-baiting sideshow that followed, the fact remains that the team he inherited is essentially the same one that staggered to a 5-7 finish last year, and that team is (still) not very good. The foundation in Ann Arbor looks nothing like the one that, say, Urban Meyer inherited at Ohio State, which was coming off a 6-7 debacle in 2011 when it hired Meyer but was primed and ready for the 12-0 campaign that followed in his first season. But neither is it as dire as the one Harbaugh inherited at Stanford, in 2007, which was so far in the hole that it took two full years and the promotion of Andrew Luck to the starting lineup just to climb above .500. Even if there’s no future equivalent to Luck in the pipeline,1 it’s not going to take that long at Michigan. But getting things back to where Wolverines fans take for granted that they should be is obviously going to require a lot more than enthusiasm unknown to mankind.

Even Steve Spurrier couldn’t help but shake his head at the staggering inefficiency of North Carolina’s offense, which moved the ball at a solid clip against the Gamecocks (440 total yards on 6.9 yards per play) but seemed determined to avoid putting it in the end zone.

No it don’t, but at least the source of the foggy arithmetic was no mystery. UNC’s gifted but erratic quarterback, Marquise Williams, accounted for a little more than half of those yards, but was also responsible for three interceptions inside the South Carolina 25-yard line. Bizarrely, two of those picks came on identical, point-blank throws directly into the numbers of SC linebacker Skai Moore in the same end zone, thwarting drives of 58 and 80 yards, respectively, in the first and fourth quarters.

Seriously, as a fifth-year senior making your 20th career start, after you’ve already cost your team points on this throw …

… how on earth can you come back with this one?

As I said on Twitter last night, watching this game often felt like watching two dogs sprinting hectically from one end of the house to the other after coming in from a long road trip, as South Carolina’s first-time starter, Connor Mitch, wasn’t much better than his counterpart. (Mitch finished 9-of-22 passing for 122 yards, and had at least one gift-wrapped interception dropped by a North Carolina defender with a clear path to a touchdown.) Combined with the fact that the Tar Heels’ best offensive weapon, tailback Elijah Hood, earned only 13 carries despite averaging 10.6 yards per touch, UNC’s red zone failures in an imminently winnable contest against an SEC opponent are going to haunt coach Larry Fedora, who needs every win he can get.

Offensively, the Horned Frogs weren’t very sharp and left an awful lot on the table: Excluding their first touchdown “drive,” which began at the Minnesota 15-yard line following a Gophers fumble, the Frogs’ other seven trips inside the Minnesota 35 yielded three field goals, two turnovers, a missed field goal, and a lone touchdown. If TCU didn’t have the ranking posted next to its name, no one tuning in at any point would have pegged the Frogs as the no. 2 team in the nation.

At the same time, though, the outcome was never really in doubt, and even after allowing a late touchdown drive that cut the final margin to six points, the Frogs outgained a presumably decent Golden Gophers outfit by more than 100 total yards; quarterback Trevone Boykin overcame bouts of sloppiness to account for 338 total yards and both TCU touchdowns (one passing, one rushing), which is just fine as far as his Heisman odds are concerned. Barring a big surprise from the bottom half of the Big 12 schedule, there’s still no reason to expect the Frogs to be challenged until well into November.

That anyone outside the state of Arizona was compelled to acknowledge this game at all could only mean bad news for the Wildcats, and it was the worst news:

If you missed it… pic.twitter.com/mZYFgjR8BR

That hobbled, jump-suited figure is Arizona linebacker Scooby Wright III, the most decorated returning player in the nation, who limped off the field in the first quarter with an unspecified leg injury that may or may not spell disaster for the rest of Zona’s season. (Coach Rich Rodriguez and Wright’s father both downplayed the seriousness of the injury after the game, though neither offered a specific diagnosis; the results of a postgame MRI haven’t been released.) With their headliner on ice, the Wildcats wound up yielding 525 yards and 32 points to a team that ranked dead last in Conference USA in 2014 in scoring offense. If Wright is out for any extended period of time, the corresponding inflation rate against Pac-12 offenses could be catastrophic.

Leave it to Vanderbilt to hold one of the highest-scoring offenses in the nation in 2014 a full 30 points below last year’s average and still wind up losing in ghastly fashion.

Vanderbilt, for the tie. https://t.co/6bJuTTi2z1

The failure of the Commodores’ last-gasp two-point conversion attempt sealed the first victory by a C-USA team over an SEC opponent since 2010.2 Not that anyone had outsize expectations for Vandy coach Derek Mason’s second season in Nashville after last year’s 3-9 debut, but considering how few wins are likely to be had in conference play, letting a nonconference contest slip away against what should be the designated W is an ominous sign for the rest of the year. Thus concludes our analysis of the 2015 Vanderbilt Commodores.

A special nod is in order for Western Kentucky cornerback Branden Leston, who took advantage of the unexpected free time following his ejection for targeting in the third quarter to post his thoughts to Twitter while the game was still in progress:

They taking the fun out of playing defense….smh

Thank you, Branden. We eagerly await your analysis next week when you’re serving a mandatory first-half suspension against Louisiana Tech.

Next Man Up: Arkansas State and Surviving the Revolving Door