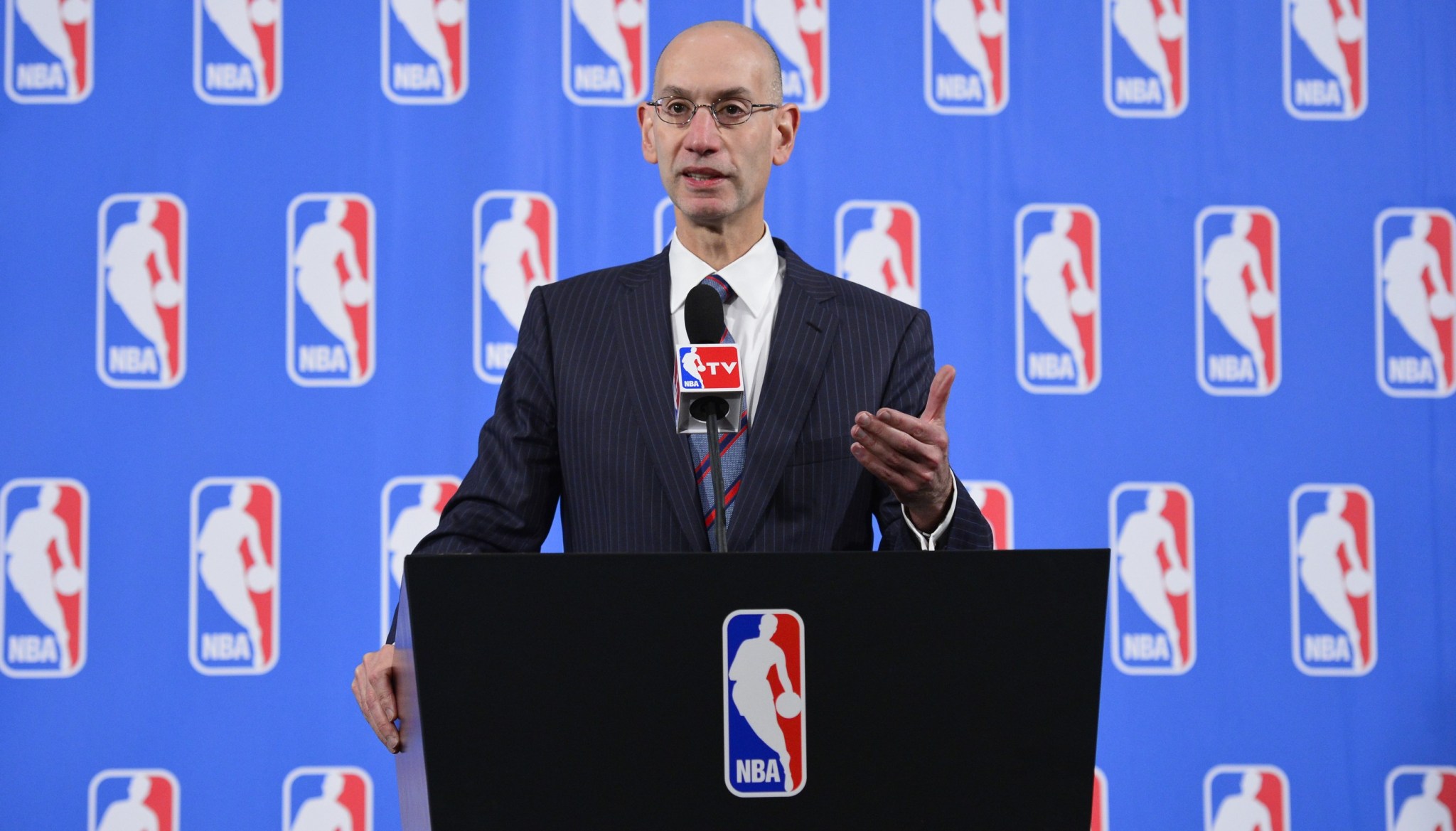 This is what Michele Roberts, the union’s executive director, told Davide Chinellato of La Gazzetta dello Sport about the state of talks between the union and the league (translated here from Italian):

“[Adam] Silver and myself want to do everything possible to prevent the NBA to stop: the only way is to negotiate. We have already started, we will meet again in early September with the hope to announce within the end of the season that the union and the league have solved their problems.”

Some of this could be bluster, and some of this isn’t completely accurate. The league and the union have not held a formal bargaining session, per sources on both sides, though they are working to schedule one soon. Both sides have flip-flopped between apocalyptic rhetoric and nicey-nice talk, and we should always assume all public comments are negotiating tactics designed to nudge the scales of leverage. Perhaps Roberts recognizes the players are munching half of an ever-growing revenue pie and don’t have the resources to outlast hawkish owners who might want to hog more than half of that pie. Roberts may be pressuring Silver to massage those hawks so the money train can roll on.

Maybe it’s just talk, but look at the last part of that quote: Roberts appears to be saying that she and Silver have explicitly discussed a timeline that would have them resolve all bargaining issues by the end of this season — six months before each side has a one-time-only chance to opt out of the collective bargaining agreement, which otherwise runs through 2021. It’s one thing to smile at each other onstage. It’s another to have private talks about specific and hopeful timelines.

Roberts confirmed via email that she and Silver have indeed talked about those specifics, but she added a cautionary note: “That is accurate,” Roberts says. “That is the goal. We did discuss that timeline, though it is not a deadline. It is more aptly described as an aspiration or goal.” Silver declined comment through a league spokesman.

There is a rising tide of optimism among ownership sources, player agents, union officials, and other stakeholders that the league might avoid the once-assumed lockout of 2017. Everyone knows the league is doing phenomenally well. The NBA generated more revenue than projected in 2014-15 for the second straight season, and the new national TV megadeal, which will pay the league an average of $2.7 billion per season, doesn’t even kick in until 2016-17. Total league revenues, which recently hovered just south of $4 billion per year, will leap past $7 billion by 2017-18. Players don’t get as much of that as they used to, but their 50 percent share, down from 57 percent under the prior CBA, will still net them enough that the average player salary will shoot up to about $8 million in a few years.

This is why I’ve been on record as a lockout optimist for the last 15 or 18 months. There are issues big and small that irk both sides, but business is just too good now for either to risk a work stoppage. The rising cap has mid-career players signing deals they had never imagined possible; do Cory Joseph, Aron Baynes, Khris Middleton, and other rank-and-file members really want to forfeit one year of those contracts so that stars above their pay grade can fight about maximum salary limits?

Baseball’s audience is aging, the NFL has to navigate the concussion issue, and hockey and soccer just can’t touch the NBA’s domestic popularity. This could be the NBA’s moment. So, memo to owners, players, agents, union people, and everyone else: Can we just not screw this up?

That’s easier said than done, of course. Silver proclaimed at summer league in Las Vegas that several teams were still losing money. This was treated as a bombshell, but it really shouldn’t have been. Nine teams lost money in 2013-14, according to internal league documents, and with the new TV money still years away, there wasn’t much reason to expect that to change in 2014-15.

The new TV money won’t bring everyone into the black right away, even though each team will receive nearly triple what it gets from the current national TV deal. Remember: Half of that money goes to players, so total player salaries — a huge expense — rise in lockstep with the influx of TV money. The salary floor for teams this season will be about $63 million. In 2017-18, when the cap should be about $108 million, the floor will leap to $97.2 million. That $34 million increase eats up some of the extra TV cash each team will rake in.

There are some other quirks that might make it hard for some small- and mid-market money-losers to turn profits in the first year or two of the new TV deal. The league will bring in so much revenue that total player salaries across all 30 teams won’t add up to the required 50 percent of the overall pie. The league calls that scenario a “shortfall,” and Silver said in July that that shortfall could reach $500 million in 2016-17 — the first year of the TV deal. When that happens, the league simply dips into an escrow fund set aside for exactly this purpose and writes the players’ union a check for the shortfall amount (which is then equally split among the members). The players get their 50 percent share one way or another.

So why does it matter if the players get that 50 percent share from their original salaries, or from their salaries plus that shortfall check? What’s the difference? Why did Silver frame the shortfall as something the league would be concerned about?

It amounts to this: Each team pays an equal one-thirtieth share of the shortfall, regardless of market size, profitability, and whatever else. If the shortfall is $500 million, the Bucks and the Lakers chip in the same amount. In past years, small-market teams could count on tax payouts from big spenders with payrolls well above the tax line — distributions that could cushion the blow of an extra expense like a shortfall check. But only four teams paid the tax last season, and with the cap and tax lines set to skyrocket, the league could experience a temporary blip in which those tax payouts almost vanish.

Add it all up, and a few teams might feel a profitability crunch over the first year or two (or three) of the new TV deal — even with all of that cash flooding the system. The owners of those teams might look at a lockout as the chance to seize another percentage point or two of total league revenue from the players. One percent of $7 billion is larger than one percent of $4 billion; every percentage point means more now. Those owners also understand that the 2011 lockout, as ugly and protracted as it was, did not interrupt the league’s soaring popularity curve. The new national TV deal requires broadcast partners, including ESPN, to pay the league even during a work stoppage, according to league sources. Owners would lose gate receipts from canceled games, but these are billionaires with a locked-in TV mega-deal. They can outlast the players, and they know it.

This is when you say: too bad. The owners could solve a lot of these issues by tweaking the way they share revenue among themselves, and a cadre of small- and mid-market teams are already quietly waging that battle. The Lakers paid out $50 million in revenue sharing in 2013-14, per those league documents, and still made a $100 million profit. They could fork over more, at least over a short period. And some of the teams that suffer on-paper losses in their basketball operations division make up for them in other ways. The Nets have been the league’s biggest money-losers over the last two years, but that is mostly their fault for spending stupid amounts on players who weren’t worth it, and Barclays Center prints money.

The league’s revenue-sharing system is a maze of equations, benchmarks, and other triggers that determine how much a team pays or receives. Some teams play in markets so large that they are prohibited from receiving any revenue-sharing money at all. Others have to hit minimum revenue benchmarks, based in part on market size, to get their fair share. There are also rules that cut off the revenue-sharing fountain once a team has reached a certain (very small) level of profitability for that year, per several league sources.

It is freaking byzantine. There will be proposals for funneling the money around in different ways as the system adjusts to the jolt from the national TV deal. That fight doesn’t really involve the union or collective bargaining.

Teams that scrap to break even now should leap into profitability as their local TV and sponsorship deals expire, allowing them to negotiate new ones that reflect the happy state of the league. The Clippers just emphatically turned down an offer from their local Fox Sports affiliate that would have paid them 2.5 times more per season than they get from the current local TV deal, and they were absolutely right to do it.

There may be a period of very slight financial pain for some teams as the league’s new reality sets in, but the best projections we have suggest those teams can withstand that turbulence, especially with enhanced revenue-sharing, before settling into better times. And we haven’t even mentioned that any of these owners could sell now for prices that are three, four, five, and six times what they paid for their teams. Some owners could dig in and probably do a little better over the short term — even with canceled games. It just may not be worth the bad press, endless meetings, labor trauma, and the small risk of disturbing every healthy long-term trend.

Also, don’t listen to any doomsday talk about these bloated player salaries — how Anthony Davis and Stephen Curry could make $30 million per season, and LeBron could crack $40 million at some point. Those numbers are huge in raw terms compared with old salaries, but not in relation to the cap. Star players are making more only because the league is making more. Max salaries are set as a percentage of the team cap, and 30 percent of $108 million is naturally more than 30 percent of $60 million. Salaries north of $30 million aren’t the sign of a broken system. They are what players deserve under the current system.

Stars have argued they deserve more, and if they want to agitate for unlimited individual player salaries, that is the sort of fight that might derail labor peace. That would change the economics of the player-sharing system in ways we can’t even anticipate. It would redefine the landscape of the league. It would also hurt the vast majority of players.

Other system issues don’t have the same kind of foundation-shaking impact, and both sides are free to negotiate those without opting out of the CBA. They could talk about the age limit now. Roberts and Silver could meet today about raising salaries for first-round picks, so that they more accurately reflect the current cap environment. Want to adjust the minutiae of restricted free agency? Talk about it over dinner next week.

The system isn’t totally fair to everyone, of course. No rickety set of socialistic principles piled atop a capitalistic league ever will be. But the NBA has a chance to do something special here, and everyone needs to think very hard about whether they want to rock the boat.