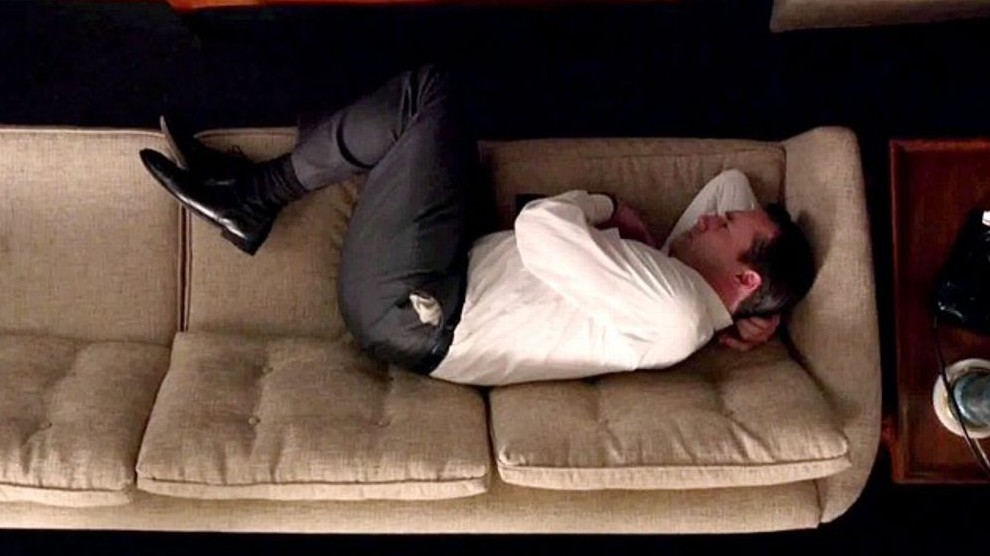 With Mad Men’s final run of episodes set to begin on Sunday, the Internet is about to be overwhelmed with “Best Episode” lists, “Best Dressed Character” lists, and “Most Unpleasant Roger Sterling Racism Moment” lists. Mad Men is a triumph and much will be written about its patience with story, its sumptuous design, its Hall of Fame–level performances, and its well-rounded characters. But what’s the point in piling on to this stinky ’60s hippie love-in? I happen to be much more interested in the moments when perfection eluded the show; even the 2001 Lakers lost a few times. When a television series is this good, it’s tempting to look for the cracks in the façade just to prove that its creative team is fallible like the rest of us.

I combed through the show on Netflix, rewatching the episodes I remember as underwhelming with the hope that I could find the worst of the bunch. Keep in mind, I’m not saying any of these episodes are bad in the traditional sense. No episode of Mad Men should be considered objectively terrible when we live in a world where Sex Box exists. These episodes suffer only when compared to the heights of “The Wheel,” “The Suitcase,” and the one where Don hallucinates Shelly Johnson from Twin Peaks.

As I started the laborious process of narrowing down the worst episode of Mad Men, I asked around Grantland HQ in the hopes of finding a consensus pick early. More than one person name-checked this episode immediately. It’s remembered mostly for those godforsaken flashbacks to Dick Whitman’s childhood, the purpose of which is to show that Don Draper learned a lot about life from a kindly bum and that his father was a miserly old jerk. No one likes these flashbacks. If someone tells you that they like these flashbacks, they’re lying to you. I suggest you never trust that person again, because what else could they be lying about? Is that even their real name?!

Confident that I had my choice, I rewatched the episode with my knives sharpened. I was very surprised to find that “The Hobo Code” is mostly an excellent piece of television. In particular, Elisabeth Moss and Vincent Kartheiser eat this episode’s lunch, toss the episode in a dumpster, and then laugh about it on their way home. Yes, they’re that good.

This is the fateful episode in which Peggy and Pete have sex in his office, Peggy has her first career triumph,1 and Sal is forced to grapple with his sexuality in one of the most subtle seductions I can remember on TV. First and foremost, this is a great Peggy episode. Moss takes us from the highs of her Belle Jolie success to the lows of Pete’s cruel rejection at P.J. Clarke’s. This episode is 80 percent hot flame and 20 percent Dick Whitman eating gruel while his mom sweats motor oil. It’s just too good to qualify. I had to move on.

The debut of “Fat Betty” got a look because there may not be a less satisfying, more embarrassing subplot in the entire series.2 When a drama gives a character an artificial weight gain story line, it’s usually intended to be a tragic turn of events. The character has slipped in some sense or lost their mojo. Season 3 of Battlestar Galactica put a few extra pounds on Lee Adama to visually illustrate that he’d gone soft since our heroes had settled on New Caprica. Instead of inspiring pathos, it became one of those memes I’ve heard the kids are into. In both the cases of Fat Lee and Fat Betty Draper, the cheap TV makeup has the unintended effect of being completely hilarious. It almost always looks terrible when you try to make someone appear fat who clearly eats broccoli florets with a slice of lemon for every meal. Also, you could subtitle this episode “Enter Ginsberg,” because this is the first time Ben Feldman stammered his way into our hearts.

That last part is sarcasm, of course. Ginsberg sucks. I hope he went back to his home planet or some shit.

This is the one where Cutler invites his quack doctor to the office to give everyone speed so they can work more. I usually feel embarrassed for actors who have to pretend to be high, so that might color my response to this episode. Plus, the egregious hippie wandering the halls of SCDP/CGC is like a manifestation of the writers, constantly explaining the themes of the show while it’s happening. She can’t hear Don’s heartbeat! Don doesn’t have a heart! Wow, what a revelation! The B-plot isn’t any less bizarre: Sally and Bobby are greeted by an older black woman claiming to be their “Grandma Ida,” who might be mentally unstable but is definitely robbing their dad’s apartment. I will admit that for a moment I entertained the possibility that Sally and Bobby had a secret black relative who would be joining the show as a full-time cast member. That might have been wishful thinking on my part, actually.

As you would expect, a Don drug experience leads to yet another flashback to his childhood. This time, we get to see Dick Whitman lose his virginity to a prostitute. Learning that Don was molested by a much older woman explains some of why he’s incapable of real intimacy, but it has the unintended effect of reducing much of the mystery around the character. I was very tempted to pick this episode, but the insanity of it all is actually quite entertaining. It makes me laugh, and I could watch Ken Cosgrove dance for hours.

But, as a great man once said, there can be only one. After much soul-searching, many sleepless nights, and a brief detour to write an essay extolling the virtues of Stan Rizzo’s beard, I came upon my winner (loser?)

The Worst Episode of Mad Men

This episode has got it all: Ted Chaough dressed like he just escaped from the Scientology Sea Org, Don’s turgid love affair with Sylvia Rosen, and MORE DICK WHITMAN FLASHBACKS!

Once more, for the record: These flashbacks are the least entertaining part of the series. The “old timey” dialogue sounds ridiculous; even if it’s accurate to the period, the actors very rarely sell it. The very concept of Dick Whitman’s world comes off as half-assed and cheap, full of Great Depression clichés. The kid who plays Dick looks like Alfalfa from The Little Rascals after he read way too much Schopenhauer. Nothing can save this episode from being weighed down by all the hillbilly slang and stereotypical cornpone nonsense.

It should also be said that I do not need every little detail of Dick Whitman’s life dramatized for me. In Season 6, Don flashes back to the brothel in multiple episodes, culminating in his meltdown in front of the Hershey’s team. The flashbacks are meant to prepare us for the moment when Don shows his kids where he grew up that concludes the season finale. Sure, Don’s a fascinating figure that we all want to analyze, but being given the answers to our questions is actually pretty unsatisfying. It’s like wondering where babies come from, imagining that a giant bird flies around dropping children from the sky, but then finding out the reality is that they come from 15 minutes of brutal grunting in a broom closet.3 Whether it’s through lack of resources or lack of attention, the flashbacks are an underwhelming version of what could be. But even if they were shot by Terrence Malick with a gold-plated camera, it would still be the Mad Men equivalent of learning that Anakin Skywalker became Darth Vader because his mom wasn’t around to love him enough. Some things are better off being implied rather than explicitly shown. Don’s story about his miserable childhood in the Hershey’s meeting is 10 times more compelling than actually seeing some fake-ass Tom Joad shoveling dirt while Emo Alfalfa sulks in the corner.

There’s not much else in this episode to elevate it past the Amazing Adventures of Dick Whitman. The other story threads and elements aren’t bad, but they’re not on the level of Peggy’s journey in “The Hobo Code.” It’s an average Mad Men episode with a teenager’s crude drawings scribbled all over it. Pete’s shitty treatment of the neighbor he seduced works well enough, but it’s nothing revelatory. We see more of Don’s affair with Sylvia, a plot that isn’t all that different from the 80 other times Don cheated, except with extra Catholic guilt on the side. Ted settles in as a regular character, annoying me to no end with his stupid turtlenecks and casual smugness, but he’s barely in the show, so it’s not that irritating. Let me say again that “Collaborators” is not bad, but does not qualify as a top-10 episode of Mad Men. It’s not even a great episode of Mad Men. It’s just an episode of Mad Men with a bad WPA play shoved in. It’s still better than every single episode of Homeland ever made, though, so I suppose that’s an achievement of a sort.