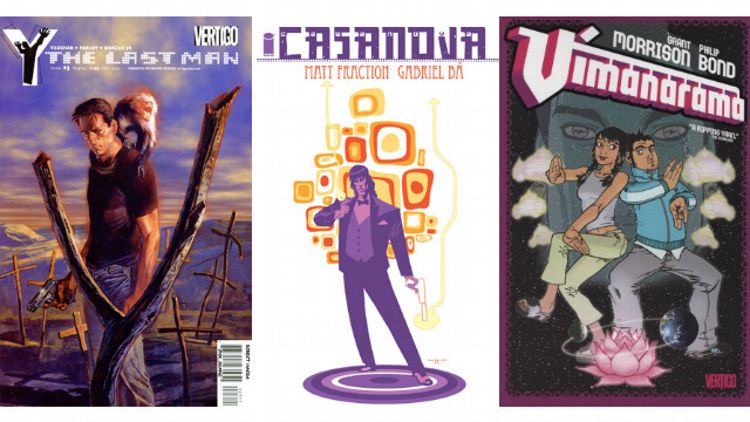 For many years, TV was the leaky life raft for movie stars and directors to avail themselves of when the bloated Titanic of their film careers collided with the iceberg of audience indifference. These days, it’s looking more like an escape in the best sense as the film industry, high on the pricey steroids of superhero blockbusters, has grown inhospitable to everything from character actors to character-based dramas. The latest casualty of Hollywood’s comic-book obsession? Comic books themselves. This week it was announced that Alan Moore and Kevin O’Neill’s literate adventure series The League of Extraordinary Gentlemen — featuring the exploits of Allan Quartermain, Captain Nemo, Mina “Dracula’s chewtoy” Harker, Dr. Jekyll, and the Invisible Man in a steampunk vision of Victorian London — was being developed by Fox as a put pilot. This is promising news for two reasons. One, The League deserved better than the tepid Sean Connery movie that sent its star into early retirement back in 2003; when placed in the right hands, the material is rich enough to support an ongoing series. And two, Fox’s move is a welcome and overdue sign that a thinkier tier of comic properties, gobbled up in the wake of Spider-Man’s success, might finally fall out of the hands of uninterested, rights-hoarding film studios and into the more creative arms of television networks where they belong.

I wrote about the struggles of caped crusaders on TV back in May, arguing that there’s a whole world of non-mutant-based stories out there ready for the retelling. I even made a few suggestions about some CGI-lite titles that deserved a shot, like Marvel’s Damage Control as a companion for S.H.I.E.L.D. on ABC and Paul Chadwick’s Concrete as a heavy half-hour on HBO. Here are a few more off-the-cuff suggestions of off-the-beaten-path comics that could flourish on the small screen. Feel free to throw out a few ideas of your own in the comments. It’s summer and the junior executives who aren’t detoxing in Ojai could use all the free ideas they can get.

(Note: I’ve left off seemingly slam-dunk projects that have already foundered, like Marvel’s Alias on ABC and Powers on FX.)

Writer Brian K. Vaughan has had continued success in comics (his Runaways is the best original idea Marvel’s had since the ’60s; Saga is currently getting raves) and on TV (he’s the main writer on CBS’s summer hit Under the Dome), but his most popular work remains this maxi-series about a doofy young magician named Yorick who somehow survives a global plague that wipes out every other man alive. And with good reason: It’s a stirring postapocalyptic adventure story not afraid to tackle tough issues of gender, responsibility, and monkey-tolerance. People have been trying to adapt Y as a movie for years (for a while it was set up with Shia LaBeouf starring and DJ Caruso directing) and, apparently, they’re still at it. This is a mistake.

The Pitch: A story this epic — and thought-provoking — demands the expanded canvas of television. It’d be a perfect fit for Showtime, which, in its efforts to dethrone HBO, has been pursuing a strongly female-fronted slate. And while the network has made a huge splash with Homeland (and a smaller ripple with Ray Donovan), it still lacks its Game of Thrones or The Walking Dead, the killer genre app that makes up in viewers and Entertainment Weekly covers what it lacks in Emmys. With the right lead and the right monkey (hey, I think Crystal is available!), Y could be a huge win for a risk-taking network and an eager, impatient fan base.

Grant Morrison’s brain, even while sleeping, could power the Hadron Collider. His comic books, whether original creations like Seaguy and The Invisibles or franchise work on X-Men and Batman, are so packed with ideas it’s a wonder there’s any room for thought balloons. This makes an adaptation particularly tricky — unlike most comic writers, he’s not auditioning for movies in his scripts, he’s trying to make movies look small in comparison. But I think there’s potential in this overlooked three-issue collaboration with ace artist Philip Bond. It’s the story of Ali, a mild-mannered Pakistani twentysomething living in a tidy corner of the U.K. where he helps his father run a chain of corner stores. But all naraka breaks loose when, on the day Ali is to meet his arranged bride, a strange crate of Turkish delights opens a portal to a Day-Glo multiverse and all the deities and wonders of Islamic and Hindu myth come pouring out.

The Pitch: BBC America has been making waves with its smart and progressive sci-fi and fantasy offerings, from Doctor Who to Orphan Black. This would be a pricey miniseries, but one that could draw attention for its respectful portrayal of both multicultural England and a conquering race of Indian space gods. In other words: win-win.

Writer/artist Chynna Clugston has described her Britpop-spiked ’90s high school epic as “Archie on crack.” I’d go one further: It’s The Breakfast Club sorted for e’s and whizz. Set in a San Diego high school back in dinosaur times, when people had to call each other on land lines and buy CDs in stores, it’s a sweet and bawdy exploration of all the teenage stuff you’ve spent decades remembering to try to forget.

La Perdida — “the lost girl” — is Jessica Abel’s immaculately imagined story of Carla, a young Mexican American woman who seeks to reclaim her heritage the way one reclaims an apple from a barrel of water on Halloween: messily and with teeth. By moving to Mexico City on a whim and immersing herself in what she desperately wants to believe is the “real” Mexico, Carla sets herself up for disillusionment and despair, but Abel takes great pains never to mute the spirit and allure of a great city that, like all major metropolises, contains a million possibilities and mistakes on every corner.

The Pitch: With its first original series, Rectify, Sundance Channel established itself as a home for considered, adult entertainment, the sorts of stories that would have filled art-house cinemas a decade ago, back when art-house cinemas still existed in numbers large enough to be filled. (Rectify, for example, started life as a film script.) While FX’s new The Bridge pays crucial attention to the woes of immigration and the drug war, there’s plenty of room on the dial for stories about everyday Mexico, the side tourists are afraid to seek out and the side Carla is desperate to discover. In keeping with Sundance’s mission, La Perdida, the series, could do what movies no longer even attempt: transport the audience out of its comfort zone in a way that doesn’t involve exploding a city or blasting off into outer space.

Scotsman Eddie Campbell is the gentleman-scholar of the independent comics scene, and his early autobiographical work is required reading for anyone still unsure whether boozy memories and an inkwell can produce non self-indulgent art. The stories collected here, originally published between 1981 and 1987, follow the sudsy exploits of Alec, Campbell’s avatar, as he falls in and out of love with friends, women, and life itself while whiling away the hours in an undistinguished pub. According to comic scribe Warren Ellis, League of Extraordinary Gentlemen creator Alan Moore once called Alec “what would happen if Jack Kerouac and Neal Cassady had gotten a Ford Transit and pissed off to Southend Pier for a day.” I’d save my comparisons and just call them some of the best comics ever published.

The Pitch: PBS has a nice thing going with the backwards-looking Downton Abbey. How about they fast-forward their nostalgic naval-gazing by commissioning a series based on The King Canute Crowd? It’s got humor, pathos, sex, and — to have the usual Masterpiece viewers reaching for their Life Alerts — drunk people pissing in handbags. It’s basically what Ricky Gervais and Stephen Merchant were attempting with their flaccid Cemetery Junction. Why not hand this over to Doctor Who and Sherlock mastermind Steven Moffat and see if he can come up with something better? There’s a literary, lived-in quality to these humble stories that could make for richly rewarding television, both for the viewers and, presumably, the affiliate pledge drives.

Gabrielle Bell is a gifted cartoonist living in Brooklyn who makes excruciatingly revealing comics based on her continuing battles with personal supervillains like shyness, bad boyfriends (including director Michel Gondry), and yoga. Taken in small doses, these vignettes can seem almost too revealing, like flipping through a diary or gaining permanent access to an exhibitionist’s Snapchat account. But when read in bulk, Bell’s stories create a hypnotic vision of a talented young woman perpetually flailing upward.

The Pitch: With Portlandia and Maron, IFC seems to be cornering the market on comedy that deemphasizes actual LOLs. If paired with a similarly introspective young female filmmaker (Amy Seimetz?), Lucky could be the network’s version of Girls, only gentler, tougher, funnier, weirder, and — this is probably key — cheaper.

Writer Matt Fraction’s sumptuous collaboration with Brazilian brother-artists Gabriél Bá and Fábio Moon is just your ordinary, run of the mill, Thomas Pynchon–referencing spy story about a louche espionage artist who jumps through time (and genders) in an effort to either fight, or save his family from, assorted super-geniuses, space robots, and sex islands.

The Pitch: Since this is basically Archer relocated to one of Stefon’s best nightclubs (and soaked in some of his finest bath salts), why not be like Casanova himself and embrace the duality? This would make for an excellent animated pairing with FX’s hit secret agent satire. Pairing Casanova with Archer would not only make for a killer hour of weird cartoons, it would also open up a new lane for the ascendant network (or, perhaps, its newer, hipper sibling, FXX) as the place Adult Swim viewers drift once they’re ready for some truly grown-up shenanigans.