The First ‘Deadpool’ Trailer Has Arrived, So Let’s Learn About Marvel’s Ultra-Violent Wiseass 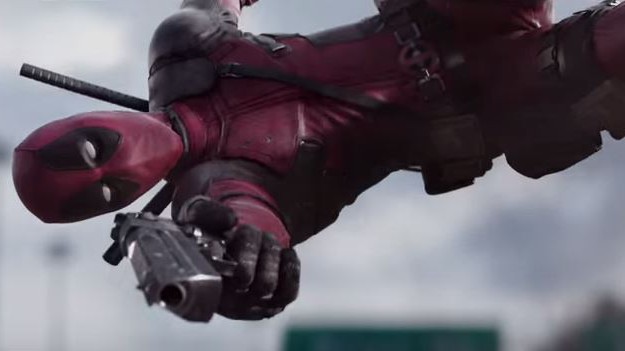 After the release of 2009’s turgid X-Men Origins: Wolverine,1 the news that Fox was looking to spin off Ryan Reynolds’s Wade Wilson character, better known to comics fans as Deadpool, into his own movie/possible franchise was received with confusion. Owing to the character’s verbose, wiseass nature, Deadpool’s comics sobriquet is “the merc with the mouth.” X-Men Origins, among its numerous other sins against entertainment, fails miserably as a platform to launch a Deadpool series mainly because of, but in no way limited to, the fact that by the end of the movie Wade Wilson ain’t got no mouth.

In 2011, Reynolds’s poorly received DC Comics vehicle Green Lantern dimmed the prospects of a Deadpool movie even further. And let us not even speak of the abomination that is known as R.I.P.D.

All of which is to say that — even accounting for this comic-book-movie-crazy era we find ourselves in — it’s kind of shocking that Deadpool actually got made, that it got made starring Ryan Reynolds, and that, judging by the newly released red-band trailer, which features Wade Wilson with a fully operational mouth, it is possibly a fun movie. If your thing is Deadpool, that is. [Warning: NSFW.] 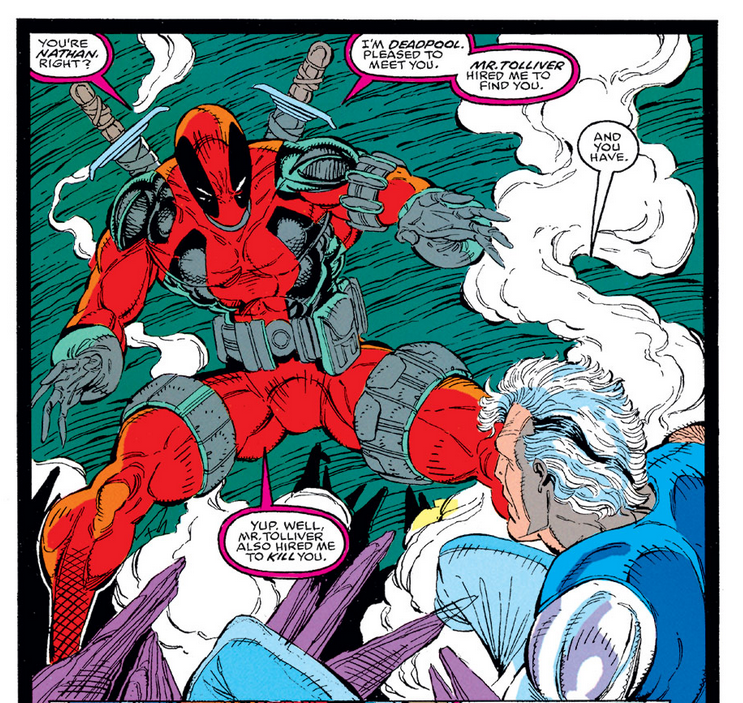 Created by 1990s comics icon/bete noire Rob Liefeld, with an assist from Fabian Nicieza, Deadpool first arrived on the scene as a scumbag anti-hero. A fast-talking, jerk assassin with a cool costume (allegedly a rip-off of DC Comics character Deathstroke), super-reflexes, and a healing factor, he came kitted out with two katanas, various pistols, and a multitude of Liefeld’s signature utility pouches. Deadpool’s form-before-function, hyper-bro style was everything that was exciting about comics in the 1990s — and, simultaneously, a harbinger of their eventual crash. He was fun to look at and he made stuff blow up real good, and that was enough, but it eventually began to seem as if the character was as empty as those numerous mystery pouches ringing his torso, legs, biceps, and forearms.

It wasn’t until 1997, with the launch of the first Deadpool ongoing series (written by Joe Kelly with art by Ed McGuinness), that the modern Merc with the Mouth style was born. Kelly’s Deadpool was more playful, less an asshole than a probably mentally ill loose cannon. His volubility became more entertaining, but also somehow sadder, a cry for help masquerading as several layers of snark. Kelly and McGuinness gleefully played with the form; Deadpool broke the fourth wall, took digs at genre tropes while at the same time reveling in them, and made copious references to the hot pop culture topics of the day. All the while maintaining the punching, katana-slashing and John-Woo-on-cocaine shoot-em-up ethos befitting the character’s assassin-for-hire origins. Hey, remember Speed? Deadpool does. 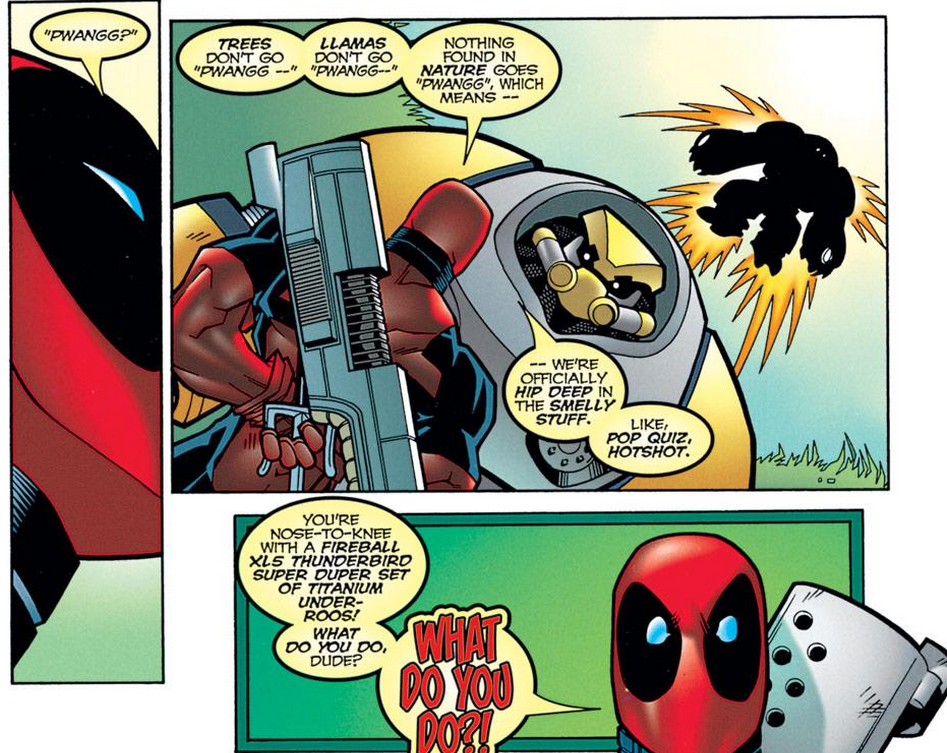 This is the Deadpool comics fans know. He’s Marvel’s court jester, the red-and-black embodiment of comic relief with a healthy dose of ass-kicking thrown in. Accordingly, his healing factor — the product of a top-secret process that cured him of terminal cancer but also scarred his body — makes him essentially immortal, but has also increasingly been played for kicks over the years. During the mutant-centric Messiah War crossover, he spent 800 years on a dystopian Earth locked in a refrigerator because of a time-travel mix-up. He passed the days by playing against himself in various games until the other him started beating him at which time he became the other guy. Maybe.

That’s the kind of thing that happens to Deadpool. Like Tom Cruise in Edge of Tomorrow, part of what makes the character appealing is you get to see him get punished over and over and over again. 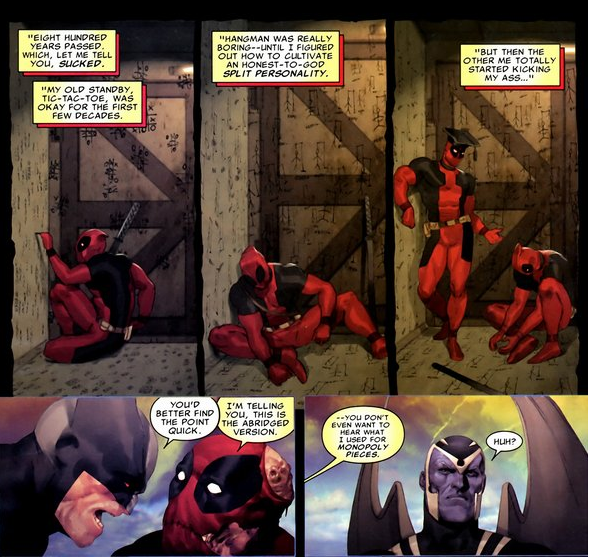 If the trailer is any indication, Deadpool nails the essential merc-with-the-mouth aesthetic, right down to the carefully dated pop culture references (the inclusion of Salt-N-Pepa’s 1993 hit “Shoop” was an inspired touch) and Wade’s mock-surprised/self-deprecating reaction to having a hole blown in his arm.

Deadpool also appears to be the first non-Marvel Studios comics movie to fully embrace that studio’s comedic style. Which, to be fair, is totally appropriate; it’s the only way to get the character right.

Deadpool might not be for everyone (though I’m sure Fox hopes it is), but that’s kind of the point. So, pop quiz, hot shot. Do you like licorice?