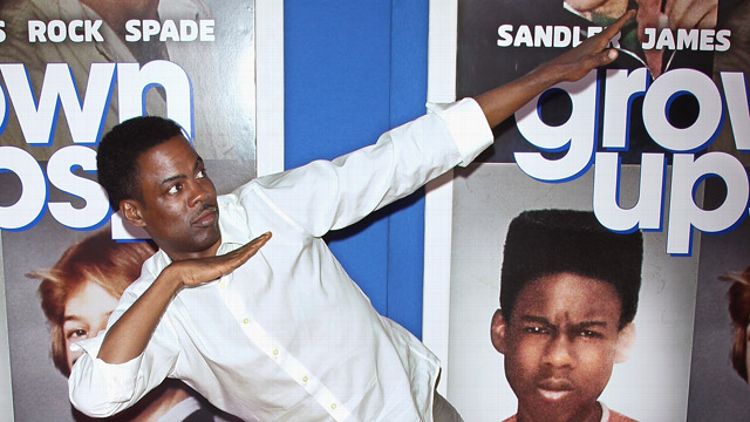 In February, after popping up unannounced at New York’s Comedy Cellar, Chris Rock and Dave Chappelle talked about touring together. And it wasn’t just a “Hey, wouldn’t that be crazy” kind of giddy late-night chatter. They where hammering out dates and everything! At the time, the Comic’s Comic reported the conversation:

“You should come down to West Palm,” Rock replied.

Chappelle: “After next Tuesday, I’m free for like 11 years.”

Rock said he has a new movie of his own he’s going to film later this spring, and would be cutting it over the summer. “I’ve got time between now and the movie,” Rock told Chappelle onstage. “By Halloween, I could do dates.”

After that, Chappelle officially broke his unofficial semi-hermitness by announcing live dates: As you may have heard, he’ll be headlining Funny or Die’s Oddball Comedy & Curiosity Festival alongside Flight of the Conchords. An actual, real-deal tour? Like, one we could buy tickets to? After seven years of nothing more than random, unannounced club appearances, what more could we ask for? Well, maybe we could ask for that Rock-Chappelle team-up to happen after all.

As Splitsider points out, on yesterday’s edition of Aisha Tyler’s podcast (oh yeah, by the way: Aisha Tyler has a podcast), Chris let it be known that he’s doing dates, and that he might do them with a friend: “The tour will happen. Maybe with Chappelle, maybe not. Who knows? We’ve been talking.” Cue screeches of anticipation and impromptu bouts of street-based dancing. We’re still a long way from this actually happening, but, with Dave back doing his own dates, there doesn’t seem to be a particular reason for it not to. Then again: Chappelle’s been out of the “giving the people what they want” business for a while now. Just to be safe, though, I’ll start brainstorming ideas for the tour’s name now: Chappelle Rock City? Watch the ChapRock? Dave and Chris’s Slaptime Fun Hour?