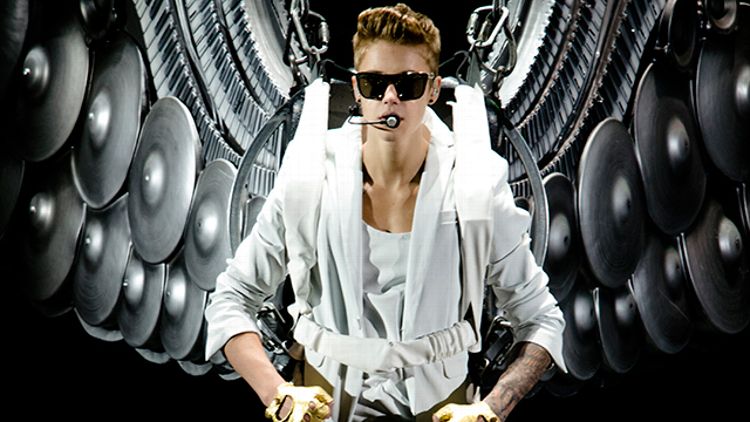 We are in the middle of an “angry summer,” but on the Internet, we are always in the middle of one angry season or another. Cranky winters and salty springs. U mad? U R. A media event occurs. It is infuriating. People sit down at their laptops, and suddenly it’s 12 Angry Men, but nobody has tickets to a baseball game that they’ve really got to get to. There is all the time in the world, and there are many comfortable chairs available. This rage isn’t limited to the predictable commenter “Gotcha” quibbles, because sometimes steam comes out of your ears in an 800-word-thick fog. Here’s a sample of what gave the masses hypertension in the past month.

1. TWO AND A HALF MEN IS REPLACING ANGUS T. JONES WITH A SEXY LESBIAN!

This show has been steeping in a hot tea of disagreement, what with Charlie Sheen and Satan hanging out on set. Now that Charlie’s “21-year-old illegitimate daughter” is potentially entering the scene as a “sexy and gorgeous” womanizer, it seems like a good time to kick the old two-and-a-half-headed dead monster all over again. The L.A. Times predicted this change would provide “a rich new source of lesbian jokes,” while a commenter compared it to “A Rose for Emily.” I assume that’s bad. Entertainment Weekly‘s commenters took more issue with the implications of a lesbian as a “half-man.”

Unhappy with the perversion of “a solid icon of American history on TV, delighting child and adult alike,” Movieguide was firmly bummed out by The Lone Ranger. The only thing they found redeeming about it was Silver (the horse) and the musical score. Greed and “baser passions,” plus pesky political correctness with regard to “evil white men” and the fact that the movie was not shot in “the great state of Texas” did not a fun-filled powwow make. This is all, of course, the second round of controversy for Tonto, which began when the movie was still in production. The Toronto Star compared Armie Hammer’s Lone Ranger to “Jimmy Stewart with a lobotomy” and called the film out for cribbing from Planet Terror. Doesn’t everything crib from Planet Terror? Everything should.

India-Jewel Jackson took to XOJane to air her discontent about Paula Deen’s apology after trading Facebook posts about it with her friends. As is often the case with entering words into Facebook boxes, she probably wished she hadn’t, because after comparing slavery to the Holocaust in the article’s comments thread, the conversation quickly derailed into a very heated exchange that was boxed up and sealed after 421 caps-spattered word bombs (and one mention of “Meryl fucking Streep”) and deep-Wikis into Nuremberg territory. Better be calm. Channel this into your art.

4. WHETHER OR NOT TO SEE ENDER’S GAME!

Orson Scott Card is a Mormon and not a fan of same-sex marriage. This has been long-documented, but with the upcoming release of Ender’s Game, there is finally a new debate to be had: Whether or not a product should be made unpalatable and unprofitable by its author’s personal beliefs. Geeks OUT, an organization devoted to the LGBT presence in geek culture, called for a boycott of Ender’s Game to protest Card’s “fear-mongering and religious bullying.” Card himself issued a sort of passive-aggressive but temperate response, which Geeks OUT wasn’t buying. By this point, the argument had gone beyond Card’s NOM funding and bled out into the vast sea of the moral accountability of media figures; Tyler Coates over at Flavorwire called the boycott “a silly and childish reaction.” That was not the end of it, of course, because Geeks OUT wrote a term paper on how wrong Coates was: He failed at covering topics like “Kristeva-ian intertextuality, concepts of homage, parody, pastiche, Lyotardian notions of the death of the meta-narrative, Hebdige’s critique of sub-culture, or Barthesian ideas of the image repertoire” in his post. So u not only mad, now u post-structuralist, too.

5. THE RETURN OF THE NEWSROOM!

Aaron Sorkin has been making people mad for ages, including, probably, that staff of writers he fired last year. It seems as though the embers are still smoldering, because a preview of the first four episodes of Season 2 made an Entertainment Weekly reviewer want to tear out all of his hair. Variety panned the preview as “too smart to be dismissed, but so abrasive as to feel like Media Lectures for Dummies,” while I Hate The Newsroom (dot com) recently updated its blog with a screenshot from an anti–Will McAvoy website in the upcoming season’s trailer — ah, so the site plans to continue to hate-watch. Excellent. IHTN likes to put Sorkin on “misogyny watch” and dissect every scene, scouting for errors, missteps, and offenses.

Willow Smith’s “Summer Fling” video made commenters wary, creeped out at the idea of a 12-year-old drinking “cold drinks” (NO!) and schnookling with a more mature-looking love interest. Then there’s Bobbi Kristina Brown, engaged to her pseudo-brother, and despite that being totally her prerogative, her fan base was both disheartened and protective (and by the way, adds a commenter to BKB, “if you get a nose job, I will never say a nice thing about you again … Lose the perm”) when the news broke. We’ve sent a handful of mothers to timeout as well: Katie Hopkins, British Apprentice star, ignited tempers by calling redheaded children “just so much harder to love” despite having two gingerish children of her own, while Kate Gosselin caught flak for an image in which she pulled her eyelids taut and wore a geisha wig. Oh, and let’s not forget Michelle Duggar’s “baby holocaust” statement, because that was a pretty big oopsie, called out by the Jewish Journal and in the comments of other faith-based blogs alike for being all sorts of dumb.

7. THE FALL OF JUSTIN BIEBER!

Saving our pity and empathy for someone who deserves it like Amanda Bynes, all we have left for Justin Bieber is fury. Regarding the mop-bucket tinkle incident, Anthony Bourdain suggested that the befouled restaurant’s chef “should have put his foot up this young punk’s ass” and tweeted plans to tell his daughter that Biebs tortures puppies in an effort to divert her attention from his potent beauty. TMZ foams at the mouth to report on Bieb-ire, gathering Internet slams from Blackhawks fans who were mad because Bieber trod on their team’s logo while taking pictures of the Stanley Cup (we forgave Lil Wayne when he stepped on the American flag, but that’s because he’s Weezy). He shows no care for the lives of paparazzi and his photo shoot rules paint him as a “paranoid, self-absorbed megalomaniac.” His neighbors hate him. Even Paris Jackson hates him. Crushable recently crowned him “officially the worst.”

Is it possible that something can be “rapey” and ear-wormily appealing? Yes, and that dichotomy pisses. You. Off. You’d think we could have closed the book on Thicke’s sexually aggressive lyrics after the Daily Beast covered the story, but you would be wrong. Slate issued a rebuttal, defending it after “a few hundred” listens (hey hey hey) as being about “fun, consensual, kinky sex,” and Thicke took umbrage at the Beast’s allegations, calling them “ridiculous.” Vice doesn’t enjoy the music video’s naked man ankles, and Thicke’s continued bragging about the size of his cock has prompted cries for penis receipts to prove it.

Zebra-print koozies and 9/11. A surfer’s ass in a Roxy ad. Sean Parker’s wedding, the backlash to which he called a “new low” for media. The “Angry Trayvon” app. An Oxygen show about pastors. Bruce Lee being resurrected for a whiskey ad. The Big Brother train wreck. Devious Maids, of course. A possessed printer (“Don’t be fooled. This thing is evil incarnate”). V/H/S 2, even just part of it, and the gall of a movie reviewer to write about a movie he hadn’t finished. Sharon Osbourne flirting with the royal family. Serena Williams shading rape victims. And, finally, the vomit button. Type it out. It’s OK. It’s the new primal scream therapy, and it’s much more considerate of your neighbors.

Filed Under: Justin Bieber, Robin Thicke, The Newsroom, Two and a Half Men