Y’all of Fame: Nashville Is the Fall’s Best New Drama 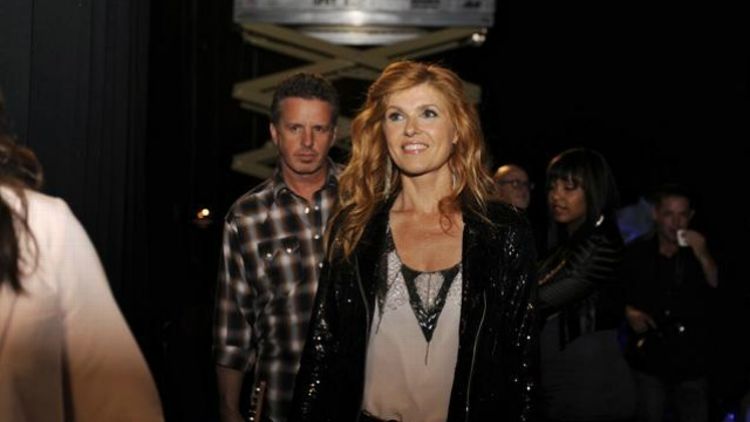 All great artists have their signature tools. For Picasso it was the paintbrush. For E.L. James, it’s the riding crop. And for Connie Britton, it’s “y’all.” Without it, the Boston-born Britton is a fine actress, plain-spoken and sharp. But when handed the simple syllable, she is transformed: Her voice softens even as her face toughens, her luminous eyes go wide, caught crinkling somewhere between wonder and bemusement. As Tami Taylor on Friday Night Lights — perennially patient wife to Kyle Chandler’s Coach and adoptive mother to everyone in West Texas — Britton was a revelation: sweet as tea and stronger than a linebacker; a dab of butter on a mountain of grit. For many actors, the demands of an unfamiliar accent can be restrictive as a latex bodysuit, but Britton comes alive the further South she travels. Before she could run, she had to learn to drawl.

Nashville, premiering tonight at 10 p.m. EST on ABC, is many things, the fall’s best new drama among them. But most of all it’s a big, glittery showcase for Britton’s supersize charms. As Rayna James, the graying queen of country music — think Faith Over The Hill — Britton is radiant, even as her character’s star is dimming. When we meet her, Rayna’s chasing hits as frantically as she chases her kids around the stately Music City she shares with Teddy, her Great Recession–scarred second choice of a husband. “We’re cash-poor,” he explains as Rayna heads off to work, bringing down the house at the Grand Ole Opry in order to save her own. But the real threat is lurking backstage: Auto-Tuned ingenue Juliette Barnes is Taylor Swift without even a shred of false modesty, gobbling up acclaim along with every able-bodied man in town.

As Juliette, Hayden Panettiere is deliciously bitchy — meeting Rayna for the first time, she twists the knife with a story about hearing the older star’s songs in utero (“Bless your heart, that is a charming story,” Britton purrs back, hackles up) — but her appetite stems from a darker place: a junkie mom in constant need of money. Panettiere does good work conveying Juliette as she is between the standing ovations: an emotional black hole, despite the best efforts of every cowpoke in Tennessee. Still, Nashville, at least for now, makes no bones about whose side we’re on. The plot is set in motion when Rayna is asked to open — excuse me, “co-headline” — for her mini-me on a national tour. But as Rayna herself puts it: “I’m not ready to hang up my rhinestones just yet.”

Tonight’s pilot is a marvel of world-building and stakes-setting. Written by veteran screenwriter Callie Khouri (Thelma & Louise) and ably directed by R.J. Cutler (The War Room), Nashville instantly acclimates even the most tone-deaf viewer into the hothouse of Music City, from the snakeskin-booted slicksters prowling the Opry with dollar signs in their eyes to the aspiring balladeers trapped busing tables at the Bluebird. Perhaps due to Cutler’s background in documentaries, a lot of time is well spent on the little things: His camera captures the workmanlike drudgery behind every transcendent moment (Rayna’s off-key tour rehearsals; the casual treachery of a label boss trying to fiddle with success while the record industry burns around him) as well as the first quiet sparks of Sam Palladio and Clare Bowen’s flirtatious collaboration; a duet that could eventually go global. And thanks to T-Bone Burnett, Khouri’s husband and award-winning authenticity generator, Nashville even gets the music right, something notoriously hard to do for anything scripted. All of the original songs here, from the Britton-belted crowd-pleasers to the more intimate picking of Charles Esten as Rayna’s bandleader and lost love, are better than accurate: They’re actually good.

Less melodious is a political plot that pits Powers Boothe, as Rayna’s lizardy papa (“He’s always there when he needs you”), and her spotlight-starved husband against the engaging Robert Wisdom (Bunny Colvin from The Wire) in a race for the mayor’s office. Still, any opportunity to see Boothe snarl over soup is one worth taking. At 64, Boothe is hammier than the deli case at the Piggly Wiggly, but his shake-and-bake Shakespeare act adds a soapy gravitas to the show — and brings out the frayed vulnerability in Britton’s measured performance. It’s also a reminder that what separates Nashville from the rest of this season’s freshmen isn’t that it reinvents the wheel; other than a potential downtown baseball stadium, no new ground is broken here, and many of the future entanglements are as honkingly inevitable as a chorus. Rather, it’s a celebration of what made network TV worth watching in the first place: appealing and attractive characters let loose on a rich game board stacked with doomy romance, backstabbing glamour, and the occasional dash of artistry.

It’s legitimate to ask if executive producers Khouri and Cutler are capable of maintaining such harmony. There’s a long history of TV outsiders bringing a fresh perspective to the small screen and a very short list of those able to adjust to the weekly grind. After the pilot, a new showrunner (Boss’s Dee Johnson) was flown in and no additional episodes have been screened for critics. It could be a bad omen or it could be nothing at all — no amount of off-camera drama can take away from the music being made in front of it.

Back below the Mason-Dixon line where she belongs, Connie Britton is proving yet again that she’s one of the best actors on television, cable or otherwise; even without Friday Night Lights’s notoriously loose shooting style, she’s able to make every moment impossibly intimate, whether she’s facing a packed house or an unforgiving makeup mirror. Britton has the rare ability to make innate decency seem compelling, not story-deadening, and Rayna’s supposedly advancing years hang on her like a platinum plaque. When her brooding bandleader asks a simple question (“What would you change?”) while standing astride the Shelby Street Bridge, she manages to sell an entire character with two contradictory words: “Nothing,” she says. “Everything.”

Never mind what the plot tells us: This is her headlining gig. And she’s making the most of every second of it.