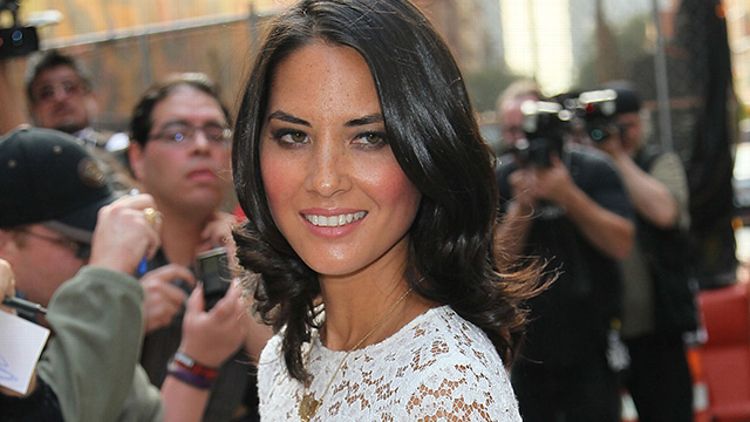 I have a confession to make: I’m a Munnhead. That’s an Olivia Munn fan, for you non-Munnheads (and future Munnheads). Therefore I was very excited to hear about the casting of Olivia Munn as a new love interest for Jake Johnson’s character Nick for an arc on the sophomore season of New Girl. How did Munn turn her reputation around from a “women in comedy” lightning rod to an actual bona fide woman in comedy? By proving she can take a joke.

Munn was an army brat raised in Oklahoma City and Tokyo, where she modeled as a teen. She majored in journalism and minored in theater and Japanese at the University of Oklahoma, then moved to Los Angeles to pursue a career and became a sideline reporter at Fox Sports Net. This might seem like the perfect job for Munn, but she felt alienated and looked stiff on camera. She has said, “I was trying to be something I wasn’t, and that made me really uncomfortable on live TV.”

As an actress she found herself at the bottom of the pool with the rest of L.A.’s ravenous would-be celebrities. She worked as a video girl for Zebrahead and acted in Z-grade straight-to-video horror movie Scarecrow Gone Wild, where she got last billing playing a character named “Girl #1.” Munn’s pinup girl good looks came courtesy of her Chinese mother and German-Irish father. She embodied that all-American cliché, the striving Midwestern girl who comes out to L.A. looking for her name in lights.

There is a tendency to believe that beautiful people always get what they want and rarely experience suffering, or that their emotional pain is less valid somehow. It might be comforting to believe that they are all vapid. This is how Nikki Finke got her misguided belief that hot women can’t be funny. But attractive women are humiliated all the time, particularly in Hollywood. To withstand all that humiliation and maintain the belief that you might still succeed, it’s very useful to have a good sense of humor, coupled with a little delusional narcissism.

Munn’s rise to fame was far from rapid. She spent two seasons as a teen surfer on TeenNick’s (then called The N Network) Beyond the Break, a show sandwiched between Degrassi reruns, and appeared in a movie called The Road to Canyon Lake as “Asian Mob Girl” under her real name, Lisa Munn. But then, in 2006, she got a gig co-hosting G4’s geek news program Attack of the Show! The network was initially not sure they wanted to hire Munn, since she admitted she knew very little about video games, but her charisma prevailed.

On Attack of the Show! Munn capably related the latest in video games and Internet trends. She also did some segments in sexy cosplay outfits and deep-throated the occasional hot dog on camera. If Attack of the Show! was basically a web show on TV, then she followed the most basic tenet of the web: anything for hits. Shortly after Munn was hired for an ultimately brief stint as a correspondent on The Daily Show, the website Jezebel wondered if her “geek goddess schtick” would play to a broader audience and connect with female viewers.

2012 has been Munn’s breakout year. Playing Sloan Sabbith on The Newsroom and Channing Tatum’s fuck-buddy in Magic Mike, Munn has shown that she is an actress who excels at playing outwardly tough but secretly vulnerable. The turnaround in Munn’s image from “Maxim girl” to “Maxim girl that girls want to have a drink with, too” began somewhere around the time she admitted to sleeping with Brett Ratner in her autobiography, and claimed that he masturbated while eating a shrimp cocktail. Rather than issuing a denial, Ratner responded with a weird macho racist admission, just in case you had any guilt about someone so publicly invading the sexual privacy of Brett Ratner. Then some extremely intimately annotated nudes from her relationship with Chris Pine surfaced online, which, unexpectedly, only served to further humanize her sexy content-bot image.

New Girl, Munn’s next big comedy-cred move, successfully liberated Zooey Deschanel from her cinematic Manic Pixie Dream Girl prison by proving that she does indeed have a (great) sense of humor about herself, and a previously mostly unseen natural gift for physical comedy. It has become the venue of choice for hip guest shots from underutilized comedic actresses like Katie Cassidy, Jeanne Tripplehorn, Lake Bell, and Lizzy Caplan. And Parker Posey kicked off the season premiere as a bonkers shot girl with the perfect amount of backstory, a much-appreciated follow-up to her stunning recent work on Louie.

Munn’s character on New Girl will clearly lose out to the long-term OTP of Nick and Jess, but it will be interesting to see how they play Olivia Munn’s version of a physically hot but fundamentally awkward girl against Zooey Deschanel’s. Last season’s best episode might have been “Jess and Julia,” which pitted Lizzy Caplan’s hard-bitten lawyer Julia against Deschanel’s sunny schoolteacher Jess, pushing both to the edge of their self-definitions. Deschanel mocked her naive hipster princess image while Caplan took shots at her own cynical cool-chick persona. The takeaway was that women can express opposing stylistic preferences and still peacefully coexist.

Conversely, 30 Rock grappled with similar issues on the fifth-season episode “TGS Hates Women” to less happy results. The episode involved a thinly veiled version of another Jezebel post about Munn and The Daily Show‘s “woman problem,” via a fictional pop-culture criticism website called “Joan of Snark.” There was also Abby, a new female hire in the TGS writers’ room whose aggressively childish sexuality and the attention it drew from men made Liz Lemon very uncomfortable. It ends ambivalently, Liz still unsure how to reconcile her natural urge for sexual competition with other women (which in her case manifests as prudery) with supporting the sisterhood.

It seems dubious to take aim at Olivia Munn for arguably exploiting her own appearance in an business that often treats women as disposable decorative objects without criticizing the whole entertainment industry. Munn obviously always aspired to be something more than “Girl #1.” This is not to say that she is not one or two bombs away (The Babymakers?) from the D-list, but that is part of her charm. She worked her way up the chain gradually and by the skin of her teeth, without the benefit of connections or a trust fund. She is an Asian American actress with the opportunity to play leading roles, in a world where an Asian woman has never won an Oscar for Best Actress, nor even been nominated since Anglo-Indian actress Merle Oberon in 1935. You don’t have to like Olivia Munn, but you must respect her hustle and nerve.

Munn has finally found her perfect pseudo-journalist job as Sloan, the financial reporter on The Newsroom — the prototypical Aaron Sorkin heroine whose hotness sometimes leads peers to underestimate her ferocious intelligence. Sloan’s much-praised IQ (she has two Ph.D.s) is all book smarts without any people skills. She’s a savant in meetings and a socially incompetent goofball off the clock. Munn makes her character, who goes from adorkable to cutthroat in the blink of an eye, somehow believable and three-dimensional. While strikingly different from Olivia Munn’s extroverted AOTS persona, Sloan Sabbith still has a lot in common with Olivia Munn: underestimate her at your own risk.