Forget the Goat: A Letter to Cubs Fans 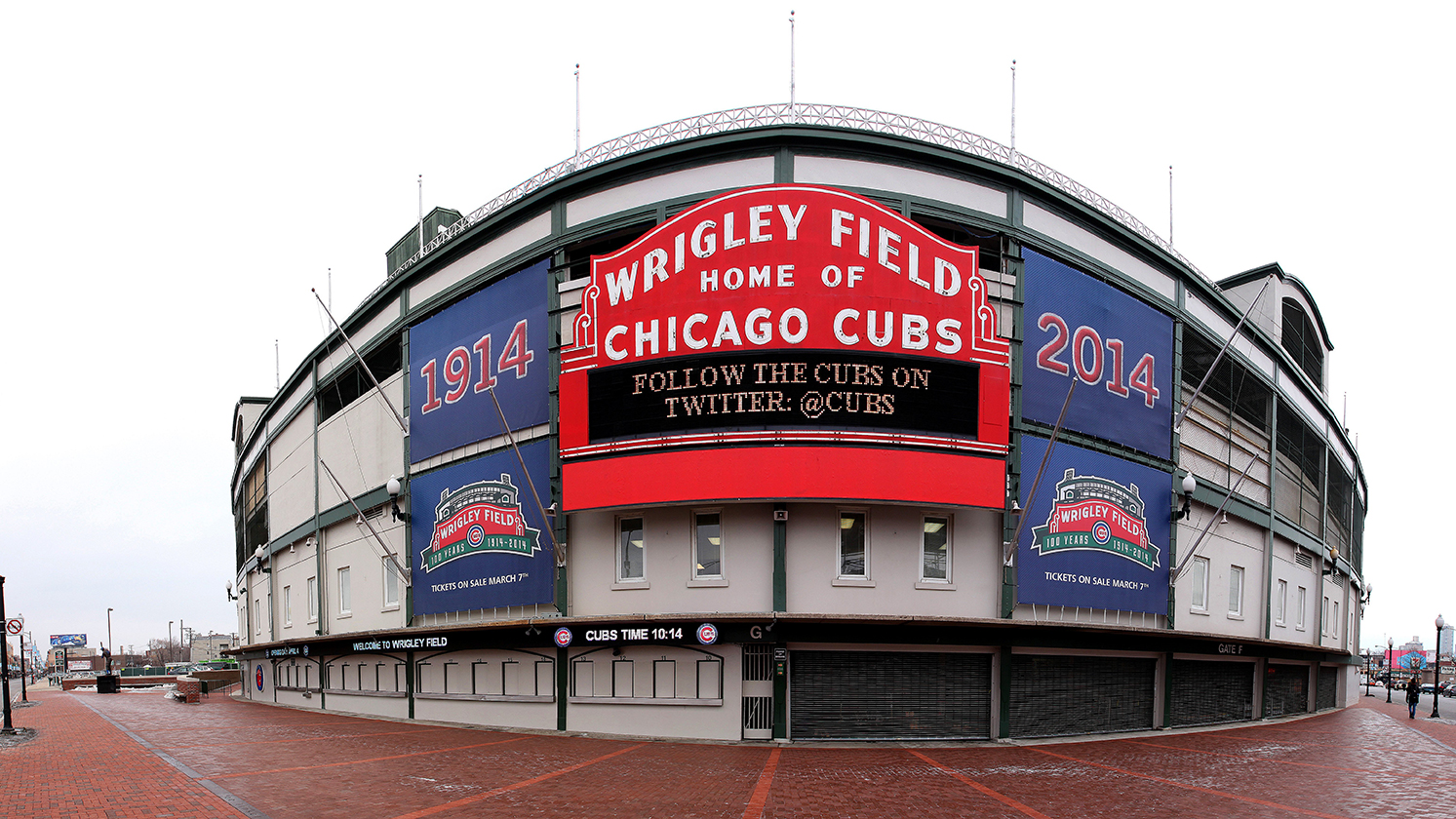 It’s time to discuss this Billy Goat Curse like adults. Let’s no longer let it lurk in the corner of our brains. Let’s discuss it. I am a 36-year-old man. I am not afraid of the dark. I am not afraid of a bogeyman living under my bed. I no longer believe in Santa Claus. I have also accepted the fact that I will never play professional sports, and I’ll never be as good as an actor as Robert De Niro was in The Deer Hunter. It was fun to believe in all of these fantasies, but I have simply outgrown them.

This brings us to the Billy Goat Curse …

Legend has it that a curse was placed on the Chicago Cubs in 1945, preventing them from winning a World Series. Billy Goat Tavern owner Billy Sianis was asked to leave a World Series game against the Detroit Tigers at Wrigley Field, because his goat, which he brought to the game, smelled like a goat, and it was bothering other fans. Now before we go any further, I need to say I agree with Cubs management. If I owned a business and someone brought a goat to that establishment and it was bothering other customers, I, too, would ask them to leave.

To make it even more personal, if someone brought a goat to the New Girl set — say, our sound guy, or our set PA — I can guarantee, with 100 percent certainty, that they would be turned around and asked to leave long before Zooey Deschanel ever caught sight of it.

But back to 1945. After his goat was banned from entering the stadium, Sianis was furious and declared, “The Cubs ain’t gonna win no more.” Was his English great? No. Does it matter? Probably not. On that day — October 7, 1945 — Sianis tied his pet goat to a stake in the parking lot and entered the stadium.

After the game, Sianis dispatched a telegram to team owner Philip K. Wrigley that read, “You are going to lose this World Series and you are never going to win another World Series again. You are never going to win a World Series again because you insulted my goat.” The Cubs lost that series against the Tigers. Sure, they were up two games in a seven-game series, but hell, things happen. It’s baseball. To say the Cubs lost that series because of a disgruntled bar owner seems far-fetched, no? Maybe it was the curse, or maybe it was Hal Newhouser’s pitching. Who am I to say? I am not God. I am just a man.

Cut to 1969. Late in the season, the Cubs had a record of 84-52. Pretty good, right? It was September 2 and they were in first place. To this day, the ’69 Cubs were my father’s favorite team, featuring the likes of Ernie Banks (you might remember him from his cameo in the great Windy City Heat), Ron Santo, Fergie Jenkins, and Billy Williams. The Cubs went on to lose 18 of their last 26 games, while the Mets went 23-7. It was one of the most astounding late-season collapses in history. The Mets won the National League East and would go on to win the World Series. That’s baseball, right? Wrong.

Some people, my father among them, believe that the reason the Cubs lost that year was the Billy Goat Curse. On September 9, 1969, the Cubs played the Mets at Shea Stadium. A big game. At one point, a black cat walked onto the field and approached Santo, who was standing in the on-deck circle. Yes, a black cat. I watch a ton of sports. I have never seen any cat on a baseball field, let alone a black one. But there it was. On the field. 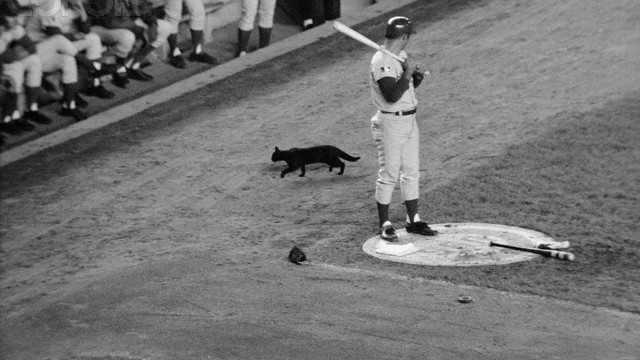 Some say that cat was part of Sianis’s curse. It was there to jinx the Cubs. It worked. The Cubs started losing almost immediately after that damned black cat showed up.

Others believe that the Cubs blew their late-season lead because of more logical reasons. They said the players simply burned out because manager Leo Durocher didn’t believe in resting his best players — kind of like Tom Thibodeau. Either way, the Cubs lost, and their World Series drought continued.

If the ’69 team was my father’s Cubs team, the 2003 team were mine. I was 25 that year. Broke. I had bottomed out of NYC after getting dumped by a long-term girlfriend, and I decided to move in with my father. Quick backstory: My father wasn’t around when I was growing up. He was gone when I was 2 and rarely present until my early twenties. When I decided to move in with him, it was a strange decision. We were not close, but there we were — two Cubs fans, living in his condo in Lincoln Park, preparing for the start of the 2003 season. My father and I watched every game, and through that season grew close.

We were very superstitious. If Kerry Wood was pitching well and I was sitting on the left side of the couch, I didn’t move. If my father was near the fridge and we were rallying, then he stayed by that damn fridge until the half-inning was complete. We both believed, in our hearts, that this was the year the Cubs would finally win a World Series. We got into the playoffs, beat the Atlanta Braves, and went up against the Florida Marlins in the National League Championship Series.

Steve, if you’re reading this, I sincerely apologize, for all Cubs fans and for myself. You see, Steve, I was drunk, in an apartment across the street from Wrigley during Game 6, and I too cursed at you. I opened the window and screamed horrible things at you. I blamed you for losing. This was my magical year. I had rekindled my relationship with my father watching the Cubs, and we were on the verge of winning it all. I thought you took that from me. I was wrong. We were all wrong. You did nothing wrong.

I am getting off track. I am getting emotional. Bottom line is this: The Cubs were five outs away from the World Series. The Cubs lost that game and then lost Game 7. I was in the bleachers for Game 7 with my brother and watched the Marlins storm the field. It broke my heart. I believed the Billy Goat Curse was real.

Now, its 2014. Times have changed. We have new owners, the Ricketts family, who are doing everything they can to win. They hired Theo Epstein, who brought a championship to Boston. They have established an incredible farm system and are attracting big-name free agents. Jon Lester! They are putting together a team that can soon contend for a World Series. It is not guaranteed we will win. This is, after all, baseball. Anything can happen.

This is where this piece becomes a letter to the fans.

Soon, we will be back contending for a World Series in Chicago. The magical summers in Wrigley Field will return. Eventually, sooner rather than later, we will be back in the playoffs. Playoff baseball is tense. The game turns into chess. Everything matters. We need to ready ourselves for those games. We can not be little children scared of a curse. We can not gasp when a player makes an error. I just heard Ryan Dempster say in an interview that players feel the anxiety from the fans, which means we are the curse. Not the players. Not the black cat or the billy goat. We are all Steve Bartman. We are the reason the players get tense. Like an overprotective parent who makes their children nervous, we, as fans, need to relax. We need to have faith that these Cubs, our Cubs, can and will win, if we let them.

Jake Johnson can be seen on Fox’s New Girl on Tuesday nights. His movie, Digging for Fire, which he cowrote with Joe Swanberg, will premiere at Sundance.