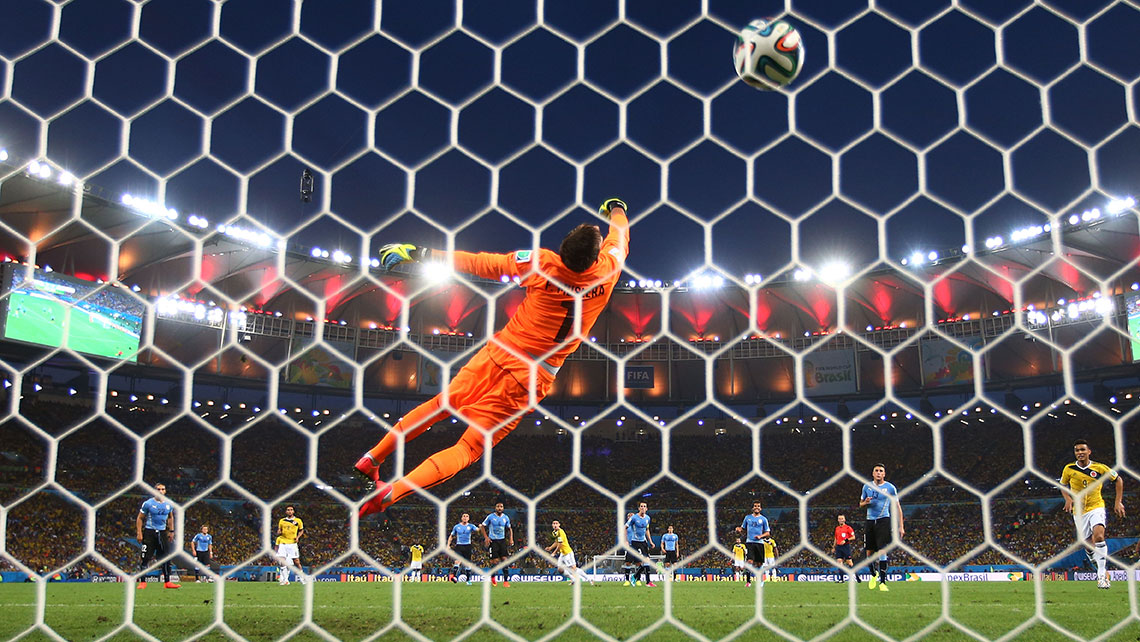 While most of the year-end FIFA awards get decided by uninterested, possibly misinformed national team managers and captains, one remains truly open to the people: the Puskás Award.1 It’s given to the single goal that, as the press release from when the award was first introduced reads, most meets the following criteria:

1. It should be a beautiful goal (subjective — the spread of goals should include long-range shots, team goals, overhead kicks, etc.).

2. The importance of the match should be taken into account (objective — limited to “A” international teams, confederation championships and national top-division club matches: the more important the goal, the better).

3. The goal should not be the result of luck or mistakes by the other team.

4. The goal should support fair play, i.e. the player should not have behaved badly in the game or have been charged with doping, for example.

All voting is done online, runoff election–style, with a preliminary round of voting that initially narrowed down the field from 10 to three. The winner will be announced January 12. Since this is the only FIFA thing remotely close to orbiting the word “democratic” — until we inevitably find out that some Tajiki dove-feather baron influences each year’s results, but let’s play along for now — this opportunity must be considered with the utmost gravity. And considering the stakes — we’re ranking beauty, and look how that went for your boy Tiresias — we’ve tried to contextualize these goals from every necessary angle. So, study up and then go make the most important decision of your life.

Game: Colombia against Uruguay in the World Cup

What Happened: The brilliance of this goal doesn’t come from the how; it’s all in the what. As in, what … the fuck? Did he really just try that in a World Cup quarterfinal? The goal itself — that quick look over the shoulder, the chest control, the choppy steps to propel the quick half-turn, the outside-the-foot volley — is technically perfect, but it’s made of stuff a lot of guys can do, but so few try because most of the time this ends up hitting some dude eating a meat pie in Row 15. The goal’s resonance, more than anything, comes from how it so excellently symbolizes Colombia’s flame emoji–ness in Brazil.

You shouldn’t vote for this goal if … you have ever offered an antiseptic wipe to a stranger on a commercial flight.

You should vote for this goal if … you’ve ever imagined what your face would look like on a one-dollar bill.

Game: The Netherlands against Spain in the World Cup

What Happened: That ball, man. I still dream about this shit. Most driven long balls either bend or sort of hang in the air — backspin or sidespin corralling some of the power — but this does both. And the effect, considering where it’s coming from and where Van Persie’s approaching from, is that the ball basically stops dropping and sits, briefly suspended above the ground. And what do you do when God tweaks the laws of physics for you? You close your eyes and dive headfirst into the distortion. This is certainly the hardest to pull off of the three — any pro can hit a sweet volley, but not many can make the Willie Mays catch with their goddamn face.

You shouldn’t vote for this goal if … you’ve ever been offended by a paper airplane and/or you self-identify as “anti-dolphin.”

You should vote for this goal if … you don’t mind if George Saunders never writes a novel.

What happened: The ball in isn’t all that great, and there’s a ton of spin on it, so her first touch has to kill all of its on-axis motion. Within less than a second, she then has to situate herself on the field, hold off a defender, flip the ball over her head and away from the goal before it hits the ground, reorient herself in relation to the ball, which is now above her head, pivot 180 degrees, and catch the ball perpendicular to the plane it’s falling on. Oh, and she has to hit it well enough to then beat a keeper from 25 yards away. You could teach a year’s worth of science classes just by breaking down this goal.

You shouldn’t vote for this goal if … you’ve never been in love.

You should vote for this goal if … you believe that life is anything more than just an intermission between birth and death.

Forget the Goat: A Letter to Cubs Fans