Courtesy of the Adler Hip-Hop Archive 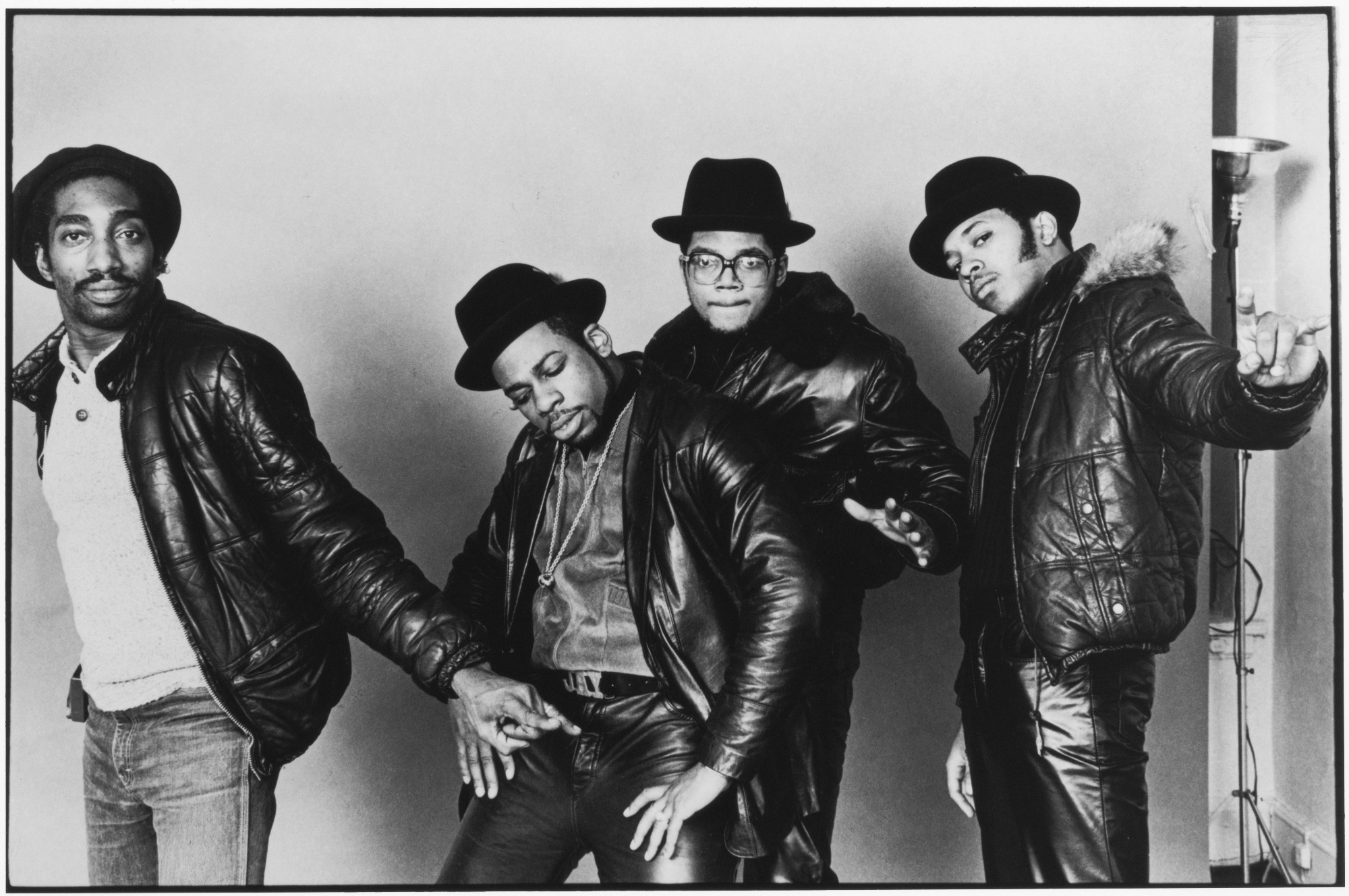 In 1983, Russell Simmons’s RV went airborne off of a dock in Delaware, aiming for a ferry to Jersey, with ambitions of reaching the Bronx. A shortcut. Pause the camper in midflight. Who’s driving? Where’s Russell? The band he manages, Orange Krush, is braced in varying flashes of ulp. There’s Akili Walker, engineer for Prince and George Clinton. And Davy DMX, a guitarist named after a drum machine. There’s Trevor Gale, future vice president of the Society of European Stage Authors. Rakim’s older brother, Ron. Not to mention Kurtis Blow, who recently appeared on Top of the Pops, performing “Christmas Rappin’” in tweed.1 Any one of them could’ve been dozing in the berth above the cab, waking in flight to see a waterborne vessel rather than, say, I-95.2

“You have to watch yourself on the road,” Larry Smith — bass player and band stunt driver — once cautioned. By all accounts, Smith was in a hurry. Orange Krush had just played in Virginia, and he was anxious to make it back to New York in time to catch Grandmaster Flash or whoever at Disco Fever, a club in the South Bronx. Smith always had to get back to the Fever after a gig. (South Carolina? Not a problem.) The plan was to take the ferry across Cape May to Jersey. But as the camper approached, the ferry began pushing off. Smith, always one to improvise, took the rising dock for a ramp and gunned it. You can almost see the arc of “oh shit” sailing out the windows. Maybe Kurtis Blow’s pointing at the floorboard: Those are the brakes! This is dedication.

Larry Smith, rap’s first super-producer, died December 18 at the age of 63. The cause was complications from a series of strokes, with the first occurring in 2007. Smith helped build a hip-hop empire with head-butt minimalism and grown R&B synth textures, crossing over into pop without letting go of his nuts. After a Run-D.M.C. show at the Charlotte Park Center in winter 1984, it never occurred to me that the studio rat packing up the orange turntable cases was responsible for clobbering my brain for the past 30 minutes. (If even; they had only four songs at the time.)

That night after Larry died, Run-D.M.C. performed a Christmas show at the Barclays Center3 and paid tribute to the guy who scared them into becoming stars, all while producing classics like “Sucker M.C.’s” and “Rock Box,” as well as hits for Whodini, Fat Boys, and Kurtis Blow. The 1984 Swatch Watch Fresh Festival — the first national tour to bring rap to my hometown — was basically a Larry Smith mixtape. You can see Run-D.M.C. in the video for Whodini’s “Freaks Come Out at Night,” getting off the tour bus in Baltimore. They’re chanting the hook for “Friends,” the record that Larry Smith’s own friends say made hip-hop grow up. “When we toured with Whodini, Larry was kicking our ass every night with ‘Friends,’” says Darryl “D.M.C.” McDaniels.

Thirty years later, onstage at Barclays, a middle-aged Reverend Run popped his own collar, cussing himself back into the old Run, perhaps channeling the same wrath Larry Smith had exhibited after the group tanked in its New York debut, back when the members wore plaid and D.M.C. lost a prescription lens to the moment. That had been a busy night. After that first show, they still had others at a skate rink in Yonkers and later at the Disco Fever. Again, Smith behind the wheel, Fever-bound, this time in the two-door sky blue DeVille commemorated in “Sucker M.C.’s,”4 yelling over his shoulder at Run while weaving through Manhattan traffic. “He’d call Run a ‘nervous nipple,” D.M.C. says. “He wanted us to make him look good because the Fever was his spot. He carried our cases and everything when we were knuckleheaded goofy kids. He would be cool, but every now and then he’d turn into a grown-up.”

In the front passenger seat was the opening act, Spyder-D, a basketball phenom from Queens who was scheduled to perform his hit “Smerphies Dance,” as heard during Pat Prescott’s morning aerobics workouts on New York radio station WBLS. “Larry was in full Larry mode that night,” says Spyder, a.k.a. Duane Hughes. “‘You better not be wack!’ He scared the hell out of us. He had no problem hurting your feelings. He was like an instant big brother to me, but he was never condescending. It was always ‘I’m older and shut the fuck up and listen’–type shit.”

Spyder met Larry Smith through his high school friend Russell Simmons. Simmons had given him Larry’s number at Bonds Casino while advising Spyder against wearing a rented Spider-Man costume during his own New York debut. Spyder-D, however, wore it anyway, topped off with an applejack cocked starboard, his arms folded. The crowd went Smurfshit. (Like everything else, the Spider-Man suit would finish its evening at the Fever — in the trunk of Fever owner Sal Abbatiello’s car, somehow.)

The first time Spyder visited Larry Smith, he heard the “Sucker M.C.’s” demo and witnessed something extraordinary: Larry stood up and grabbed his own nuts. “He and Russell used to call it the ‘Five Finger Jammy.’ That’s when a song is so hot, you can’t do anything but grab your nuts.” Sometimes there’s no other recourse.

“Whenever Larry got happy, he grabbed his nuts,” confirms D.M.C. “He’d grab his nuts when he went to the Fever. So we started doing it onstage. It was like a high five. Michael Jackson grabbed his nuts because of hip-hop. He knew what time it was. That was all Larry.”5

“I think a lot of Larry rubbed off on Russell,” says Spyder. “They were so close, they’d finish each other’s sentences. Sometimes I couldn’t tell who was who. Or they would say something and just look up in the air and roll their eyes for effect. Or they’d say, ‘That’s some other shit.’6 Next thing you know, everyone associated with Rush Productions started talking and acting like Russell and Larry.” Their friendship would suffer a rift when Simmons began partnering with Rick Rubin and you all know how the story went.

“Larry was forgotten because of Raising Hell,” says D.M.C. of the group’s Rubin-produced breakthrough third album. “But he didn’t have to brag to claim the spot. He made the records. The Bomb Squad was trying to make hard Larry Smith records. They’d tell you that.”

“Friends,” you may notice, is kind of dark. Whodini was right. The dictionary doesn’t adequately support the complexities of friendship. And though Facebook is even more confused on the matter, the “We Love Larry Smith” page did allow people to leave messages while Simmons and members of Orange Krush visited the hospital and helped with Smith’s care.

Some posted songs from Whodini’s third album, the classy Back in Black, which offered some good ideas for future Larrys. “One Love” for Nas, “I’m a Ho” for Houston. (Though he wasn’t a fan of sampling, I think Larry’s DeVille would’ve appreciated him providing the undercarriage of “Still Tippin’.”)

I spent Christmas Eve marveling at the video for Whodini’s “Funky Beat,” in which Theo Huxtable, Donnie Simpson, master contortionist Lon Chaney, Run-D.M.C., welterweight Mark Breland, Oogie the puppet from The Uncle Floyd Show, and a few throwback Willis O’Brien dinosaurs all gather to pay respect. (But it’s really about that fleeting shimmer of synths at 3:08.) Then I received an email from a friend saying he once used “Freaks Come Out at Night” as a parenting tool when illustrating the concept of curfew. Not sure if it worked, but his kids loved it. Meanwhile, Spyder-D says his own kids are always hearing Larry’s hand-claps in other songs.

For his 21st birthday, Kurtis Blow received a drubbing from a go-go band at the Capitol Center in Washington, D.C. Orange Krush had played with Bob Marley and the Commodores at the Garden, but opening for Trouble Funk was an after-school whupping. “They came out there beating on chairs, the floors, the stage,” Larry Smith says. “Everything. We just got the hell out of there. We lost Kurtis, too. I think he ended up taking the bus back.” (Blow, for his part, does not remember this exit strategy, though he would be sure to incorporate go-go into his next album.)

It’s spring of 2001, and Larry is in my apartment telling stories. I’ve just moved to New York. He is affable and generous with his time. (No rush — the Fever’s been closed since 1986.)

We’ve been listening to “Out of Control,” an instrumental from Whodini’s platinum album Escape,7 laughing at one part — the words “voodoo on a stick” slowed down. A blurt of chthonic sludge from nowhere. It sounds like Roto-Rooter Rick. It’s also slightly terrifying.

I then ask Smith about Erol “Pumpkin” Bedward, a rival drummer and arranger from the Bronx who played on many early rap records. He and Smith each claimed to be King of the Beats. Larry explains how Pumpkin was the master of the “disco skip,” a casual flourish of the arm when playing. “Put on ‘Love Rap,’” he says. The credit reads: “Music by Pumpkin and friends.”

We end the afternoon with “Live at the Fever,” a record Smith produced for Lovebug Starski in 1983. The club becomes affected space, an exaggeration of sound created by his DMX, then part of a sampled memory on the Beastie Boys’ Paul’s Boutique, subdivided into hand-claps, shellfish, Rollos, and Dick Butkus. Then a Fever T-shirt worn by Adam Horovitz in the video for “So What’cha Want.” Then legend. That’s where Larry Smith goes.

Akili Walker, engineer for the Starski session, is the one who told me the story about the RV jump in Delaware. “We thought he was out of his mind. He said, ‘I’m sorry — I’m not missing that ferry.”

One can say, with confidence, that Larry Smith got to the Fever that night. I know they at least made the boat. When Orange Krush landed on deck, people put their hands in the air and applauded the driver.

Dave Tompkins’s first book, How to Wreck a Nice Beach: The Vocoder From World War II to Hip-Hop, is now out in paperback from StopSmiling/Melville House. Born in North Carolina, he currently lives in Brooklyn.