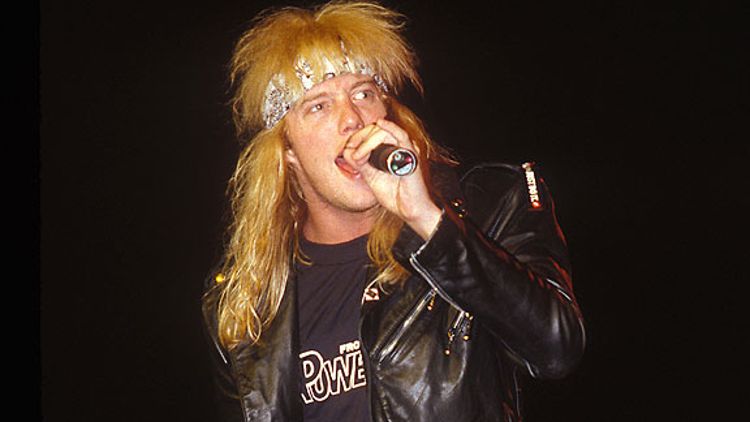 Jani Lane was the first person to speak from the stage at the first concert I ever paid money to see, a 1989 show at the West Fargo Fairgrounds featuring Warrant, Great White, and Ratt. In retrospect, that was a real triple-bill of tragedy — Ratt’s Robbin Crosby was the first major ’80s metal figure to contract HIV from heroin use, Great White was the accidental catalyst for the death of 100 people at a 2003 show in Rhode Island, and — today — the news broke that Lane was found dead at the age of 47 in Woodland Falls Hills, Calif. As I type this sentence, the cause of death has not been reported … but this was a 47-year-old musician who died in a hotel room. Do the math.

It’s easy to compliment the dead, but that’s often the only time we admit noncontextual truths: Lane was an incredible frontman, particularly in 1989. He was loquacious and funny and famous-looking, and Warrant tried so hard to be entertaining; they probably played for only 40 minutes, but they clearly did not want all the teenage girls wearing Ratt T-shirts in the mud to feel remotely ripped off. The only song most of the crowd knew was “Down Boys,” which they may have played twice; I remember they played “Heaven” and everybody sort of instantly knew this would be a supersuccessful single that a lot of guys would pretend to hate during prom. Considering how emotionally invested Warrant seemed in playing for 8,000 people in a city they knew nothing about, it must have been a wonderful time to be the singer in a band that seemed engineered for joy and hugeness. Yet I wonder how often Jani Lane was happy during the 22 years that followed. He had success, but it was the kind of success that’s hard to appreciate.

Lane wrote most of the music for Warrant and was extremely excited about the release of what would be their second album, which he wanted to title Uncle Tom’s Cabin. He thought the hypothetical title track, “Uncle Tom’s Cabin,” was the most sophisticated thing he’d ever composed, and it probably was. But the people at Columbia Records thought it was too understated and maybe “too political” (or something), so they told Lane to write an anthem that was consciously unserious. He supposedly wrote “Cherry Pie” in less than 15 minutes, made several million dollars, and regretted it for 15 years. When you interviewed Lane during the late ’90s, he would talk about “Cherry Pie” like a man who’d thoughtlessly married a gorgeous woman and immediately came to realize he’d irrevocably altered the very meaning of his life, but I guess Lane did that, too (in 1991 he married the actress from the “Cherry Pie” video, Bobbie Brown, but they divorced in ‘93). He sighed a lot. He still made jokes, but they were dark.

In general, Warrant had bad timing. They were blamed for killing heavy metal, even though they never exhibited any interest in being heavy or metallic. Warrant entered a genre of music after that genre had already peaked, which meant they were artificially pushed by industry insiders (who refused to accept that glam was fading) and unfairly maligned by self-consciously trendy fans (their ’91 tour with Trixter and Firehouse was mocked by everyone, including kids who went to the show and admitted it was awesome). Lane often told a story of walking into the Columbia offices in 1993 and expecting to see a framed poster of Warrant in the reception hallway, because that’s where it had always been; when he saw that this picture had been replaced by a likeness of Alice in Chains, he knew it meant something bad. But he kept trying. He really did. He still loved music. Critics will forever argue that the pop he made was fundamentally fake, and I understand what that argument entails. But Lane was not a fake person. When he did (what amounted to) a solo tour in ’96, he would make this weird pact with the audience: He would tell the crowd that he’d play all the old songs he kind of hated if they would just be willing to listen to the new songs he liked. That might sound retrospectively desperate, but that’s not how it felt at the time. It actually made him seem reasonable. He understood how expectation functioned and he realized that the experience of entertainment had no relationship to how non-fans viewed the quality of his work. Lane was less pretentious than most of the credible musicians who usurped his role in the popular culture.

Lane’s life got weird post-1996: A native of Northeast Ohio (and born with the paradoxical name of John Kennedy Oswald), he moved back to Cleveland and briefly became a chef. He gained weight and started wearing eyeglasses, and people thought this was hilarious, because guys who used to sing in rock bands are apparently supposed to live off blueberries and have 20/20 vision. He appeared on one of those terrible VH1 shows about losing weight and temporarily replaced the lead singer of Great White; he made a power-pop album that would have appealed to old Warrant fans if they’d only known it existed. He got a DUI and spent four months in jail. He leaves behind a 19-year-old daughter who probably looks a lot like the beautiful girls who used to be in Warrant videos. He died in a Comfort Inn, which just seems depressing as hell. I can’t tell if he had an obviously great life or a quietly tragic life. Probably both, which is how it goes for most people.

Filed Under: In Memoriam, Music, Obituary