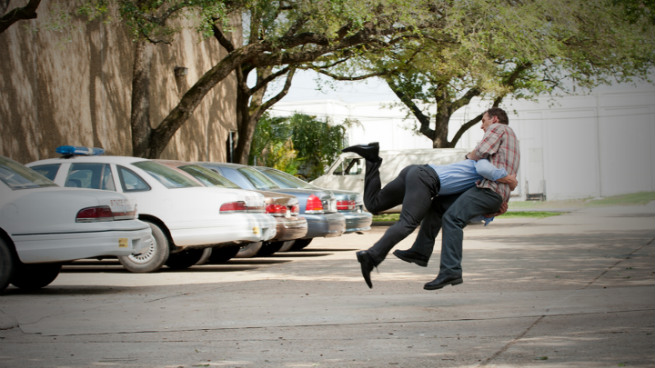 1. If you’ve been wondering about the stick triangle things left near the crime scenes that Rust has apparently been collecting (or making), well, don’t worry, I still don’t know what they mean. But I was alerted to the work of 20th-century fantasy artist Lee Brown Coye, known for his horror-fiction illustrations. Wooden sticks arranged in patterns are a recurrent theme in Coye’s work, based on a childhood experience where he found sticks set up in strange ways at an abandoned farmhouse. He never learned the origin of the stick shrine, and the farmhouse was destroyed in a flood. He related this story to his friend, horror-fiction writer Karl Edward Wagner, who wrote a 1974 short story based off it called “Sticks.” Coye illustrated some books for Wagner’s vanity imprint called … wait for it … Carcosa Press. In his story, Wagner’s sticks are “wired together at cross angles for no fathomable purpose” and make him think of “some bizarre crucifix.” He follows them toward a creepy house in the forest, where he discovers horrible things. It’s been noted that The Blair Witch Project follows the same arc as “Sticks.” 2. In between all the heavy ideas about humans, nature, and human nature, True Detective is hilarious! Did last week’s parking-lot fight scene remind anyone else of the big fight between Will Ferrell and John C. Reilly’s characters in Step Brothers?

3. Both of the True D boys have early, prescient crime-mystery credits on their résumés. One of Woody Harrelson’s pre-Cheers screen credits is the 1987 TV movie Bay Coven, which has a very Rosemary’s Baby plot about a secret coven of Satanists in a small, wholesome-seeming town. Harrelson’s character, Slater, meets his end reversing a Jeep off a cliff. Matthew McConaughey’s first onscreen appearance was on a 1992 episode of Unsolved Mysteries. Speaking of unsolved mysteries, one has to wonder if the success of True Detective has created a bump in EDtv streams. 4. What made Harrelson decide to become an actor? A girl, of course. Woody told Metro U.K.: “In high school, I realised that if you were a terrific athlete, you could attract girls. I wasn’t, so I had to look into some other possibilities. I got into theatre because a girl I liked saw me do an Elvis impersonation in the library and said I should be in the theatre. And I was like: ‘If she wants me to be in theatre, I’m going to be in theatre.’ Later on, I realised that most of us are never going to be rock stars, which is probably everybody’s real dream. So theatre is really our only chance to get up in front of a live audience.”

5. Since there may not be any actual tentacle monsters on True Detective, despite the smattering of references to H.P. Lovecraft’s fictional tentacle-faced monster, Cthulhu, you may have a hankering for some real-life tentacle monster action. You can satiate your desire for tentacle monsters with this video of a beautiful giant octopus attempting to grab a camera out of the hands of a group of divers off the coast of Point Lobos. “The octopus saw the divers before the divers saw it because the color-changing animal was perfectly camouflaged to match a pink and yellow rock.”