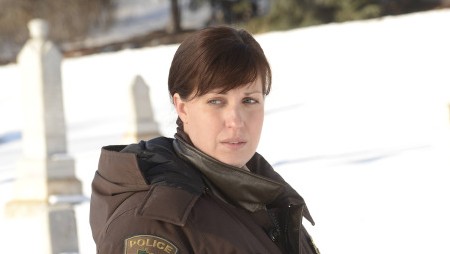 Leading up to Fargo, I wanted to talk to Bob Odenkirk or Martin Freeman or Colin Hanks or Billy Bob Thornton, the obvious preseason all-stars on a very deep acting roster. By the time the season premiere ended, I forgot them all and started Googling newcomer Allison Tolman. Her Molly Solverson isn’t just a completely different plucky Midwestern personality from Frances McDormand’s iconic Margie Gunderson — she’s also the moral center of the show, the only detective asking the right questions, and the sole person able to recognize the stark incompetence running rampant in the police force. Tolman got on the phone to discuss last night’s bloody episode, making a small-town crime saga in the wake of Breaking Bad, and dealing with the female-character-hatred industrial complex. [WARNING: Spoilers abound.]

So I’m pretty bummed you got shot by Colin Hanks.

It was rough, right? She was getting too close, they had to do something to take her back, set her off the trail. People are quite upset with the development, but the really savvy ones will go look at my IMDb page and see that I’m listed under 10 episodes.

I just figured Gus’s general blundering nature meant the shot couldn’t be life-threatening. Plus, it seems like you have to meet up with Billy Bob Thornton. Molly’s the best of the good and Malvo’s the worst of the worst.

It’s tricky not knowing if this is the kind of world, like Gus thinks, where what should happen will happen. Molly should get to take down Malvo and Lester, but we don’t know yet if this is that type of story.

Click here for all of our interviews with fascinating people from the worlds of sports and pop culture.
That’s a good way of putting it, absolutely. And I feel like yesterday’s episode, when I first read it, I was like, OK, gloves are off. People are dying left and right. People who were saying the last couple episodes were slow, I hope they got their fill last night.

I find every scene so riveting. It felt like Breaking Bad left this huge hole, True Detective filled it and then disappeared, and now Fargo‘s here.

Right. No, I know exactly what you mean. I was binge-watching Breaking Bad at the same time I was filming this show and I was like, “Man, this is great, we have really good timing. There’ll be a lot of people sad that this show is gone and we’re gonna be able to fill that void.” I think that’s all Noah [Hawley, showrunner and writer of every episode].

How was it watching Bob Odenkirk as you were filming with him?

That was a little disorienting. I also was watching Sherlock for a little while but I had to stop; that was too much, to see Martin and Bob at home and then to work with them.

Lately on some big dramas, this perverse disdain has been directed at female characters who are morally or intellectually superior to the male antiheroes — characters like Skyler White. Are you getting hit with any of that?

Yeah, I know exactly what you mean. Certainly not to the extent that Anna Gunn had to deal with — that was so bizarre. I was following that and was really appalled by the way that was unfolding. The people’s reaction to her character was so disturbing to me as a woman. I was like, “What’s wrong with our country?” It freaked me out, man. But I don’t think that I have exactly the same thing to worry about, because we know in the very beginning that Lester goes from zero to 60, whereas in Breaking Bad we sort of watched Walt deteriorate. I don’t know why that confused people; people gave him more slack for that reason and therefore hated Skyler more. But there are people online who are like, “Boo, Molly, we hate you.” But I know they’re just super Martin Freeman fans, so they want him to win no matter what. I don’t think it’s been quite as bad. 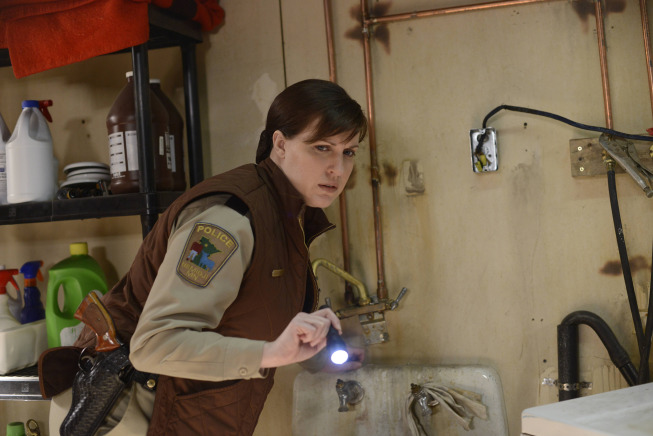 A lot of the narrative around you is what a “newcomer” you are. You’ve been working a long time, just not in TV. How did you actually feel being on set and landing this part?

It was definitely intimidating going into it. I knew I was gonna be way out of my depth and I was gonna be working with people who’ve been doing this a long time, and these really big personas. I told myself early that I was just gonna have to not be scared and I was gonna have to ask questions when I needed to know things. And then luckily everyone that I came into contact with was kind and patient and helpful. Everybody really gave me a lot of slack while I was learning things, so I had very little to worry about. Molly was wholly formed the first time I read her, so I just proceeded with this confidence that they knew what they wanted.

What can you tell me about Noah Hawley? A lot of us weren’t familiar with him before this, and now he just seems like this major talent we’ve gotta watch out for.

I certainly don’t think this is a fluke from Noah. I think it’s really gonna make him and put him on the map. He’s very, very talented, super funny, with this really sort of dark, twisted sense of humor. And on top of that he’s just a really nice, calm, calming presence on set. He’s just a really awesome guy to have around. I feel like people who work with him will work with him again.

What was it like working in this imaginary Midwest you guys created? Did you have experience in these kinds of communities? Was there any grappling with the authenticity?

I grew up in the suburbs, so I don’t have that kind of small-town experience. I think Noah’s writing is so strong that he formed that world really well, and I think he also kind of looked at it like we were living in the world of the film and not actual Minnesota, which was helpful.

Fargo reminds me how one of the editors here hated Alexander Payne’s Nebraska. It’s so infrequent to see the Midwest portrayed onscreen, and anyone who’s got roots there doesn’t want to see a big caricature.

I get it, I understand. I’m from Texas, and Texas has a reputation that far precedes actual Texas, and it is irritating sometimes. You’re like, no, when are we gonna see a movie that’s about the Texas that I know, which is an actual place with humans that have these fully formed lives? I understand the frustration, absolutely. I think having the film as a reference point was helpful, but probably not for people who are from Minnesota and were also frustrated by the film. It’s probably just further frustration for them.

I read you didn’t rewatch the movie because you didn’t want the Frances McDormand part in your head, but have you thought about it or been confronted with it?

I went back and watched it a few weeks into the filming, after we kind of settled in a little bit. That was helpful. But I haven’t watched it again since, and I’ll probably wait until the show’s over with. I think the series lives and breathes as its own entity. I felt that I’d given myself enough time to work with Molly that I could go back and watch Margie and that I would’ve created enough distance between the two of them that she wouldn’t bleed over into Molly, which was my concern.

Did this story get into your head at all? It’s getting extremely dark. The things Malvo and Lester have done are so awful, especially Malvo’s moves last night.

It’s hard to live in that dark place for a long time. We had a pretty happy set, so even when we were filming difficult things we were still excited to be at work. Most of the time you spend filming a show is time you spend without the cameras on, when you’re not acting. So that kind of defines the experience, is how much fun we had and what a good group we had.

Where are we most likely to see you going forward? Any sense or hopes?

I’m going to focus on acting for a little while and just kind of write in the background. Maybe in the future I’ll feel like there’s something that I wanna say and I’ll try to write a film or whatever. And we’re still waiting to see what happens with another season of Fargo, if there’s gonna be one, who’ll be involved. In the meantime, I’d really like to take as many varied roles as I can — I’d like to swing wildly between comedy and drama and stretch myself and see what I can do and show everybody what I’m capable of.

I think you should stick with this vibe and just be one of the leads for True Detective next season.

[Laughs.] You and a bunch of people on Twitter think that! They want me to be a cop.

Are you ready to not be a cop if it’s not Fargo?

I think it’s gonna be inevitable, I think I have a sort of blue-collar way about me. I tend to play nurses and waitresses and policewomen. I’m sure it’ll happen again.

Last thing: The fish falling from the sky last night. Do you know if we’re supposed to know what the hell happened there?

I don’t think it’s explored much further than this sort of unexplainable and very real plague after all of these invented plagues that Malvo has brought upon poor Stavros. I know there’s a scene with Gus and Stavros later on where they kind of talk about it a little bit, but they certainly don’t go into great depth.

‘Batman vs. Superman’ Has a Real Title Now. It’s Silly.