Her Looming Shadow Grows: The Complex Women of ‘True Detective’ 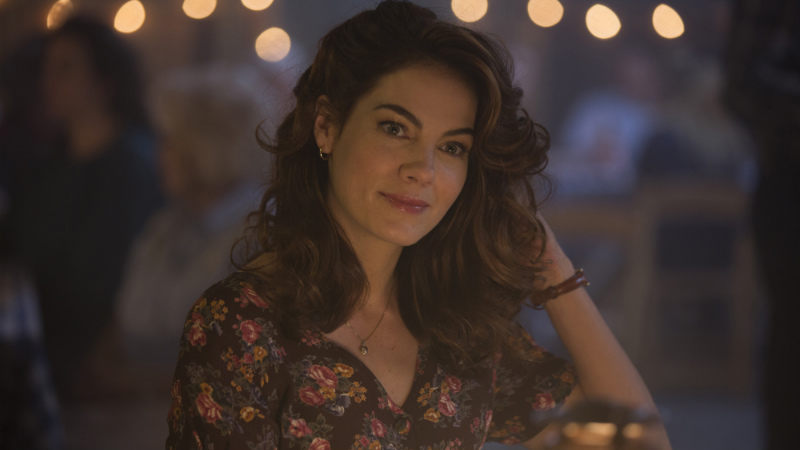 So far the conversation about True Detective has mostly centered on the show’s more outrageous and novel elements: the specter of tentacle monsters, the multiple-time-period structure, Alexandra Daddario’s rack. But equally compelling is the exploration of human relationships over a period of decades, most recently illustrated through the bizarre love triangle of Marty, Maggie, and Rust. It’s a credit to the acting abilities of Woody Harrelson, Michelle Monaghan, and Matthew McConaughey that they make this oldest of stories feel so vital — Rust is the deep-fried Lancelot to Maggie’s Guinevere.

Viewers had five episodes to wonder if we were imagining the attraction between Maggie and Rust, and whether they’d ever act on it. After seeing Beth’s ass shots on Marty’s phone (in 2002, during the dawn of nude selfies), Maggie has more than enough evidence to convict him of being an asshole. After testing her current value on the market at a bar, Maggie opted to visit Rust instead. Spoiler alert: They have incredibly intense sex to creepy music. They both orgasm quickly because the psychological intensity of the act is so unbelievably strong; they’re turned on by the idea of what they’re doing. And so is the audience, because we are a bunch of pervs. They feel terrible immediately afterward, their serotonin levels dropping through the floor in direct proportion to the thrill of the sexual high. This was another beautifully acted scene by Monaghan and McConaughey, and it’s clear that Maggie and Rust have a bond in their shared exhaustion with Marty. It’s a mutual respect that might also be founded in their unspoken illicit attraction, which Marty might not even have picked up on because he was too busy screwing around. The entire dynamic is exactly the kind of narrative tension you can only build on TV.

I take issue with the idea that Maggie is a lame character, because she seemed complicated to me from the first episode. Maybe some of that is due to Monaghan’s screen presence, which came into full bloom in Shane Black’s 2005 film Kiss Kiss Bang Bang. This week it was as if the show heard and immediately responded to the complaint that Monaghan wasn’t being given enough to do, though it now seems Maggie is more pissed than anyone that she’s been stuck playing the neglected wife. In Episode 6 she confronted those criticisms head-on by making the ultimate power play.

True Detective has been accused of not caring about its female characters, charged with only putting women onscreen to take their tops off and harangue the male leads. But I’ve never felt that to be true, at least not any more than a lot of other well-respected cable dramas. The Sopranos always had topless dancers lingering in the background onstage at the Bada Bing, and Game of Thrones has its scores of brothels. While Marty often treats women as less than equal human beings, Rust provides a counterbalance in perspective. We’re not supposed to cheer Marty on when he cheats on his wife. We get to see how giving into a short-term temptation ultimately screws you in the long run, how a life lived selfishly is not empowering but extremely isolating.

A show that takes up misogyny as one of its main subjects isn’t necessarily misogynistic. The difference between portraying something and endorsing it is often lost by the time it passes through the cathode ray tubes into a fandom. Don Draper, Walter White, Tony Soprano, and the other difficult men of TV’s latest golden age were not intended to be role models. Their seductiveness as antiheroes is corrosive. Tackling the appeal of self-centered, angry men in order to solve the riddle of persistent gender roles is sort of a trap: What you are trying to critique might just look cool. Far from being awesome dudes to emulate, they are all cautionary tales. But once it’s onscreen, even the worst bad behavior can be accidentally glamorized. It’s a broader cultural issue, one that extends past TV into music (say, Yeezus), film (say, The Wolf of Wall Street), and beyond (say, real life). Everyone identifies with powerful men onscreen, and nobody wants to identify with neglected wives and disposable sidepieces. Perhaps internalized misogyny has caused everyone, including women, to all want to be the hard-boiled cops. But not every female character can be Claire Underwood, knocking over every hurdle in her path. When we are shown female characters who have been forced into passive roles in their lives, we are usually meant to see they were just that: forced. It’s a very meaningful aspect of modern life, but inevitably thorny to discuss. Does the show want to have its cake (topless young hotties) and eat it too (misogynists get punished)? Yes, absolutely. But I don’t think the women on True Detective are mere virgins and whores. Far from it. I think that it’s through them we are made to see the very obvious problems with Marty’s view of women as virgins and whores. The show is also equally weighted toward Rust’s POV, which questions much of that worldview.

Am I bending over backward to defend this narrative trend because I know it’s not going away anytime soon? Maybe. But I don’t see Marty’s behavior as all that different from his fellow serial cheater Don Draper. Sure, it’s mildly dubious that hot young girls would be throwing themselves at Marty, but I guess the same muscle that allows me to suspend disbelief for some of True Detective’s other craziest aspects also accepts that Marty is a chick magnet. Honestly, in real life, the biggest womanizers aren’t always the most obvious. The characteristic alpha male mistake is to be dumb enough to think you’re smart enough not to get caught. The drama of a marriage crumbling from the inside can be just as fascinating as a violent crime drama, a horror story where the only corpse is an ailing relationship on the brink of death. Rust may have some compelling arguments that forgiveness is just a byproduct of forgetfulness and that time is secretly a pizza, but the three leads do seem to change and grow over the course of the years covered by the show. Maybe not always for the better, but in lots of small, subtly acted ways. It’s possible they don’t so much change as become more lucid about the ways in which they fuck up, and whether they are fated to or can still exercise free will. That is still a kind of growth, an Aeolian process that erodes any remaining shreds of youthful optimism left on the bone. They evolve as time passes, with easily identifiable corresponding era-appropriate hairstyles. Despite True Detective’s pulpiness, it doesn’t feel retro to me. Rust and Marty aren’t macho stereotypes of unfeeling men. They’re men who suffer from extremely powerful emotions, but react to them in very different ways. Rust practices a near-monastic nihilism, channeling his old addictive impulses into his obsessiveness about casework. Marty’s depression, possibly derived from years of watching terrible shit go unpunished, alchemizes into anger that he takes out on his family. His off-the-clock poison is young strange, another mode of acting out against domestic life. Maggie is long-suffering, but she’s not passive. She’s more of a Carmela Soprano than a Betty Draper. She’s not ignorant about her husband’s extracurriculars; she’s just opted to turn a blind-ish eye, but only up to a point. As she herself points out, marriage is a complicated thing, especially when there are children involved. She and Marty probably had a very passionate relationship at some earlier point, settled down too early, and endured a fairly common fate. Where Marty is reckless, Maggie is patient. She seems to be more book-smart than her husband, and that is part of the attraction to Rust, who, unlike her husband, is a keen observer of feelings. Rust also treats Maggie like a human being instead of somebody’s wife, which she desperately needs. Maggie isn’t dumb or naive. She knows exactly what to do: Play the one ace a woman furious with a cheating partner has by fucking his best friend. Maybe it’s a stretch to describe Rust and Marty as best friends when they are much more like frenemies, but they’re also something more than friends; they are partners. Like being in a band or on a team, they are connected by a bond that goes beyond casual male friendship into the realm of real relationships, the kind that require fights, talks, and communication. Because Maggie is such a well-thought-out and acted character, I also choose to see complexity in the characterization of the other women on True Detective. That Beth, the teen hooker who Rust and Marty encouraged to leave the brothel, is now working at a strip mall T-Mobile store felt pretty plausible to me. It’s a small-ass town. As for her choice to seduce Marty as a way to thank him for helping her to leave her old bad life at the bunny ranch, I just went with it. It does kind of feel like a crazy fantasy come true, that this hot underage girl he may have been fantasizing about for a decade since helping her would show up in his life and want to fuck him. But it also seemed straight out of a sex dream (or porn), which for me fit right into the tone of the show. If the encounter still seems a tiny bit far-fetched, it just adds to the eerieness of it. It’s all in the episode’s title: “Haunted Houses.” The central encounters between characters in this episode are earthshaking, the culmination of groundwork laid in the first episode and embroidered on until now. People make choices from which they cannot retreat. Marty’s prolonged efforts to get promoted to Lieutenant Save A Hoe finally backfire on him, Rust blows up the possibility of friendship with Marty, and Maggie chooses to repay Marty in the most painful way she can think of. Not that she gets off without any injuries. The about-face in Rust’s temperament after the seduction is absolutely terrifying. All of this was framed by the most recent spate of interrogations, in which Maggie’s short hair and chill countenance let us breathe a slight sigh of relief as she talks about finally separating from Marty. She got out! Of all the characters on the show, Maggie has always seemed like the one with the most potential to escape from the unspeakable horror poised to swallow us all.