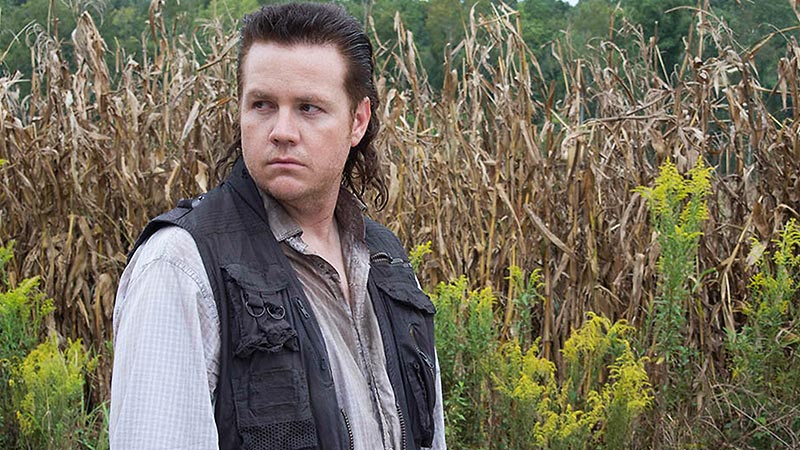 Another Sunday has come and gone, and while much of the world capped the weekend by marveling at the brutal display of fireworks with which Russia closed out the Sochi Games, Americans ages 18-49 took in the only sport they seem to care about these days: competitive corpse bashing. Forget hockey showdowns rife with political undertones; The Walking Dead has offered up a big-ticket item of its own: Sergeant. Abraham. Much like the Olympics’ über-hyped send-off, though, Abraham’s first outing failed to fully deliver on its promises of dramatic pyrotechnics. Instead, fan favorite Sergeant Asskicker got sucker-punched by an increasing de-emasculated (or re-masculated?) Glenn in a fight that featured all the flair of a playground brawl.

“Claimed,” like the Games, brought many ups and downs; some plotlines proved unexpectedly engaging, while others promising drama fizzled. No great surprise: For every taut beat of action or intriguing character development it delivers these days, The Walking Dead is just as likely to stumble, its butt landing embarrassingly on the ice. One man’s half-baked brownie is another’s molten chocolate cake, however. This episode finally gave us a glimmer of where the show is headed — and at least the cast is no longer stuck in a literal existential prison. Still, with only five episodes to go this season, Scott Gimple & Co. better keep their eyes trained on the tree line; otherwise, the finale might sneak up on them walker-style.

When Will the Band Get Back Together?

Rick Grimes and the Rickettes have gone their separate ways, and for now the writers seem content to let the various clumps of characters meander down different paths. There may be a reunion down the road (or down the train tracks, as it were), but this episode wasn’t about finding each other; it was largely a solo act, Grimes Unplugged. With Carl and Michonne out on a scavenging retreat and busy bonding over canned cheese and supposedly dead toddlers, the juiciest slices of suspense fell on Rick’s battered shoulders. I’ve griped plenty about Rick’s incessantly whiny descent into despair, but I have to give those puppy dog eyes credit where it’s due: When it comes to expressing paralytic fear, few do it better. After Carl and Michonne left the trio’s new home base, Papa Rick decided to recuperate with some Jack London short stories in the master bedroom, only to doze off and later awake to the sounds of menacing evil. No, Carl hadn’t left Deliverance playing in the living room: Armed intruders had stumbled upon Rick’s new domestic paradise.

With his Colt far afield in Carl’s limp adolescent hands, Rick did what any smart coed in an ’80s slasher film would do: He hid under the bed just as Anonymous Evil Dude A came in for a nap. Then, Anonymous Evil Dude B arrived and did what any villainous rube in a slasher film would do: He casually strangled his buddy over who got the best mattress. It wasn’t totally clear if Evil Dude B killed or merely knocked out Evil Dude A, but as A dropped to the floor, his bug eyes stared quizzically at Rick beneath the bed. With Evil Dude B now snoring up a storm, Rick darted out of the bed to hide in another room. Of course, as soon as he did, the Anonymous Evil Ringleader came upstairs to check on his pals. Fortunately, the remaining Anonymous Evil Dudes starting hooting with glee when they found Michonne’s clothes, and Evil Ringleader went back below.

Instead of waiting for the intruders to comically murder each other as they called shotgun on sexually assaulting Michonne, Rick, nervous ferret that he is, ducked into a bathroom — where Anonymous Evil Dude C was taking care of business. What followed required real suspension of disbelief: namely that no one would hear as Rick killed a much bigger man in a frantic wrestling match that demolished the tiny bathroom. But since it was such a nice change of pace to see Rick bite his tongue and take matters — and someone’s neck — into his own hands, I turned a blind eye.

Now armed with an Uzi, Rick climbed out a window and dropped down the side of the house just in time to see Michonne and Carl coming back down the road as the Evil Ringleader relaxed on the porch with a can of beans. Rick was armed and ready, but a little foresight saved him the trouble of using any bullets: He’d made sure to leave the bathroom door open a crack so Evil Dude C’s reanimated corpse would terrorize his comrades, allowing Rick, Michonne, and Carl to slip away without firing a shot. It was a taut little biathlon, and Rick took home the gold. Then, while wandering down a familiar set of railroad tracks, the trio came upon a map pointing to Terminus and headed off toward an inevitable reunion.

Does It Still Count As Dramatic If There’s No Drama?

While Rick was busy playing hide-and-choke, Carl and Michonne provided a quiet counterpoint. Their bonding began over breakfast, with Michonne again demonstrating the vast superiority of her current life as a katana-toting badass over her yuppie past by trying to convince Carl of the merits of soymilk. For once, the Deviant Masturbator and I agree: “Bleh.” Unfortunately, Carl burst his own bubble when he said he’d rather drink Judith’s baby formula, withdrawing sullenly at the thought of his supposedly dead sister. Later, after her Crazy Cheese zombie impression failed to lift Carl’s spirits, Michonne revealed she had lost a toddler son of her own.

The bonding culminated with Carl comforting Michonne after she’d stumbled upon a family suicide scene. I could practically hear the violins swell as Carl said he’d like to think that Judith and Michonne’s son, Andre, were now in the same place. I really don’t want to be a killjoy, and let’s be honest, The Walking Dead has given us our fill of knowing cynicism. Still, we know Judith’s not dead, and it really undercut the catharsis to know the characters are cathart-ing about something that’s not technically true.

Maybe not, but blowing a hole in your own gas tank sure does. Looking at you, Eugene. So far, I’ve given this episode high marks on the technical portion (Rick’s escape) and mixed scores on its artistic merits (Michonne and Carl’s special moment). Now it’s time for deductions. Given that Sergeant Abraham is a fan favorite and Michael Cudlitz is a fine actor, hopes are high that he’ll inject the series with some new life — or at least some fresh zombie-bashing brio. But Cudlitz could be the next De Niro and it wouldn’t matter if the writers put him in plotlines as tortured as this week’s.

The episode opened on some impressive Abraham walker kills, but Tara’s awkward observation about Abraham’s mid-murder smile gave a whiff of the rot to come. It went downhill from there. Glenn woke up in the back of Abraham’s truck and promptly threw a tantrum when Tara told him they’d been on the road for three hours, leaving Maggie somewhere far behind. Glenn then violated John Travolta’s cardinal rule from Pulp Fiction (“Don’t fuck with another man’s vehicle.”) by cracking the glass behind Abraham’s head to get him to stop. There’s nothing wrong with Glenn’s love for Maggie; his storming off to walk a couple hundred miles back to her is all well and good. Conversely, Abraham’s clumsy attempt to recruit Glenn to his cause by saying that Maggie was probably dead was just plain silly. It didn’t help that Rosita Espinosa stood mute in the background like some stripper from a Guns & Ammo calendar.

The whole scene hit bullshit overdrive when Abraham dangled the fact that his buddy Eugene knew what was causing the zombie apocalypse, but couldn’t tell anyone because it was classified. Next, Glenn and Abraham wrestled on the ground like asthmatic middle schoolers while the cornfields around them started bleeding walkers. And in the coup de grâce of ineptitude, Eugene started firing wildly with an assault rifle, blowing a hole in the gas tank and conveniently leaving the group no choice but to follow Glenn and Tara back toward Maggie.

It was contrived and it was inane, and attempting to explain it away with a socially inept joke from Eugene about his ignorance of rapid-fire weapons was mildly insulting. As much as this show could benefit from a sense of humor, slapstick isn’t quite the way to go. In a final banana cream pie to the audience’s face, Tara then impugned Abraham’s motives for wanting to save the world as they all hiked back toward Maggie. Sure, “Dr.” Eugene Porter probably knows as much about curing the zombie apocalypse as I do about treating meningitis, but a pissy dismissal of the one guy in the entire series who’s actually trying to do something is just nonsensical. The writers clearly needed to integrate Abraham and his crew into the Rickettes as quickly as possible, and so logic took a back seat.

Abraham may have disappointed in the group events, but he gets an individual gold for his showing in freestyle zombie thrashing. Not only did he kill the most walkers this week, he did so with panache and the smile that so amazed Tara. It’s hard to pick just one kill, but the simplicity of his crowbar to the jaw/rifle-stock to the skull combo was truly a thing of beauty. It’s always a pleasure to watch someone who clearly takes joy in his work. Tyreese and his therapeutic hammer will now have some real competition.

Filed Under: TV, Recaps, The Walking Dead, AMC, Zombie Kill of the Week, Rick Is The Worst, John Lopez

Her Looming Shadow Grows: The Complex Women of 'True Detective'