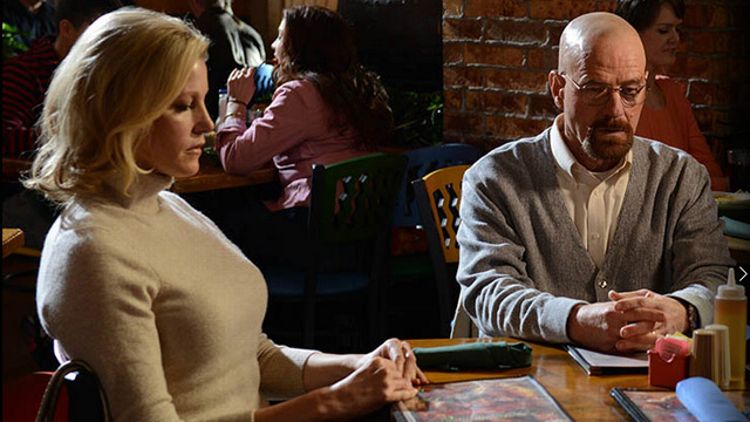 Over the weekend, Breaking Bad actor Anna Gunn took to the editorial page of the New York Times. Her topic? Not on-brand subject matter like drug legalization or lobbying on behalf of the Better Breakfast Bureau. Rather, her piece, titled “I Have a Character Issue,” was a smart and sobering recounting of the many ways in which fan anger at Skyler White has spilled over onto the woman charged with playing her. The Golden Age of Television’s “wives problem” has been noted by many and is referenced often by yours truly. It’s a topic I look forward to revisiting at length in the future. (For those interested in extra reading today, Mo Ryan’s take over at the Huffington Post is an excellent place to start.) But for now, let’s keep things brief with a rundown of the three main takeaways of Gunn’s parting shot.

In summation, Gunn writes “But I finally realized that most people’s hatred of Skyler had little to do with me and a lot to do with their own perception of women and wives.” This is patently true and certainly worrying. Fans come in all shapes and sizes, some passionate, others terrifying. Everyone brings their own baggage to the shows they love and some of those have packed great suitcases full of misogyny. Noticeably absent from those bulging wheelies is any sense of perspective, the power of words (especially words typed while under the steroidal influence of Internet anonymity), or, indeed, the difference between fiction and reality. Walter White’s moral track record now falls somewhere between a mass murderer and Thanos, yet Bryan Cranston gets high fives at church socials and police picnics. Skyler had an affair with a guy who, at least at first, didn’t appear to be lying to her 24/7 and was otherwise horrified when her husband revealed himself to be a criminal mastermind, and Anna Gunn gets death threats.

It’s important to note that for all of the unreasonable vitriol directed Gunn’s way — and some of the crazy, violent stuff she details rises well above “unreasonable” — this backlash didn’t happen in a vacuum. I’ve no doubt there are viewers who tuned in to Breaking Bad ready and willing to loathe anyone who stood in the way of Walter White and his head-shaving, meth-cooking, feel-bad express. But there are plenty of otherwise sane TV watchers who found something legitimately objectionable in the way Vince Gilligan and his writers portrayed Skyler White. Early seasons fell prey to the Carmela syndrome common in many of these Golden Age antihero shows — the wives are there to represent the normal, non-murdery world at large, which, in the context of the story, basically involves being a giant buzzkill — but even after Skyler was in on Walt’s secrets, the problems continued. In recent seasons the character has vacillated between cowed accomplice, depressed wine repository, and, most recently, earth-tone rocking, page-turning doyenne of a burgeoning car wash empire. While Walter took the express elevator down from Mr. Chips to Scarface, Skyler zigged and zagged like a remote control car with a ganked-up Badger twiddling the sticks.

Look, there’s no doubt that Walter’s actions put his wife in an impossible situation. There’s no one “good” or “right” way for her to have processed all his trauma and lies. But the writers of Breaking Bad usually approach impossible situations with the casual confidence you or I might approach a salad bar. If they can successfully imagine and stage the greatest train robbery in the Western world or, hell, end a classic TV series with near-unanimous fan approval, surely they could do more to improve the trajectory and consistency of Skyler White.

3. It’s Not Just About Actors and Fans

I think Gilligan is sincere when he speaks of not understanding all the Skyler vitriol, just as I think he sincerely wanted to create a riveting, genre-pushing, television drama about modern machismo and the potential evil lurking inside every man. The problem is that those two sincere sentiments are very much roped together and, it seems, often pulling in opposite directions. Due to his female characters’ distance from the story he set out to tell, Gilligan, like other big TV brains before him, simply never found out a way to make them as compelling as the males. (Though one gets the sense he’s tried harder in recent years, as Skyler has become more fraught and flecked with shades of gray and Marie and Lydia have come on strong to fill the vacuum left in the wake of some dear — and dearly departed — dudes.) That in and of itself isn’t a sin — but in the larger context it does point out a sin of omission in TV in general. Letting men have all the fun doesn’t just cheat fine actresses like Gunn out of an opportunity to break bad — it deprives all TV fans of a potentially fascinating universe of complicated, challenging characters. (Don’t believe me? Start watching Orange Is the New Black and The Americans.) By all means, single out those who say outlandish, venomous things about Anna Gunn (and Betty Draper and Lori Grimes and … ). Let’s hold up a mirror to their hateful, sexist bluster. But let’s not let those responsible for creating these limited, frustrating women off the hook in the process.