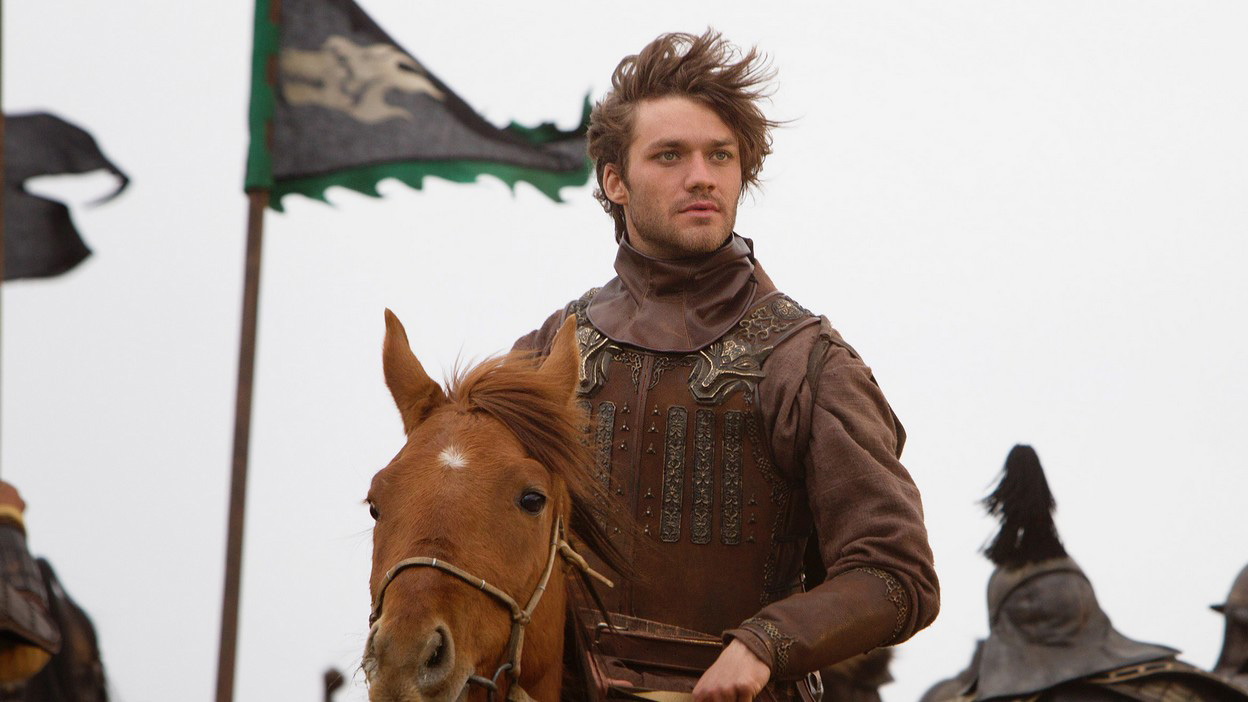 A group of hardy merchants sets off on a perilous journey. The only thing greater than their ambition is their greed. Their destination? The fabulous Far East. Their goal? Opening markets never before imagined. Along the way, they will battle fierce rivals, potentially fatal cultural misunderstandings, and the constant threat of piracy. Should they somehow manage to survive their pilgrimage, the merchants will be faced with one cruel, final twist as capricious as capitalism itself: What if no one is interested in buying the pricey goods they’re selling?

You’d think I was describing a new television show — and I am, sort of. But what I’m really talking about is the far more compelling drama behind a new television show. Marco Polo, which debuts on Netflix a week from Friday, is a wildly ambitious, 10-hour season set on and around the famed Silk Road in the second half of the 13th century. Early in the pilot, Marco, a young Venetian merchant, is sold into service of the court of the dread Kublai Khan, the Mongol emperor who, at the peak of his powers, controlled great swaths of Asia. It’s not too far a reach to suggest that Ted Sarandos, Netflix’s enterprising chief content officer, sees a bit of himself in the former — and would give anything to trade places with the latter. Marco Polo, produced at astronomical cost (the reported price tag is $90 million) and filmed on the other side of the planet, represents his company’s biggest push to conquer the world outside of America. It’s a power play so blatant and so ballsy that there’s almost no way for the action onscreen to match what’s been going on behind it.

So let’s begin instead with the more intriguing question: If Netflix is thriving domestically — it’s never a bad thing when your company’s name becomes a shorthand for a much larger activity1 — why is it in such a frenzy about taking its shows on the road? The answer is about as simple as 21st-century economics tends to be. In the near term, Netflix is indeed doing incredibly well. It remains the leader in the streaming-entertainment category it more or less created; its flexibility is so attractive that HBO is basically reinventing itself on the fly to avoid getting lapped. Netflix shows get nominated for major awards and draw major mainstream attention. Adam Sandler is making movies for Netflix. Tina Fey is making sitcoms.

But as smarter, cleaner-shaven men than I have long noted: Selling razors can make you a profit, but only selling razor blades can make you a fortune. The giant reach afforded by Netflix’s head start is quickly dwindling, and the real value has shifted from the streaming services to the streaming content. Just as there’s never been a better time in human history to be a television fan, so, too, has there never been a better time to be a television producer. Thanks to the vibrant afterlife provided by streaming media, the paychecks from successful projects never end.2 Content isn’t just king, it’s also currency: What separates Netflix from its scrappy, insanely rich rivals like Amazon and Yahoo is a deep bench of beloved programs. But that bench gets shallower every month as competition for streaming rights increases3 and more and more networks look to keep their valuable properties in house. (That’s why Game of Thrones is available only on HBO Go and why the length of time something like Fargo lingers on FXNow before migrating to another streaming service is only likely to  increase.) Expertise in marketing and metadata is all well and good, but what people really want is dragons. To maintain its fickle subscriber base, Netflix needs to provide exclusive shows its competitors can’t. 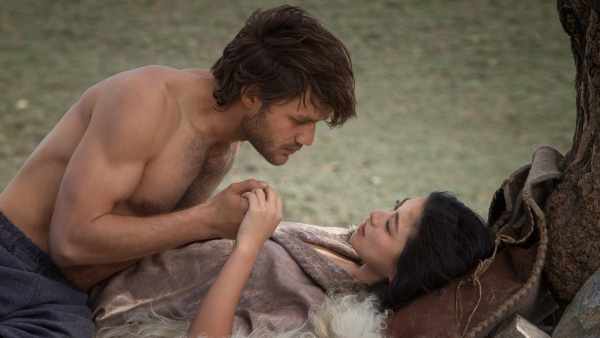 More important, to please its Wall Street masters, a publicly traded company like Netflix needs to own those shows and be able to export them to the largest possible audience. House of Cards has long been the service’s flagship series — it put the company on the map and onto the Emmy stage. But the show itself is owned by the ominously named independent studio Media Rights Capital, which got Netflix to spend a fortune to produce and air Cards domestically, and which made a killing — not, it should be noted, a Killing — selling it around the world to other broadcasters.4 And while Orange Is the New Black charmed U.S. viewers, its idiosyncratic tone and rough setting made it a harder sell abroad. It’s this unpleasant reality that caused Netflix’s stock price to plummet this fall, even as the company was making gargantuan deals left and right.

It’s not that Netflix was losing ground in any way: Its servers are still the toast of the industry, its catalogue remains the envy of all. It’s that it wasn’t growing fast enough — neither to placate its rapacious shareholders nor to justify its exploding bills.5 As the New York Times recently reported, Netflix’s Latin American launch stumbled badly and its European debut was far more sluggish than expected. And while much of Netflix’s recent activity, from Marco Polo to Crouching Tiger, Hidden Dragon 2, has a distinctly Asian tilt, breaking into the Chinese market remains “very complex,” according to Sarandos. And yet last week, HBO, with the flourish of a skilled supervillain, managed to do just that, reaching a deal with Chinese Internet giant Tencent to stream its original shows. To put this development in terms even a 13th-century warlord would understand: It’s all well and good to control the trade routes. But if you want to rule the world, what you really need to control is the spice.6

If you’re getting the feeling that bankrolling Marco Polo is as much a commercial decision as a creative one, give yourself three satchels of myrrh. Filmed in Italy, Kazakhstan, and Malaysia, with a cast of hundreds, the 10 episodes of Marco make up what is reportedly the most expensive season of television not to feature three-eyed ravens. The show’s wide-ranging setting is an eager nod to Netflix’s global designs, its paint-by-numbers plot a shrugging admission of the limitations of closed captioning. Full of blood and breasts, and generally devoid of brains, Marco Polo is the sort of project designed to appeal to the largest possible audience, which is probably why I can’t for the life of me imagine it appealing to anyone. The series is a sloppy, clattering mess, intended to draw international attention, not plaudits. The yawning intricacies of international taxation and trade are the perfect subject matter for a spectacle this cynical.

Marco himself is played by the young Italian actor Lorenzo Richelmy, who was apparently plucked from obscurity at the eleventh hour. (After a fruitless global search, Richelmy’s tape was finally noticed by the wife of showrunner John Fusco.) Judging from his performance, he wasn’t plucked hard enough. Dwarfed by the scale and scope of the production, Richelmy appears to be either intimidated, jet-lagged, or both. It’s as if he got into the wrong Town Car at the Kuala Lumpur airport and found himself on horseback instead of at the Holiday Inn. That said, I can’t blame him for being disoriented. The pilot is a herky-jerky affair, loping clumsily from flashbacks (detailing Marco’s dreamy youth in Venice before he stowed away with his dubious explorer father) to the show’s present, in which Marco is enslaved to the wily Kublai Khan. As played by British actor Benedict Wong, the khan is a gruff, uninspiring figure — though I’ll admit it’s hard to seem regal when forced to say things like “I hear from my Minister of Falconry that you’ve taken well to the hawks.” The relationship between the two, which is apparently supposed to fuel the series, is part Darth/Luke, part Tony/Christopher, and part Mr. Winslow/Urkel. The khan is continually impressed by the mind of his young charge, even as Marco’s steep learning curve had me wondering how one says “Did I do that?” in Mongol.

Not content to dust off hoary clichés by the fistful — there’s a blind kung fu master (Tom Wu) tasked with teaching Marco how to fight; there’s an oft-nude courtesan (Olivia Cheng) muttering nonsense about “danger games” — creator Fusco (Young Guns II) has taken to stacking them atop one another like mah-jongg tiles. In the second episode, that nude courtesan reveals that she, too, knows kung fu (what are the odds?!) and doesn’t need pants to prove it. The fact that English is a second language for much of the cast isn’t a problem; the resulting potpourri of accents and acting styles is actually fascinating to watch. It’s far more worrisome that familiarity with English doesn’t appear to be a priority for the writing staff, either.7 It’s as exhausting to watch Chinese actors recite mystical pabulum about “the strike of the praying mantis” and “the noble tiger” as it likely was for them to do it. And while I can’t say I knew much about the 13th century going in, the first few hours of Marco had me feeling that it’s a period in which I’d feel right at home. After all, noblewomen are surprisingly spunky, whores are happiest when writhing shirtless in the background, and reliable father figures are hard to come by. This isn’t revolutionary. It’s a recap of the last decade of TV.

The actual Marco Polo is famous in the West for bringing us the glorious gift of pasta.8 I fear that this Marco Polo may actually be the harbinger of something far more unpleasant. The creative specificity that fuels the very best TV shows — from The Wire to Orange Is the New Black — is anathema to the demands of global business, which views every artistic decision as a possible land mine. Why go to the trouble of investing in a show made thoughtfully by someone when you could fund a series that could, potentially, be for everyone? Of course, Marco Polo is plodding proof of how reliable that strategy is. But you don’t need to fly to Kazakhstan to see the creeping rot of corporate avarice. As cords are cut and the domestic media landscape becomes more uncertain, ratings behemoths like Game of Thrones and The Walking Dead are no longer crown jewels for their networks — they’re benchmarks. That both shows are actually good is almost an afterthought. Popular and easily exportable — dramatic bloodshed is the true universal language — they’re monetizable brands, as recognized and coveted as the latest iPhone. I’m not blaming businesses for acting so overtly like businesses, but I am bemoaning it. It leads to a trickle-down effect of seemingly small programming decisions, like FX pushing The Strain over The Bridge, that can add up to a seriously diminished medium. There’s simply too much money floating around out there to leave any of it, even tenges, on the table. It’s worth remembering that Marco Polo traveled to the other side of the world in search of riches. That he got anything else out of his journey — erudition, kung fu, macaroni — was almost beside the point.

This column has been updated since publication to clarify that Netflix made a deal with Media Rights Capital to fund, produce, and air House of Cards domestically. Netflix has a “long-term license” for House of Cards in every territory in which it operates except France.

Video ‘Game of Thrones’: Telltale’s ‘Iron From Ice’ Might Save You From Offseason Westeros Withdrawal