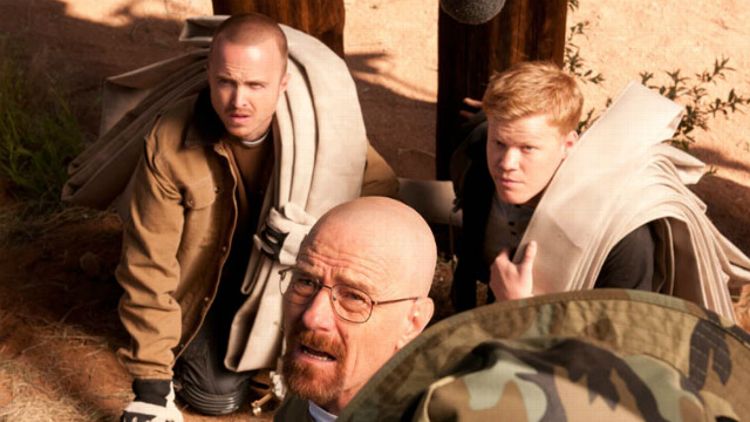 We’re all fascinated by danger, but terrified of risk. It’s why we press our face up against the glass at the zoo, raise our hands in the air while safely buckled into the car on Space Mountain, or watch other people eat Paula Deen’s food. It’s human nature, this desire to touch the flame but avoid being burned, and it’s something that Jesse Pinkman has come to understand well. Over the past four seasons, as his wardrobe has matured from the discount rack at Spencer Gifts to the executive collection from Today’s Mook, so, too, has his conscience. He may have ventilated Gale in a moment of panicked self-preservation, but otherwise he takes great pains to avoid hurting other people — especially young people — even if the product he’s cooking is a killer. And now, since launching the meth division of Vamonos Pest, it’s fallen to Jesse to play peacemaker and attempt to thread the needle between Mike’s murderous cool and Walt’s voracious ego. His is the voice of reason constantly trying to suggest a third way, a potential plan that can achieve the same devious goal as his partners’ but with less fatal ends: think of the magnets in the premiere, or even preserving Lydia’s life. But the devastating final moments of “Dead Freight” proved irrevocably (and quite unforgettably) that when you get down to it, Jesse’s placating third way is about as good as the third rail. There’s always a cost on Breaking Bad. As long as Walter White wants to get paid, the piper will be, too.

This notion of consequences has always figured heavily in Breaking Bad’s highly moral and tightly wound universe — we were taught two years ago that there are no half measures. But the lesson has never been as artfully or brutally conveyed as it was last night. The poor, doomed Grit delivery boy from the teaser — lonely and risk-taking, like a denim-clad mini-Pinkman — was brave enough to fondle the tarantula for a few fleeting seconds. But what he really wanted was to own the danger, to carry it home with him; to have it under control. This, of course, isn’t possible. The bug stayed in its bottle, but the kid got bit anyway.

It’s this cruel fearlessness that separates Breaking Bad from the rest of the antihero-fueled entertainment out there; the harsh lessons apply to those of us in the audience as well. Vince Gilligan — and certainly George Mastras, the writer-director of this instant masterpiece — knows all too well that the reason we love heist movies is the delicious desire to see bad trump good. For 40-plus minutes, “Dead Freight” was the best Hollywood razzle-dazzle of the year, a Great Train Robbery filmed with cinematic style and panache that didn’t skimp on any of the classic beats: the crazy odds, the plan that “just might” work, the ragtag crew, the complicating wild-card, the thrilling victory. For much of it — right up until Bizarro Lou Diamond Phillips shows up to help nudge the truck out of the way — the sheer joy the cast and crew must have felt filming the sucker is palpable. But because this is Breaking Bad, we have to take the pill with the sugar. We wanted the criminals to succeed, and if there’s one thing Mike knows about, it’s criminals. As he put it, “There are two kinds of heist. Those where the guys get away with it and those who leave witnesses.” The tarantula won’t stay in the glass jar forever, and neither will the horror stay safely behind the flat-screen. We got what we wanted and a blameless kid died for it. There’s a real town in New Mexico called Truth Or Consequences. In Gilligan’s Albuquerque, you swap the “or” for an “and.” Whenever these guys win, somebody ends up losing.

But despite all of that, Mrs. Lincoln, how was the play? Turns out it was pretty enjoyable! Lydia Rodarte-Quail (the names on this show!) is quickly becoming a favorite thanks to Laura Fraser’s frantic hangnail of a performance. She’s also the perfect foil for Walter in that she has plenty to offer his vanity, both in the form of challenges and in the enormous frustration her continued existence presents to Mike. (Nothing endears someone to Walter White faster than putting a hit out on the hit man, even if it is a quavery bird like Ms. Quail.) The Abu Ghraib-y scene in which she crank calls the DEA to discover just what they know about the barrel GPS was stellar (the lesson, it turns out, is what anyone who bought a Mike Jones album could’ve already told you: blame Houston) and laid the tracks for everything that followed. Great also was the expansion of the well-worn Three Stooges dynamic (Walt says “yes,” Mike says “no,” Jesse says “maybe, bitch”) with new additions to the gang: Bill Burr, on loan from Saul’s employ, as the world’s least engine-savvy truck driver, and Jesse Plemons as the thieving, surprise-pistol-packing Todd.

(A note on Todd firing that final, fatal shot. Yes: the writers are trolling us. There’s no way producers as methodical as these don’t know all about Plemons’s previous life on Friday Night Lights as Landry Fields Clarke, the least-likely accidental murderer in American history. But here’s the thing: not all trolling is bad! It’s a playful winking at our expectations in the same vein as Walter Jr.’s singular obsession with bacon, or last week when Marie blithely noted that “it felt a lot longer” than a year since Walt’s 50th. When Walt asked Todd if he was trustworthy while leaning on a shovel, I figured not even Landry’s field-goal-kicking power would save him from kicking the bucket before the end of the hour. I should have known that only Vince Gilligan could turn a joke murderer into a murderous joke on the rest of us.)

Even the family business was pleasurable this week. Walt’s performance-art pathos in front of Hank was skillful — he knew nothing could buy him some time alone in the new ASAC’s office like crocodile tears — but once again displayed a very unscientific sloppiness: Hank’s not going to keep excusing all the flashy purchases forever. It’s not just the giant watch: Hank’s become remarkably watchful since getting promoted — quieter, wiser. He’s not going be distracted for long by anything frivolous like marital discord. Or sea bass. He’s also, quite clearly, destined to become more than just Uncle Hank to angel baby Holly. Flynn (yes, we’re back to that) seems due for some hard truth, and maybe some hard-cooked eggs. But when it all goes to hell, his sister will just move into a new, most likely purple playpen and continue her calm, crying-free existence.

And while the dimmers in the White House remain stuck on the “Tribeca Mortuary” setting, the stubborn sparks between Walt and Skyler continue to fly. It seems a bit much that Anna Gunn should have to repeat yet again her problematic logic for removing the kids but sticking around (just a season ago, wasn’t she flipping coins at the Four Corners?), but I love everything that’s bubbling up between them: about fear and loathing, about poison and cancer. “I’m not your wife. I’m your hostage,” Skyler spits, between mouthfuls of homicidal nicotine. Krazy-8 was Walter’s first domestic hostage, and that didn’t end awfully well for anyone. And lest you forget, Chekhov’s Ricin is still stashed in the walls of the once-happy couple’s bedroom. Many have smartly suggested that Skyler’s Virginia Slims are part of a long game to poison her husband. I’m beginning to get the sinking, sickening feeling that he’s going to beat her to it. She’s right to be scared, but there are plenty of ways to murder people, many of them far worse than having a gun pointed at your head.

But, really, what will linger about this episode is the bravura heist scene. And well it should. Has there ever been something on television simultaneously so wonderful to watch and so miserable to endure? Even if the details he spilled to Hank and Marie were untrue, Walt remains the consummate gambler: always improbably hitting big, and inevitably busting much, much bigger. In a summer full of pop heroes and recycled action, “Dead Freight” may have been the best blockbuster of all. It was a pitch-perfect popcorn flick, except that just before the lights go up, all the ushers are queued by the exit, waiting to punch you in the stomach. The takeaway isn’t that there are no clean getaways. On Breaking Bad, there are no getaways at all.

Songs of the Week: Trae the Truth Reps Texas, Jessie Ware Talks Sweetly, and Freddie Gibbs Invites You Over to Sell You Drugs