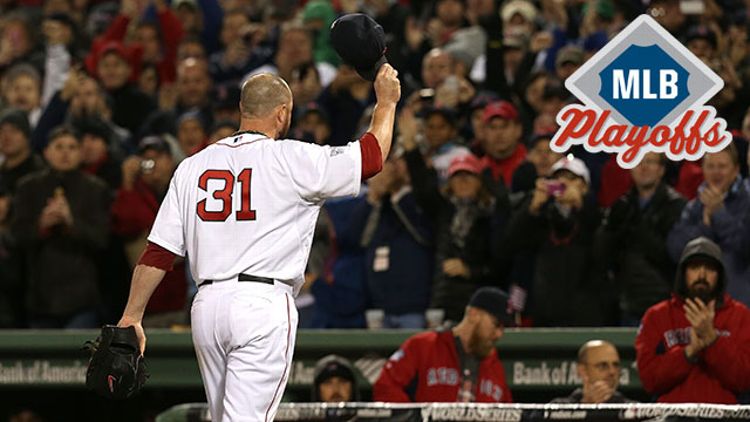 The pitching matchup for Game 1 of the World Series looked like a potential mismatch. The overmatched team would have to compensate by grinding out productive at-bats, playing better defense than the team in the other dugout, and getting at least a decent performance from its own starter.

Turns out it was a mismatch, but not the way you might’ve expected. Jon Lester, not Adam Wainwright, was the pitcher in complete control Wednesday night. Throw in the Red Sox’s productive at-bats and superior defense, and we got a blowout. Boston 8, St. Louis 1.

Lester’s best pitch in Game 1 was his cutter — which is odd, because it hasn’t been a particularly great pitch for him the past two seasons, after serving as his bread-and-butter pitch in the three seasons before that. Among the 31 qualified pitchers who threw a cutter this year, Lester’s yielded the 25th-best results. Lester’s two best pitches this year were his fastball and his changeup; his worst pitch was his cutter.

But he dominated with that pitch against the Cardinals. Facing Carlos Beltran in the first, Lester got ahead 0-2, then fired a nasty cutter that broke way inside. Beltran swung and missed at the pitch, which ended up near his ankles. Having established the pitch in the more traditional Mariano Rivera mode, Lester began attacking the other side of the plate. Ahead on Yadier Molina 1-2 in the second, Lester started a cutter a few inches off the plate, then watched it break to the perfect spot: knee-high, outside corner, called strike three. What he did to the next batter, David Freese, was downright cruel.

• 93 mph fastball up, inside corner, called strike one

• 75 mph curve, knee-high outside corner, should’ve been called a strike, instead, ball one

• 89 mph cutter with heavy sink, inside corner, Freese swings over it by a foot

One inning later, Lester struck out Matt Carpenter looking, making it four K’s in three innings, with his cutter serving as the knockout pitch every time. Then, with hitters gearing up for the cutter, Lester switched it up. His strikeout of Matt Holliday in the fourth was a thing of beauty, coming on a big, sweeping 75 mph curve that made Holliday look silly. So it went from there. Tossing 112 pitches in 7⅔ innings, Lester fanned eight batters, walked just one, and gave up just five singles. That performance marked a rare feat for a starting pitcher under Lester’s circumstances. As ESPN Stats & Info noted, Lester became just the third pitcher to allow no runs in each of his first two World Series starts (the others are Madison Bumgarner and Christy Mathewson). Lester also entered rare company in the following ways:

The Cardinals did mount a serious threat in the fourth. Trailing 5-0, St. Louis got a leadoff walk from Jon Jay. Holliday followed with that curveball strikeout. Allen Craig then reached out for a pitch four inches off the plate, tapping a six-hopper up the middle, just out of Stephen Drew’s reach. Molina then hit a grounder that would’ve been a double play if it was hit a foot more to one side, but instead went for another seeing-eye single. With a chance to get back in the game with one swing, perennial playoff hero Freese came up, worked the count to 2-1, got a pitch out over the plate … and tapped into a 1-2-3 double play, the first time that has happened in a World Series game in 40 years.

That was one of many lowlights in what has to be considered the Cardinals’ worst game of the season. Their defense was atrocious. In the bottom of the first, the Red Sox put two runners on with one out. David Ortiz then hit a chopper to second. Carpenter tossed to Pete Kozma covering the bag, setting up what figured to be a double play, or at the very least a forceout. Instead, Kozma, focusing on making the turn more than catching the ball cleanly, let it fall to the turf. Second-base umpire Dana DeMuth initially ruled it an out, before all five of his umpire colleagues, everyone at Fenway Park, and every single person watching anywhere pointed him to the correct call. That miscue led to a three-run double by Mike Napoli.

The second inning produced two more runs for the Red Sox, thanks largely to even uglier Cardinals defense. Leading off the inning, Drew cracked a popup to about 10 feet in front of the mound. Wainwright raised his arms, called for the ball, saw Molina racing toward him, and …

After a softly hit blooper that was very nearly caught by Carpenter, Wainwright retired Jacoby Ellsbury on a popout to left. Then in the same situation he faced in the first (runners on first and second, one out), Wainwright induced another ground ball. This one wasn’t going to be a double play, not with the ball hit into the hole and the speedy Shane Victorino running to first. But slow-footed David Ross figured to be a dead duck at second as long as Kozma executed anything close to a competent play. Instead, he booted another one, making him just the second shortstop in the past 30 years to make two errors in one World Series game. After grabbing that early 5-0 lead, then getting that double-play ball from Freese, the Sox coasted to an easy win.

The Game 1 winner has gone on to win 21 of the past 25 World Series — though the overall success rate is a less overwhelming 62 percent. But the Cardinals’ loss both exposed their weaknesses and potentially weakened their roster.

First, St. Louis squandered one of its few, clear advantages in this series, Wainwright’s statistical superiority over all Red Sox starters. Cards manager Mike Matheny had a chance to do something interesting with Wainwright after those first two disastrous innings, too. After Boston’s fifth run scored, the likelihood that the Red Sox would win the game surged to 92 percent, per this win expectancy chart. Given those odds, Wainwright having thrown 60 pitches through two innings, and his command being off (although he might’ve gotten out of the first two innings down 1-0 but for better defense behind him and a couple of breaks), you could’ve made a case for pulling Wainwright.

Yank him at that point and maybe you can pitch him again in Game 3 on two days’ rest, setting up a possible Game 7 start on normal rest if the series went that long. Even getting Wainwright back for Game 4 instead of his normally scheduled Game 5 start carried some appeal, since he could then be used as a viable relief weapon if a Game 7 were to happen. Instead, Matheny left Wainwright in for five innings and 95 pitches. It wasn’t a gimme decision by any means — win expectancy charts are hardly immutable, the Cardinals still had a chance, and trying to get too aggressive with Wainwright might’ve ended badly if he came back and started too soon. Still, the early Boston barrage offered at least the possibility for the Cardinals to make something good out of a bad situation, such as not using a pedestrian pitcher like Joe Kelly later in the series against baseball’s best offense. Now, that’s no longer an option.

Meanwhile, Game 1 exposed one of the weaknesses we discussed in our World Series preview. In Kozma and Freese, the Cardinals are carrying two lineup weak spots that the Red Sox don’t really have (Drew is slumping in a small sample of playof games, but he’s historically a good hitter against right-handed pitchers). The left side of the Cardinals’ infield combined to go 1-for-7 with a single, two strikeouts, that crippling double play, and three errors. Wednesday’s game also highlighted another Cardinals weakness: their poor defense. St. Louis ranked 27th in Ultimate Zone Rating this year, with only the lowly Astros, Phillies, and Mariners playing worse defense per that advanced metric. That Kozma, the team’s best non-Molina defender, blew two key plays hardly helped, especially since he brings no other tangible value to the team as the second-worst hitter in the big leagues among the 204 players with at least 400 plate appearances.

The news only got worse when Beltran was forced to leave the game one inning after smashing into the right-field wall while robbing Ortiz of a grand slam. Even with Beltran healthy and Craig now back in the lineup, the Cards are not a good power-hitting team, ranking just 27th in home runs. If Beltran is forced to miss any more time, the Cardinals face the prospect of being heavily outclassed in team defense and baserunning, with an already big power gap between the two teams made even wider.

If Michael Wacha has got another Bob Gibson start in him, tonight would be a great time for that to happen.