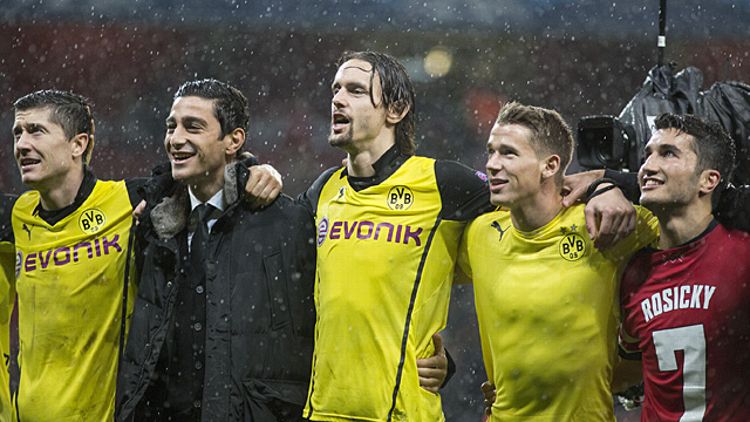 A look at this week’s Champions League action.

Spike Friedman: Borussia Dortmund’s aggressive pressing effectively neutralized what had been a prolific Arsenal attack, before a late goal against the run of play gave the Germans a crucial 2-1 win at the Emirates. That Dortmund pressed effectively without dominating possession is unsurprising; in last year’s UCL semifinal against Real Madrid, Jurgen Klopp’s side targeted Xabi Alonso, unleashing Mario Gotze on the Spanish midfielder in an effort to disrupt Madrid’s ability to switch fields. However, the threat he was facing in Arsenal was very different than Madrid’s attack, which derives so much of its impetus through the brilliance of Cristiano Ronaldo cutting in from the left.

Arsenal’s early-season success has been based on the interplay between its central attackers. With Theo Walcott, Lukas Podolski, and Alex Oxlade-Chamberlain injured, the play of newcomer Mesut Ozil, along with a brilliant Aaron Ramsey, a healthy (by his standards) Jack Wilshere, and an in-form Olivier Giroud has allowed Arsenal to pass their way through the middle of opposing defenses.

Klopp’s strategy (and we’ll give him credit for the tactics in this match despite his touchline ban for losing his mind against Napoli) involved deeper lying midfielders Sven Bender and Nuri Sahin aggressively playing the passing lanes between Ramsey and Ozil in the middle of the pitch. He also had Marco Reus and Henrikh Mkhitaryan press Ramsey and Tomas Rosicky when they picked up the ball in deeper areas.

This pressure led to Dortmund’s first goal; Reus was able to take the ball off Ramsey, and two passes later Mkhitaryan put the ball in the back of the net. Ramsey’s turnover is both something of a heat check, and the result of Dortmund’s game plan. Once Ramsey took his second touch, he had no passing lanes available; Mikel Arteta had moved to the other side of Robert Lewandowski, and Wilshere was cut off, leaving Ramsey stranded. Given that an Arsenal midfielder is not going to send the ball long, Ramsey’s attempted take-on makes sense, even if it was an unnecessarily risky decision.

Arteta became Arsenal’s danger man. In many ways similar to Madrid’s Alonso, he played brilliantly as the most influential midfielder for the Gunners in this match, making 12 tackles and completing 80-of-88 passes with more than half moving the ball forward. However, most of these passes were directed into the wider areas of the middle band of the pitch. Without dynamic wide players available, this meant Arsenal’s cutting edge was lacking for most of the match. The team managed only a handful of clear-cut chances before the 60th minute (including their goal, which was as much the result of Giroud’s work rate as any tactical dynamism). What little success Arsenal had attacking the center of the pitch was quickly neutralized by a sublime performance from Dortmund center backs Mats Hummels and Neven Subotic.

Arsenal looked better when Arsene Wenger shifted Ozil out wide and brought on Santi Cazorla for Wilshere. While neither of these players will ever be confused for a traditional winger, this move got Arsenal’s most creative players out of the vice grip of Dortmund’s press. Naturally, because of the second law of thermodynamics, they would concede the winner after Cazorla hit the woodwork, Hummels and Subotic made a number of heroic interventions, and makeshift fullback Kevin Grosskreutz, whose delivery was poor for most of the evening, managed to cross one ball with a modicum of accuracy. These things happen.

This was a closely contested match, and with Dortmund grabbing all three points at the Emirates, it makes the return fixture the most crucial match of the group stage. With Napoli equaling Dortmund and Arsenal with six points through three matches, the group predicted by many (though admittedly not me) to be the Group of Death is playing out as such.

He Is Zlatan, You Are Not Zlatan

Friedman: This goal is more impressive than the aggregation of everything you and I have done over the course of our entire lives. This is also Zlatan’s second-most impressive of the six goals he has scored in the past four days.

Remember, only one of Zlatan and Ronaldo is going to be playing in the World Cup finals. When it comes time to choose whom to root for, there is no choice.

How Not to Kick a Soccer Ball

Mike L. Goodman: If Zlatan reached the epitome of kicking the snot out of the ball, it’s only fair that Arturo Vidal would provide us with the anti-Zlatan on the same day. Extra points for desperately pointing as if he was fouled at the end of it.

Goodman: Whether it’s the caginess of a tournament structure, the relative unfamiliarity of opponents, the talent disparities, or just the sheer amount of skill on display, the rhythms of Champions League soccer are just different than your normal weekend games. At its worst that means cagey games filled with defensive positioning and cynical tackling. At its best it leads to the wide variety of extremely entertaining counterattacking play. That’s what we saw this week, as some of the best in the world punished their opponents for just the slightest of mistakes.

Borussia Dortmund did it the way they’ve been doing it for years: keep it on the ground, ping four or five passes together at speed, and then have no less than five guys sprint forward in the dying moments of a hard-fought game. Back when they were just a young, talented upstart club, this was Dortmund’s primary means of scoring goals. Now that they’ve morphed into a true European superpower, the team often controls the ball more and buries opponents under an avalanche of shots. It was fun to see them go back to basics on the road at Arsenal.

As Dortmund evolved they handed off the mantle of “Best Counterattacking Team in Europe” to Atletico Madrid. The less-heralded Madrid team is one of only two teams from major leagues to average less than 50 percent possession and qualify for the Champions League (the other, Bayer Leverkusen, hung four goals on Shakhtar Donetsk this week, although somehow not a single one was the result of a pure counterattack). It helps when you can kick it to your budding superstar striker Diego Costa, just inside his own half, and then let him run at a couple of defenders, skin them mercilessly, and poke it into the net.

And finally there’s the granddaddy of them all, Jose Mourinho. Whether it’s Porto, Inter Milan, Real Madrid, or now (again) Chelsea, nobody counterattacks like a Mourinho side defending a lead. Handing Mourinho the first goal in a big match is like going down into a basement in a horror movie: You’re just asking to get slaughtered. And Chelsea didn’t disappoint when they traveled to Schalke. Both goals were the same, a quick pass from the edge of Chelsea’s own area out to Eden Hazard on the wing, and then two or three Chelsea players slicing a defense to shreds. It doesn’t have the flowing beauty of Dortmund, or the individual brilliance of Atletico; instead, it relies on killer ruthless efficiency.

When coaches play boring, defensive brands of soccer, that is what they’re guarding against.

Friedman: On Wednesday, the most bored man in the world was Bayern Munich keeper Manuel Neuer. Also, maybe Dortmund won’t be challenging for the Champions League trophy. Maybe no one will.

Goodman: They still actually play sports and kick balls and stuff. They both scored for Galatasaray, who control their own destiny in Group B, sitting above Juventus for the second spot halfway through the group stages. It’s fitting that Sneijder, who has never been as good as he was under Mourinho, scored at the end of a textbook counterattack when Galatasaray were already up a goal.