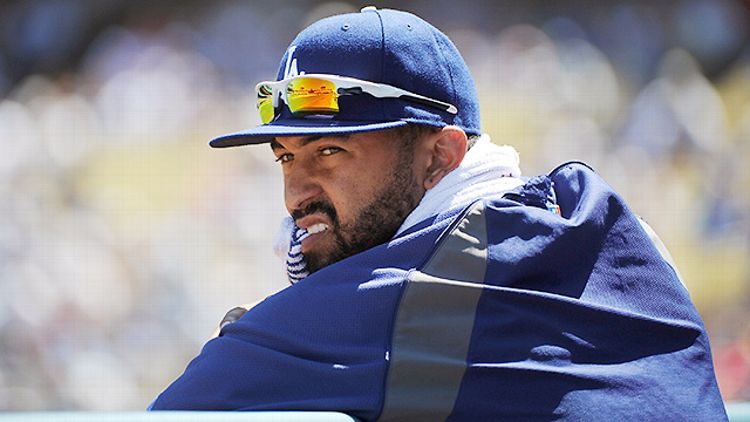 We’ve seen more hot stove action to this point than in any other season in recent memory. Still, plenty of questions remain as baseball’s annual winter meetings begin today. Short-handed teams will look to fill their roster holes before the pool of quality players dries and test the trade market as the free-agent crop dwindles; contenders will aim to shore up their squads; and the handful of remaining impact free agents will try to snag big deals before the money train grinds to a halt.

Here are five story lines to watch as baseball’s executives gather in Orlando.

1. Are the Dodgers Going to Trade Matt Kemp?

My hunch: Yes. It just makes too much sense to not happen. For starters, the Dodgers have a positional logjam. Kemp is one of four outfielders on the major league roster who should be starting, and it’s not as though the Dodgers can DH Kemp, Carl Crawford, Andre Ethier, or Yasiel Puig. There’s also the health factor, as Kemp’s injuries have transformed him from an MVP-caliber star in 2011 to a replacement-level player just two years later. There are concerns over Kemp’s ability to play a passable center field even if he can stay in the lineup. There are rumors of a rift between Kemp and upper management. And then there’s the fact that the Dodgers’ goal from the get-go was to make a splash early on, then settle into a saner business model in which scouting and player development matter, the roster includes both high-priced stars and young up-and-comers, and there’s at least a shred of fiscal prudence, even if the payroll remains high.

There’s also the other side of the coin, which is that teams still regard Kemp as a potential impact player. He’s only 29 years old, and he’s a huge source of power at a time when those are nearly impossible to find.

Boston is the team most frequently linked to Kemp. The Red Sox lost Jacoby Ellsbury to the Yankees, and might not yet be willing to give Jackie Bradley Jr. the starting center field job. Of course, one big reason the Red Sox just won the World Series is that they dumped a quarter-billion dollars in contracts on the Dodgers in August 2012; it might be counterintuitive for Boston to turn around and take a huge contract back from the same trade partner.

If it’s not Boston, another team (Seattle? Arizona?) should be willing to spend big money on a player who could still be a star if he moves beyond shaky health. If the Dodgers are willing to pick up part of Kemp’s salary, it would make striking a deal even easier.

2. Are the Blue Jays Going to Make Another Splash?

Toronto made two blockbuster trades last offseason. The first deal netted Jose Reyes, Josh Johnson, and Mark Buehrle in a 12-player deal that ranks as one of the biggest ever between two teams. Four weeks later, the Jays snagged R.A. Dickey in a seven-player deal with the Mets. The two trades signified a newfound commitment by the Blue Jays (and their Goliath corporate owner, Rogers Communications) to spend money like the mega-market team they are. The moves also removed several very good prospects from the team’s farm system. With the Red Sox coming off a World Series title, the Rays looking like they’ll be tough for the seventh year in a row, and the Yankees and Orioles looking at least competitive, the Jays need to decide if they want to double down on last year’s moves or be more conservative this time around.

One rumor making the rounds has the Jays mulling a blockbuster deal featuring Toronto slugger Edwin Encarnacion and Rays ace David Price. Realistically, though, Toronto has gone too far down the road of adding veterans and trying to win now to justify trading one of the best power hitters in the game, even though starting pitching needs to be the team’s top priority. Fortunately, the current starting pitching market allows for a possible middle-ground approach. There are still several B-plus starters there for the taking, including Ervin Santana, Ubaldo Jimenez, and Matt Garza. Garza is particularly intriguing, given that he’s only 30 years old, has years of experience pitching in the rough AL East, and is the only one of these three pitchers who won’t cost the signing team a compensatory draft pick. On the other hand, Garza made just 42 combined starts over the past two seasons, and his only dominant season came in 2011 in the lower run environment of the NL Central.

There’s a good chance that regression will work at least somewhat in Toronto’s favor in 2014, after a talented team saw so many things go wrong in 2013. The Blue Jays better hope so, because with exactly zero surefire aces available for this pitching-light club to sign, the Jays are going to need some good fortune.

It’s possible. While we’ve heard the Diamondbacks, Dodgers, Jays, Mariners, Pirates, Rangers, and other clubs come up in rumors, Tampa Bay’s asking price for its star lefty will surely be sky-high. He’s the best pitcher available this winter, and the best by far if Masahiro Tanaka doesn’t post. One could argue that the Rays should get more for Price than they got for James Shields last winter, because Price has a better track record than Shields did. But this assumes that there’s a team out there as motivated to strip the farm system to land an established starter as the Royals were last year when they dealt Wil Myers. The Royals had a general manager on the hot seat, zero winning seasons in a decade, and zero playoff berths in nearly three decades.

The Rays might be able to pull that off again. Arizona’s Kevin Towers is a gunslinger of a general manager who wants a no. 1 starter and has enough young talent on hand to put together a strong offer. The Mariners have already pushed many of their chips into the center of the table to sign Robinson Cano; given this weekend’s revelations about the team’s dysfunctional brass, a Price trade would spark a well-timed narrative shift and provide a big addition to the pitching staff. Mariners pitching prospect Taijuan Walker has popped up in most rumors, and Peter Gammons has reported that the Rays would want Seattle shortstop Brad Miller, not rumored trade chip Nick Franklin.

Still, Tampa Bay is one power bat (Corey Hart?) away from emerging as a strong contender for 2014. If the Rays are going to trade Price, they’re going to want a huge return. If no team is willing to meet that standard, there are worse fates than going into next season with a former Cy Young winner heading the rotation.

4. What’s Up With Masahiro Tanaka?

Tanaka is the closest thing to an ace who might be acquirable without making a trade, but the 25-year-old right-hander’s status is in limbo. The new posting system proposed by Major League Baseball would cap the bids on players posted by Nippon Professional Baseball players at $20 million. That leaves Tanaka’s current employer, the Rakuten Golden Eagles, in a bind.

Exclusive negotiating rights for Tanaka would surely run for way more than $20 million under the current system. With that limit potentially kicking in, though, Rakuten needs to decide if it would rather keep Tanaka for at least one of his remaining two years of controllable NPB service time or risk losing him for nothing if Tanaka simply waits out those two years, then seeks a new deal on the open market.

Even though MLB teams are flush with new TV-deal cash, both money and time still matter. The longer MLB and NPB haggle over details and Rakuten considers its options, the fewer teams will likely be in the running if Tanaka does in fact post this winter, since several clubs might have used up all or most of their budget space by then. Teams like the Angels, Cubs, and Yankees (and maybe those Jays), which have big revenue streams and glaring pitching needs, might jump in even if the MLB/NPB/Tanaka impasse stretches into 2014. The fact that Tanaka would be free to choose which team to negotiate with if the new system takes effect and multiple teams bid the max $20 million only adds intrigue to the equation.

Here are some semi-educated predictions:

• Mark Trumbo either won’t get traded or will get traded for a disappointing return. The Angels might think they have a top-notch trade chip given that Trumbo has averaged 32 homers per year in his first three full big league seasons, but few major league teams are keen on players with .299 career on-base percentages. Here’s Exhibit A … and here’s Exhibit B.

• Brett Anderson will be traded, and he’s going to be a good buy for the team that gets him. There are ample injury risks that we can’t ignore, but many teams are recognizing that Boston’s 2013 approach of avoiding very long contracts offers more flexibility and less risk than the alternative. A team that acquires Anderson would be on the hook for only the $8 million option it would presumably pick up for 2014, plus either a $12 million option or $1.5 million buyout for 2015. The Jays, Yankees, and Orioles head the list of good fits.

• Nelson Cruz is going to disappoint whichever team lands him. There are just too many red flags here: He has topped 128 games just once, plays miserable outfield defense, brings shaky on-base skills, and will surely see a drop in power once he leaves hitter-friendly Texas. He’s 33, and it’s going to take a lot of years and a lot of dollars to land him. No thanks.

• Shin-Soo Choo will sign with Detroit or Texas. Neither team’s offseason actions make sense unless a big acquisition comes next. In the Tigers’ case, signing Choo and then mounting a full-court press to lock up Max Scherzer would help close the loop on what currently looks like a puzzling and incomplete set of winter moves.

It should be a fun week. Stay tuned.