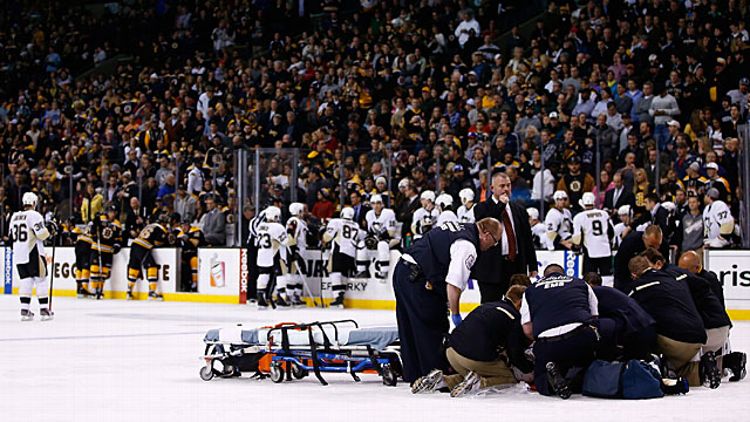 The weekend included plenty of important games and individual highlights. But those won’t be the focus today, because as seems to be the case a few times every season, the hockey world is instead left reflecting on yet another scary incident of needless violence.

This time it came in Saturday’s game between the Penguins and Bruins. The teams have a long history with each other, and their recent matchups have featured plenty of bad blood. But Saturday’s game went well beyond that, and it left both teams facing down injuries and suspensions.

The lowlight was Shawn Thornton’s outright assault on Pittsburgh defenseman Brooks Orpik midway through the first period. The Bruins tough guy grabbed Orpik from behind, slew-footed him to the ice, then delivered a series of punches to his defenseless opponent. The attack knocked Orpik out cold, and he was eventually stretchered off the ice.

Thornton was targeting Orpik after the Penguins defenseman had KO’d Boston’s Loui Eriksson with an open-ice hit on the game’s first shift. The hit was a shoulder into the chest and wasn’t penalized, though it was hard to tell if Eriksson had actually played the puck prior to contact. Thornton had tried challenging Orpik to fight, and when the invitation was refused he apparently decided he’d just have to jump him.

After the game, an emotional Thornton expressed regret. Earlier in the week, he had told ESPN.com that “People could probably criticize that I’m a little too honorable, I suppose, in some instances … If you’re one of those guys that suckers someone when they’re down or you go after somebody that doesn’t deserve it or isn’t the same category as you, that will come back and bite you at some point, too.” The quote sounds awful now, but he wasn’t necessarily wrong. Thornton has been one of the league’s more respected enforcers, in part due to his ability to actually play a little in between fights. That’s a reputation he was obviously proud of, but he’ll have to rebuild it from scratch.

The Orpik incident wasn’t the only ugly moment from a game so vicious that a slash that resulted in a broken ankle was treated as a virtual afterthought. Seconds before Thornton’s attack, Penguins winger James Neal appeared to intentionally knee Boston’s Brad Marchand in the side of the head while he was down on the ice. Although the result wasn’t as significant — Marchand was able to finish the game — you could argue that the act itself was every bit as bad as Thornton’s, if not worse. The NHL apparently doesn’t see it that way, though, as they’ve suspended Neal for just five games.

Thornton won’t be so lucky. He’s been invited to an in-person hearing, meaning he’s likely getting the book thrown at him. Anything less than a double-digit suspension would be a surprise, and it will be well deserved despite the usual efforts to blame the victim. (If Oprik had just dropped the gloves, the thinking goes, Thornton wouldn’t have had to sucker him.)

In the meantime, prepare for another week’s worth of debate over “The Code” and fighting’s place in the NHL, with the usual suspects on each side trotting out the same arguments they turn to every time something like this happens. For a league that insists the players can police themselves, the NHL sure gives us all plenty of opportunity to practice this tired dance.

The Bruins held on for a 3-2 win, not that anyone noticed.

The Islanders snapped a five-year playoff drought last spring, and they felt like a team on the rise heading into this season. New York started slowly, going just 4-4-3 through October 27. But that was good enough for second place in the Metropolitan, and, sensing an opportunity, the team pulled the trigger on a deal to acquire Thomas Vanek from the Sabres for Matt Moulson, their 2014 first-round pick, and a 2015 second.

Vanek has played as well as could be expected — he had four goals and five assists in his 13 games with the Sabres at the time of the deal, and he put up identical numbers in his first 13 with New York. But the deal has failed to improve the Islanders, who have been every bit as bad as the Sabres since it was made. They’ve lost nine straight and sit at 8-17-5, good for dead last in the Metro and 29th overall. It’s gotten so bad that the team is now holding the dreaded closed-door meeting after losses.

While disasters of this scale are always a team effort, it’s not hard to zero in on the Islanders’ key weakness: Their goaltending is awful. All three goalies who’ve started games have goals-against averages above 3.00 and save percentages south of .900. That’s unacceptable in today’s league, and it has led some to wonder why they didn’t target Buffalo’s Ryan Miller instead of Vanek. General manager Garth Snow is apparently working the trade lines now, but it may be too late to save this season.

It’s not all bad news. For one, Snow was at least smart enough to protect the 2014 first-rounder he sent to the Sabres, so the Isles won’t have to worry about dealing away a potential top-two pick. And they could always start moving out veterans, including Vanek himself, who’d probably bring back a package that was almost as good as the one they gave up for him.

But that can’t be an especially enticing option for a team that’s essentially been in rebuild mode for two decades. This was supposed to be the year all that patience finally started to pay off. Taking yet another step back would be hard to swallow, especially for a team that’s been blessed with an elite franchise player in John Tavares. How many of his prime years are the Islanders willing to waste while they hit the reset button yet again?

It sure won’t get any easier this week, as the team heads out on the road for a three-game Western swing that will see them visit the Ducks, Sharks, and Coyotes. If they can’t manage a few wins, don’t be surprised if they come back home with a new coach.

Jets Still Waiting to Take Off

We haven’t spent much time talking about the Winnipeg Jets in this space, because for most of the season there just hasn’t been much to talk about.

They’re certainly not a good team, winning just 14 out of 31 games and sitting five points back of a playoff spot. But they’re also not bad enough to be lumped in with the league’s true disasters, so there’s not much rubbernecking value. They’re headed for a year of missing the playoffs and landing a good-but-not-great draft pick. In other words, it’s business as usual. When they’re not having their helmets stolen (and then ruining their fans’ plans to have some fun with it), you could be excused for not thinking much about the Jets at all.

Then again, you have that luxury because your job doesn’t involve watching and reporting on this team every day. No such luck for Winnipeg Free Press writer Gary Lawless, who on Saturday ripped into the franchise with a scathing column attacking everything from the dressing room to the front office.

Lawless singled out the team’s core, most of whom are leftovers from the Atlanta Thrasher days. While they’re all good players, Lawless argued that they’re too comfortable, calling them “a clubby set where calling one another out is forbidden.” He even invoked a comparison to the 2008 Maple Leafs’ “Muskoka Five,” which, as a Leafs fan, I can assure you is not a compliment.

The Jets will need to put together a string of wins to get back into playoff contention. They took the first step down that road Saturday, earning a 2-1 overtime win in Tampa on Mark Scheifele’s winner. That closed out a six-game road trip on which they earned a respectable eight of 12 points. They’ll play the next three at home against the Blues, Avalanche, and Stars — three teams they’re chasing in the Central.

• The Bruins beat the Maple Leafs, 5-2, on Sunday night. That snapped a streak for the Leafs in which they won twice despite becoming just the third team in 25 years to give up 50 shots in back-to-back games. For most teams, giving up that many shots is a disaster. For the Leafs, it sometimes seems to be the only way they can win. Toronto faces the Kings on Wednesday, and will likely be without captain Dion Phaneuf, who’s facing suspension for his hit from behind on Boston’s Kevan Miller.

• The Flyers’ charge toward a playoff spot has slowed lately, including a 5-1 loss to the Stars on Saturday. They’ve also learned that they’ll be without leading goal scorer Vincent Lecavalier for up to a month because of a back injury.

• The Blackhawks beat the Panthers on Sunday to snap a three-game losing streak, but they lost goaltender Corey Crawford to a lower-body injury. There’s no word yet as to how long he may be out.

• In their last two games, the Oilers beat the Avalanche, 8-2, and then lost, 2-1, to the Flames, just in case anyone was worried they were starting to figure this team out.

• Speaking of the Avs, they lost, 3-1, to Vancouver on Sunday night and are now just three points up on the final Western playoff spot. They play four of their next six against non-playoff teams.

• The Canucks have now won four straight and passed the Coyotes for fourth place in the Pacific, though the Coyotes have three games in hand. Vancouver will face Carolina tonight in a battle between two of the league’s hottest teams.

• The Hurricanes have won three straight to climb back into the playoff hunt, including a 5-3 win over San Jose on Friday that was just the Sharks’ fifth regulation loss of the year. They added their sixth on Sunday when they dropped a 3-1 decision to the Wild.

• Those San Jose losses opened the door for the Ducks to claim the top spot in the Pacific with a 5-2 win over the Blues on Saturday. Anaheim is now two points up on San Jose, though the Sharks hold two games in hand.

• The Senators have lost four of their last five, and they haven’t won two consecutive games in a month. They’ll have a decent chance to snap that streak this week when they play a home-and-home with the last-place Sabres.

• Finally, the Rangers had a rough weekend, dropping games to the Devils and Capitals. They also appear to have lost All-Star defenseman Marc Staal to injury after he took a hit to the jaw Saturday. Staal has missed significant time in each of the last two seasons, and initial fears are that he may have suffered another concussion.

Kobe Comes Back, and the NBA's Crazy Uncle Is Home Again