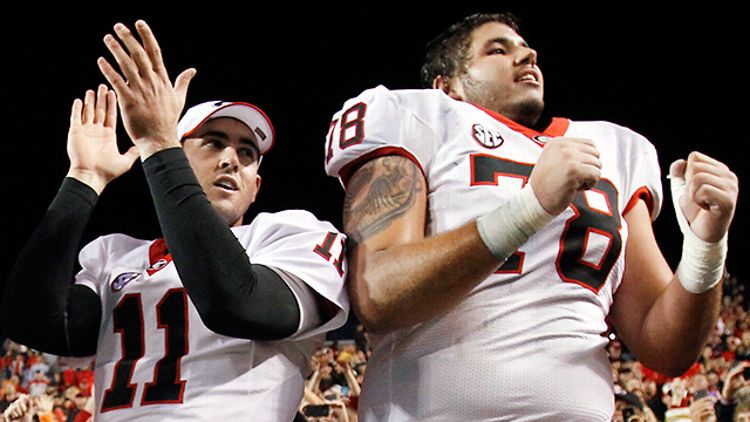 Who Is He? Georgia offensive lineman Watts Dantzler.

Where Is He From? Dalton, Georgia

Years Played: He’s currently in his third year of activity with the Bulldogs.

Follow the Bouncing Ball: Listed as a guard, he’s had experience just about everywhere along the line. A standout personality for the red and black ever since his signing-day announcement, Dantzler appeared in three games in 2011 and six in ’12. This year, with Georgia returning its entire complement of O-line starters from last season, Dantzler has seen playing time as a reserve in all three contests.

His Game in 25 Words or Fewer: Versatile. Musical. Developing. Rhythmic.

Best Highlight: It’s not, technically speaking, a game footage highlight, but if you haven’t seen Dantzler and friends in this outtakes collection from Aaron Murray’s trick-shot video, you’re missing out on one of the most gut-busting delights of this past offseason:

Social Media Presence: Dude is everywhere, with an active offseason presence on YouTube and year-round good times on Instagram. It’s his Twitter account, however, that makes Dantzler a social media star on the rise:

Does anyone know when Georgia plays today? I sure hope they win

Should We Know Him? Indubitably. You might be wondering why we’re profiling a reserve offensive lineman in this space. We have our reasons. Some of them are practical: no. 9 Georgia hosts no. 6 LSU this Saturday in Athens — see this week’s Viewing Guide for more on Week 5’s marquee matchup — and the Bulldogs are going to need contributions from plenty of large, smashy gentlemen in order to reach a satisfactory middle ground between the 310 yards per game the Tigers’ defense is currently allowing and the 574 yards of offense per game the Dawgs have been amassing.

Some of our reasons are sentimental: We count several former offensive line toilers among our friends and family, and they are all excellent human beings.

Some other reasons are philosophical: Playing O-line requires a good set of brains along with bruiser strength, and too often these guys don’t get their due when it’s time to break down the keys to victory. Their stats don’t show up in the average box score. Plus, they’re single-handedly (well, two-handedly) propping up America’s chicken wing economic sector, and that kind of dedication to a cause shouldn’t go unheralded, consarnit.

Mostly, though, our reasons are patriotic:

This is what I say to Tornados pic.twitter.com/T6KL8pA0

Grantland NFL Podcast: The Struggling Rams, the Resurgent Niners, and the Week 4 Preview