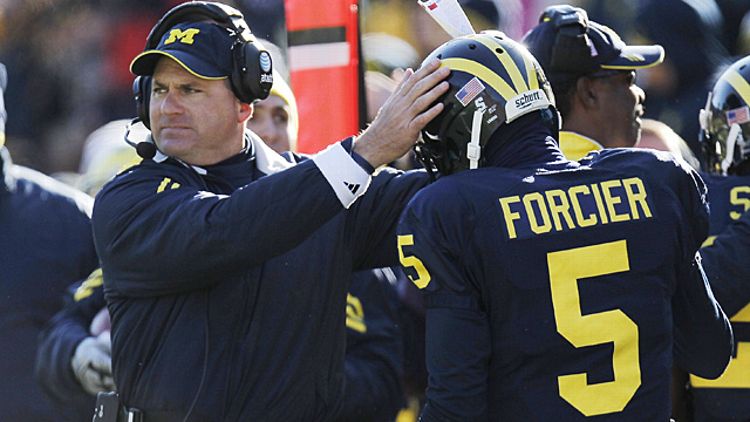 There’s no shame in transferring from one college to another. There is, however, usually lots of shame behind that decision. You know how this typically goes down. There’s the guy blindsided by classes that require more academic effort than half-heartedly slapping together dioramas based on the exploits of George Washington Carver. Or, there’s the guy who went to the same university as his high school girlfriend and later had to deal with the indignity of her hooking up with the RA. Or, that same RA lied to the dude after he downed a bottle of Goldschläger to drown his sorrows and said, “Everyone’s gonna forget about you singing ‘Fake Plastic Trees’ at the top of your lungs while crying naked in the hallway.”

Obviously, it’s bad enough when you gotta break the news to your parents, after they bought a bunch of sweatshirts and put that decal on their car and everything. Now just imagine you’re a top quarterback recruit; your decision to enroll in a certain school was met with months-long national scrutiny and you probably screwed some people over in the process. No one wants to see you succeed, especially if you’re a dude like Gunner Kiel, who I’m assuming is a total dick because his name is Gunner Kiel. Also, because he was last year’s no. 1 QB recruit, who eventually chose Notre Dame after spurning LSU and getting his manhood questioned by Les Miles. And, even more notoriously, he bypassed the chance to be Indiana’s answer to Tim Couch, the homegrown hero leading a beleaguered, basketball-mad program to the dizzying heights of an Outback Bowl bid.

Seriously, we wish Kiel all the success in the world. But if we’re looking at the recent trend of blue-chip QB transfers, the odds aren’t in his favor. Here are the most recent examples, and they don’t appear as if they’re individual pitfalls to avoid so much as a supermassive black hole.

Though one of the most celebrated recruits in a typically stacked class, Sims struggled in limited playing time at Alabama, and eventually lost the starting gig to A.J. McCarron, a guy whose “I will not lose” track record, model girlfriend, and last name that rhymes with “McLaren” will inevitably get him namedropped on a Jay-Z track at some point. Now, you could view Sims’s subsequent transfer to his home state of Virginia as the path of least resistance. Or, you could assume that he realized the only thing worse than having to wish injury on the most successful quarterback in Alabama history (to get on the playing field) is having to replace him. Needless to say, it’s preferable to take your snaps at a place where people still have fond memories of Aaron Brooks. You want your quarterback to be the ultimate competitor, but you also would prefer them to be rational.

You can’t blame Gabbert for hightailing it out of Columbia; for one thing, it was only two years ago that “he’s no Blaine Gabbert” was meant as something of an insult, so standing in the shadow of his brother (not to mention James Franklin) could appear a little too daunting. Moreover, Missouri was quickly establishing itself as a producer of “system quarterbacks” ill-prepared for the rigors of the NFL. One could argue Brad Smith is seen as a better quarterback around the league than Blaine Gabbert, largely because he still leaves something to the imagination.

After decommitting from Nebraska, staying long enough at Mizzou to get his nose broken in an altercation at Gumby’s Pizza (which really is as long as anyone needs to stay at any college), and a brief, Bobby Petrino–length stopover in Louisville, Tyler has settled in at Central Florida, which is something of a canny move. Sure, it’s the Big East and Central Florida’s football tradition mostly evokes hushed awe via phrases like “Daunte Culpepper,” “George O’Leary,” and “Beef ‘O’ Brady’s Bowl,” but even if 10 percent of the nation’s second-largest university cares, he might be playing in front of bigger crowds in the state of Florida than his brother.

Both took a bold step by signing with a religiously affiliated school, took their lumps, never realized their potential before their program slunk into mediocrity, and then somehow ended up at Kansas to play out the string. There is a major difference in that Heaps’s knees don’t currently resemble a mound of pulled pork, but boy … I didn’t think “next Dayne Crist” could be a thing.

This appears to be the only guy on this list who clearly made the right decision, but even the Dodgers are skeptical. Or, perhaps it’s more indicative of what those “A Whole New Blue” billboards are suggesting about the culture of the free-spending Dodgers when the team’s own website questioned whether a guaranteed $5.25 million was more tempting than theoretical sex with Katherine Webb.

You knew this one would end badly: in terms of dubious quarterbacking “dynasties,” the Forciers are pretty much a less-fun version of the Clausens. Tate was put under the tutelage of none other than Marv Marinovich as early as third grade. Which is like allowing your son to be managed by Joe Jackson because you like the way Tito turned out.

Forcier’s freshman season at Michigan was indeed a memorable one, but soon forgotten as he was demoted to third string behind the ascendant Denard Robinson and Devin Gardner, and faced the indignity of being called out by Matt Millen for sulking during the first game of the 2010 season. He toughed out the Big Ten season before being deemed academically ineligible for the Gator Bowl, after which he announced his decision to transfer to a list of schools that included South Carolina State and Florida A&M, which in some ways, make a lot of sense for a self-loathing, self-destructive white boy. He actually agreed to a financial aid package with Miami but never enrolled, before ending up at San Jose State, where he never played. His star-crossed college football career resembles Robert Marve’s only with a complete disdain for classwork rather than a bizarre injury history.

Last we heard, Forcier ended up as the third-string quarterback for the Hamilton Tiger-Cats before being released, which at the very least lets you know a CFL team is more likely to carry three quarterbacks than their American counterparts. Quite a legacy.

Garrett Gilbert won’t be remembered along the same lines as Korleone Young, but all the same, he did serve something as proof of why his particular sport has its rules about who can go pro and who can’t. Sent into the 2009 BCS Championship game against Alabama after Colt McCoy got blowed up but good, the true freshman committed five turnovers and was actually praised for how he performed under the circumstances.

The next two years found Gilbert mired in a QB competition with a bunch of dudes with interchangeably ultra-Texan names (David Ash, Case McCoy, Connor Wood), and after shoulder surgery shelved him for most of the 2011 season, he was granted his release. Texas hasn’t exactly had Vince Young, Major Applewhite, or even Chris Simms walk through the door ever since and yet, you don’t get the sense Gilbert has made anyone in Austin feel nostalgic. It’s hard to tell what makes him seem less prepared for the rigors of the real world: a shaky performance in June Jones’s run-and-shoot offense at SMU or a degree in “Physical Culture and Sports” from UT.

Where Would the USMNT Finish in the Champions League Group Stage?