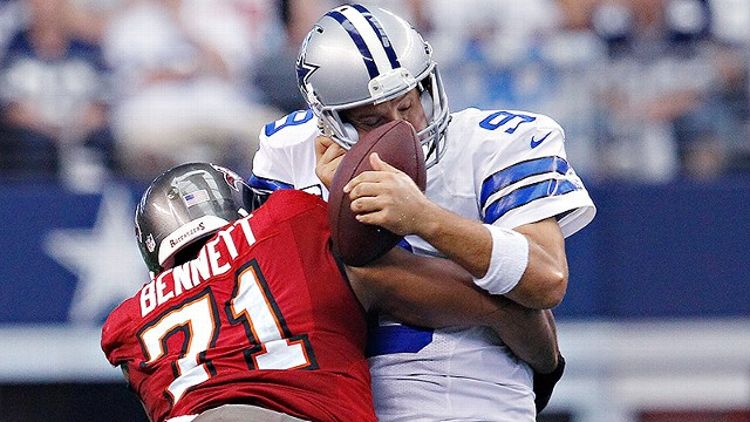 Anyone in my life can tell you that I have a serious problem when it comes to Fear of Missing Out. I could be off having a good time — a great time — but the moment I hear that something else is happening somewhere else, the fear begins to creep in. Uh-oh, is that more fun than this? Nah. Wait … is it? It’s exhausting. This crippling dread manifests most fully in three areas: two or more of my friends attending a live music event, second-Thursday-of-the-month night at Wrightwood Tap in Chicago, and NFL free agency.

For the most part, I, as a Bears fan, should be happy with what’s gone down this week. Tight end Martellus Bennett was the best player available at a position of dire need, and although opinions are split about the money given to left tackle Jermon Bushrod (not really — most people think he got way too much money), two things about the signing are undeniable — the Bears now have another starting-caliber tackle in the fold, and GM Phil Emery now has infinitely more flexibility in the draft’s first round.

With both deals getting done in the first few hours of free agency, I should’ve been able to take the rest of the week off — give the refresh button on my browser a break and let other teams and fans open their new toys. Sadly, because I suffer from sports anhedonia, that just wasn’t an option. I watched with bitter jealousy as other teams cheaply picked off players I wanted or enjoy watching, and by this morning, that feeling had mostly enveloped any joy I’d taken earlier in the week. So I figured I might as well share my pain and lay out the fan bases that have garnered most of my jealousy.

This is the obvious one, but for me, it has nothing to do with Percy Harvin or Cliff Avril. It has everything to do with Michael Bennett. Avril got the bigger deal (not by a lot), but for my money, Bennett is the better player. Reputations for defensive ends are mostly built on sacks, but that total tells so little of the story. Bennett had nine sacks last season for Tampa Bay, but he was ninth among all defensive players in total pressures, according to Pro Football Focus.

His ability to get after the quarterback is matched, or even exceeded, by his abilities against the run. Whether it’s chasing down plays from the back side or holding up at the point of attack, Bennett is excellent at making plays in the run game as a defensive end. Tampa Bay’s reason for letting him walk is their hope that Da’Quan Bowers can turn into a star. It’s not a reason I agree with, but at least it’s a reason. What excuses do the other 30 teams have? Bennett’s contract in Seattle is for one year and $5 million. I’ve got to imagine some pass-rush needy teams had that lying around, especially in a world where Erik Walden is making $16 million over four years.

The Seahawks now have a roster featuring Avril, Bennett, Bruce Irvin, and Chris Clemons. Bennett already has a lot of experience sliding inside during passing situations, and it’s likely Seattle will do everything it can to get as many of those four on the field together as possible. I hope teams are excited about that. Actually, ya know what, I don’t care. You brought this on yourself, NFL.

The jealousy I have for the Chiefs has more to do with a combination of factors than just the team’s free-agent haul. Kansas City seems the classic case of a team with a decent amount of talent that desperately needed changes at head coach and quarterback. The Chiefs have a lot of talent on the defensive side of the ball — mostly with both of their edge rushers — and Alex Smith should help them get to at least a passable level on offense.

Branden Albert doesn’t seem too happy about the idea of moving to the right side following Eric Winston’s release, but this year, playing on the franchise tag, he probably doesn’t have much of a choice. Kansas City will likely use the first overall pick on Luke Joeckel or Eric Fisher, both of whom are considered Pro Bowl–caliber left tackles. Add recently signed Geoff Schwartz to the lineup — a guy who performed well in a limited role in Minnesota last year and deserved a chance to start somewhere — with Smith, Dwayne Bowe, and Jamaal Charles, and the Chiefs could be looking at the playoffs just a year after finishing with the worst record in football.

It’s a pretty fascinating time of change in Philadelphia. The three big signings from the dream offseason — Jason Babin, Nnamdi Asomugha, and Cullen Jenkins — are all gone, and the Eagles have spent this free-agency period making a series of lower-profile choices that should probably be celebrated.

Kenny Phillips, while an injury risk, is a game-changing player when healthy. The Eagles were a mess at both cornerback and safety last year, and although I think Cary Williams might be the Trevor Ariza of last year’s playoffs, the Phillips deal seems like it provides little risk. Having someone who can make plays as a center fielder is a huge part of the direction the NFL is moving, and it seems Phillips’s instincts in that role transcend the questions about his health.

Another Eagles deal that’s more intriguing than anything else is the money given to former Texans fullback–tight end James Casey. I recall being at the combine the year Casey came out of Rice, and even then, there was a lot of talk about the different positions he’d be able to play given his skills. He played mostly fullback for the Texans last year, but I expect Chip Kelly to find more than a few ways to use him in the revamped Philly offense. He has the chance to be an Aaron Hernandez–type player.

I don’t know how economically prudent it is, but I’m going to enjoy Steven Jackson’s time in Atlanta. It speaks to the way Jackson went about his business in St. Louis that just about every Rams fan I knew was happy to see him sign up with a contender yesterday. Few players of this era have been stuck in worse situations than Jackson, and he’s still put together a remarkable career. For his sake, I hope there’s enough left in the tank for him to make a one- or two-year impact for the Falcons. Unlike Michael Turner, Jackson fits into Atlanta’s new pass-happy system, and he should be able to provide some help out of the backfield as well as handle his normal load on the ground.