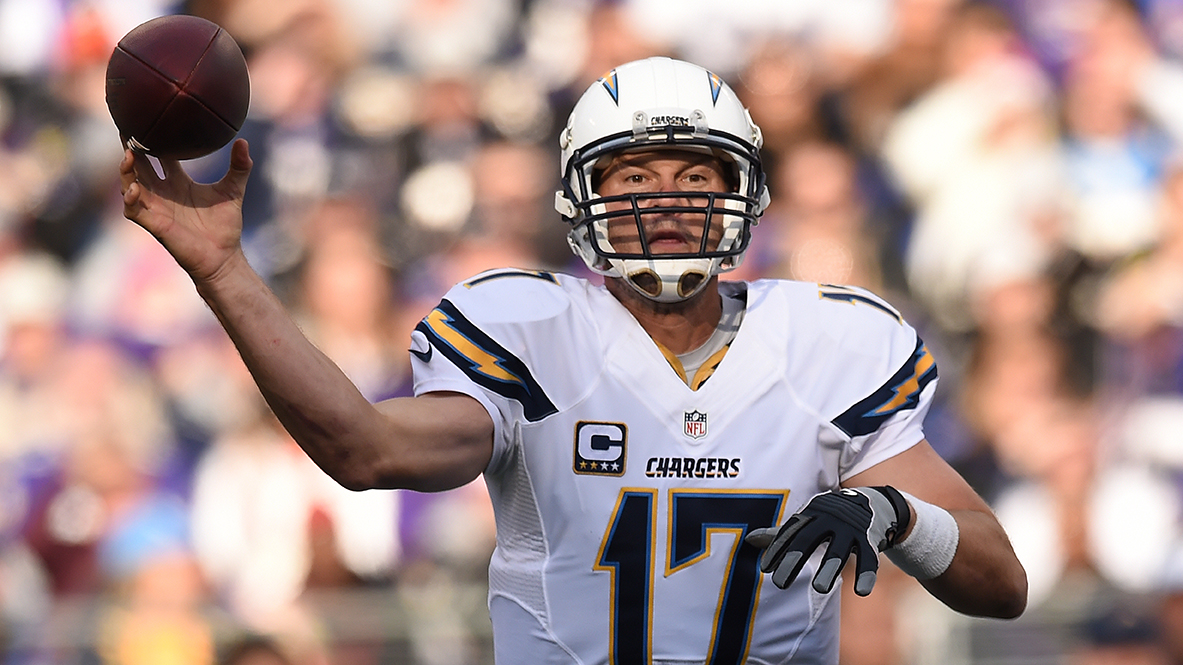 Yesterday was full of games that further shuffled the AFC wild-card race, but San Diego’s trip to Baltimore was the only one featuring two teams currently mired in it. A Chargers loss would have been San Diego’s third to a team jostling for a playoff spot in the AFC — the other two being the Chiefs and Dolphins. That would have meant yet another team would have that precious head-to-head win that makes every other complicating factor in determining playoff spots irrelevant.

The Chargers won’t have to deal with this scenario now. Philip Rivers and Keenan Allen made it obsolete during a blistering fourth quarter that saw 21 Chargers points on three necessary touchdown drives. Early yesterday, it looked like the problems that had doomed San Diego as of late would fell them again against a scary Baltimore front seven. In what initially seemed like the beginning of a long day of pressure on Rivers, Elvis Dumervil just caught the quarterback’s arm as he let go of a first-quarter pass, causing the ball to fall into Daryl Smith’s arms barely five yards past the line of scrimmage.

Protection has been the Chargers’ downfall during this season’s second act — as of yesterday, they’re on center no. 5. To combat the Baltimore pass rush, Mike McCoy and offensive coordinator Frank Reich did something counterintuitive. They kept fewer players in to block. By trotting out four to five receivers, often going empty in the backfield, Rivers had plenty of options, and he was free to get the ball out quickly. The result was the best game San Diego’s offense has had in more than a month — 383 yards and three scores for Rivers — against what’s still a very good defense. 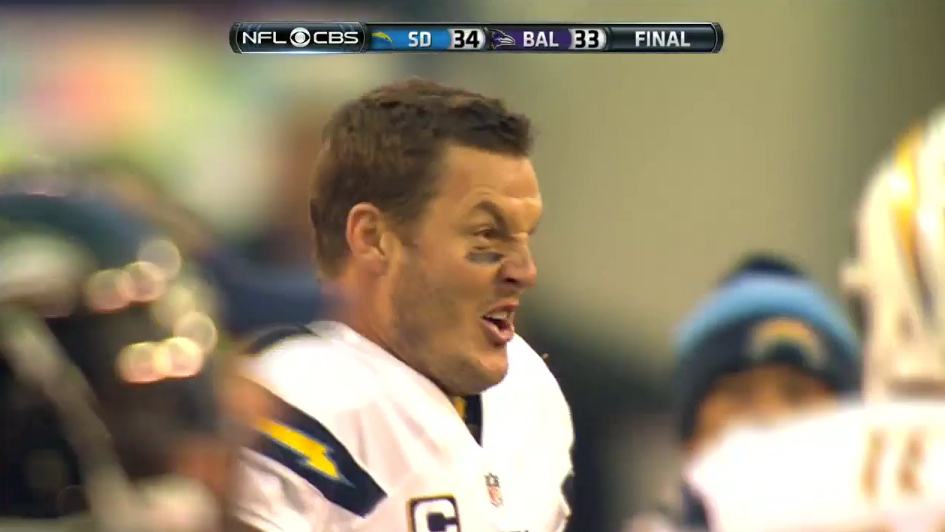 The touchdown throw to Eddie Royal on San Diego’s excellent final drive pushed the Chargers to 8-4, while Kansas City, Pittsburgh, Cleveland, and, obviously, Baltimore, all added one to the loss column. It’s a win that means two things: We get an all-time Rivers Face, and the Chargers are firmly in control of the wild-card hunt. They may not be there for long, not with a Patriots-Broncos-49ers-Chiefs stretch looming, but thanks to Rivers playing like he did early in the season, the Chargers are 12 games in and control their playoff future. That’s all they can ask for. 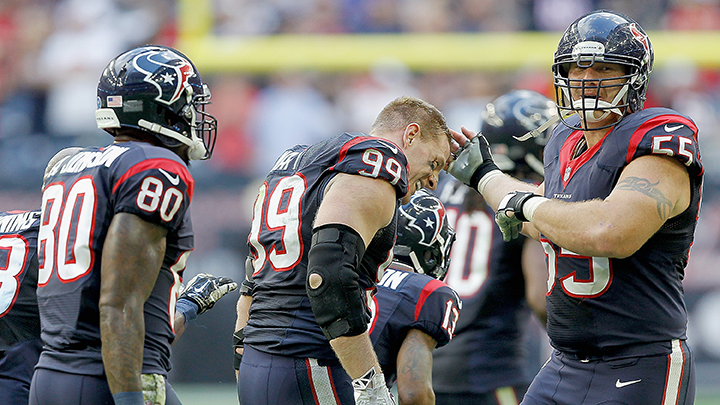 The Texans’ 45-21 romp over the Titans is our weekly and eternal reminder that fantasy football is dumb. Houston has been among the league’s most run-heavy teams all season; no team in football defends the run worse than the Titans. So of course Ryan Fitzpatrick put together the best game of his career: 24-of-33 for 358 yards and six freaking touchdowns.

It was all worth it to see his son pull some Beautiful Mind shit in the postgame interview and to be reminded that we can make all the beard and interception jokes we want: Ryan Fitzpatrick is still a dude who’s made more than $25 million playing football and has an econ degree from Harvard.

We have to mention DeAndre Hopkins here. He has been great all year despite poor play from his quarterbacks and being stuck in an offense allergic to passing. He had a career day, with 238 yards and two scores on just nine targets. The guy catches anything thrown in his zip code.

After the game, though, Hopkins was busy singing the praises of another Texans pass-catcher. Hopkins said J.J. Watt has proven he’s the league MVP, “hands down,” according to ESPN’s Tania Ganguli. It was another ridiculous day for Watt, who hauled in another goal-line touchdown catch just a few plays after a strip-sack of Jake Locker that he recovered himself. An MVP for Watt this year would be the NFL version of the NBA MVP handed to Kobe Bryant in 2008. Kevin Garnett was probably the deserving winner, much like Aaron Rodgers this year. But voters were making up for the sins they’d committed in 2006. Even if Watt’s MVP takes a handful of touchdowns, happens two years too late, and comes at the expense of the rightful winner, I’m not sure anyone is going to complain.

This man is a wizard. He had another near-perfect day yesterday — 24-of-38, 368 yards, at least three throws that the physical laws of our universe can’t account for — while, at least temporarily, handing the Packers the Burger King crown given to the best team in football three-quarters of the way through the season. Some of the stats thrown out during and after the game don’t even seem real. It’s gotten to the point where I’d believe any random fact about his play at Lambeau. I’m pretty sure Rodgers hasn’t thrown an interception at home since Mike Holmgren was the Packers coach.

The Rams should formally request to be moved to the NFC South for the rest of the season. The 52-0 drubbing of the Raiders is eye-popping, but they’ve played well throughout the last month. Their 31-14 loss in Arizona included a few garbage-time touchdowns for the Cardinals defense, and the Chargers needed a miracle interception at the goal line last week to sneak out a 27-24 win. It’s impossible to know what the Rams are going to look like at the important spots six months from now — quarterback, head coach — but in their past few games, they’ve finally started to look like the sort of team some people expected coming into the season. 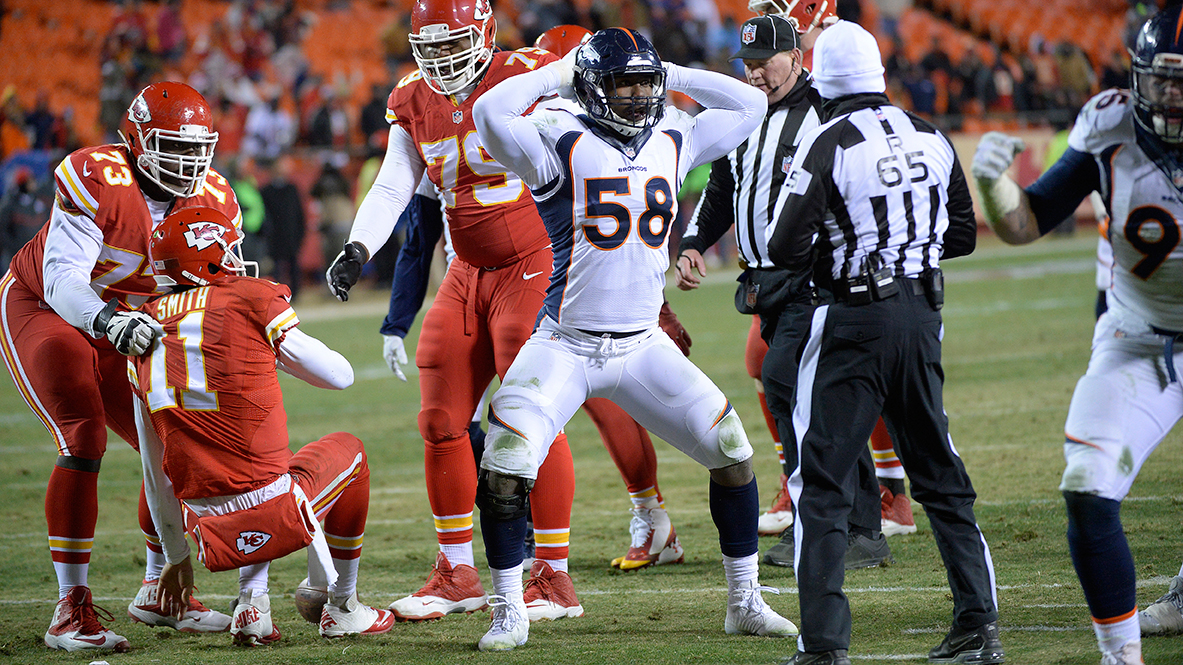 I’m in pain just thinking about how Alex Smith feels this morning. The Broncos sacked Smith six times last night, and hit him a total of 12 times. That’s a lot for any quarterback, but it’s even more ridiculous considering just how little Kansas City actually had the ball. The Chiefs ran only 44 plays, and 15 of those were runs. That means Smith got hit on 41 percent of his dropbacks.

Denver typically relies on four players to do most of its pass-rushing damage, but it clearly saw the success other teams have had in bringing extra pressure at Smith. When teams don’t blitz, Smith ranks an Alex Smith–like 20th in QBR, right about league average. When teams do blitz, his QBR drops from 62.8 to 25.9 — the fifth-worst mark in football. The Broncos knew they could get to Smith with the blitz, and they did, sending guys like Quinton Carter and Brandon Marshall to create some extra noise for a banged-up Kansas City offensive line.

Anyone who made a trip to the bathroom during the game in Indy missed at least two touchdowns. It’s not that the Colts put up a lot of points yesterday — they do that against plenty of teams. It’s that they scored them from everywhere on the field. Six of Indy’s touchdowns went for at least 30 yards — the first time that’s happened since 1966.

I get that T.Y. Hilton is occasionally going to rip off an 80-yard score, but he wasn’t even the one torching Washington. Coby Fleener had a 73-yard touchdown against what looked like air. Donte Moncrief bested that by six yards and also added a 48-yarder.

The quarterback situation has gotten most of the headlines in Washington, but the problems go much deeper. They ranked 31st in pass-defense DVOA before yesterday’s game, and they’ll probably be in the basement now. Quality defensive backs continue to be mythical creatures in Washington. Week 13 of his second season probably wasn’t a great day for David Amerson, last year’s second-round pick, to have the worst game of his career. 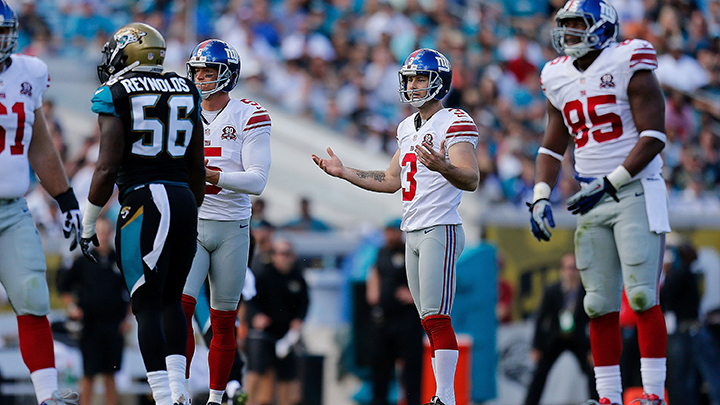 It’s about time we sit the Giants down and tell them how their behavior is affecting the people who love them. This has been an ugly year, but yesterday was rock bottom. With a 21-3 halftime lead against Jacksonville, it looked like New York may have taken the positives from a near win over the Cowboys last week and started playing like a vaguely competitive team down the stretch. But the second half was enough to spoil that idea.

The Giants managed just 75 total yards in the final two quarters as the Jaguars outscored them 22-3 to finish out New York’s worst loss in recent memory. It pushes the Giants’ losing streak to a mind-numbing seven games. The game included everything that’s come to define this Giants season. One game after coming off short-term IR, Geoff Schwartz left on a cart. Schwartz was brought in this offseason as the best guard in free agency, but he was playing right tackle yesterday, a spot vacated because of an injury to last year’s first-round pick, Justin Pugh. By the end of the game, Schwartz’s replacement, James Brewer, was also hurt. Fittingly, the Giants’ hopes ended on a sack-fumble late in the fourth quarter.

The losing streak began with a 27-0 clobbering in Philadelphia that was mostly a product of the Giants’ inability to keep Eli Manning off the dirt. Protection issues have torpedoed New York’s offense at times, but this is a roster with problems that go way beyond the offensive line. After starting the season reasonably strong on defense, the Giants have plummeted. They’re 28th in DVOA, and the only teams to not hit the 30-point mark against them in the past seven games are Jacksonville and San Francisco, whose offense is the football equivalent of a thousand Hindenburgs. It seems like the talk about Tom Coughlin’s future comes up every November, but while it’s usually just after Halloween, this time it’s just after Thanksgiving. And that could make all the difference.

It was a rough week all around for Arizona. Turnovers cost them, they had flubs on special teams, and Steven Jackson turned in the first 100-yard rushing game against the Cardinals all season. But no one had a worse afternoon than Peterson.

Julio Jones had a monster day — 10 catches for 189 yards and a touchdown — just a few days after Peterson brought up besting Jones during their LSU-Alabama showdowns. It was mostly harmless, but Peterson’s talk and Jones’s response are indicative of exactly what the Cardinals can’t afford down the stretch. Peterson was paid like the best cornerback in football this offseason because in many ways that’s what he’d been. Arizona had the league’s best DVOA against no. 1 receivers last year, with Peterson spending most of his time shadowing the other team’s best option. There’s been a slight drop-off this year— the Cardinals were eighth before yesterday — but for the most part, Arizona has done well slowing down what other passing offenses do best.

With Carson Palmer hurt and the run game DOA, the Cardinals defense is going to have to carry them to the playoffs. But if Arizona starts falling off in the places where it’s usually among the league’s best, there’s a chance it could go from chasing the no. 1 seed to falling out of the postseason entirely.