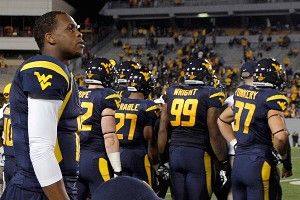 West Virginia lost their second game in two weeks on Saturday, falling to Kansas State, at home, 55-14. There were plenty of reasons behind the Mountaineers’ loss. A passing attack that usually operates with no regard for fire safety laws could not get any sparks flying, gaining only 155 yards in the air (a historic low for a Dana Holgorsen–coached offense). [Former] Heisman candidate Geno Smith threw two picks (his first of the season) and was totally unable to complete passes for more than 15 yards (he was 0-5), which certainly took the “raid” out of Holgo’s Air Raid offense. And, finally, the very movable object that was one of the FBS’s worst pass defenses ran into the unstoppable force that was (now legit) Heisman candidate Collin Klein, who passed for 323 yards and three touchdowns.

West Virginia has plenty of problems that might have contributed to their loss on Saturday, but the biggest factor might have been that Dana Holgorsen seems as enamored of frequent flier miles as he is with all-go, f-the-world receiver routes.

In the last two weeks (and change), West Virginia has traveled to and from Texas twice. On October 6 they played University of Texas, in Austin — a 1,400-mile trip, each way, from Morgantown. The following week, they returned to the Lone Star State to play Texas Tech in Lubbock. That’s another 1,400-plus miles on the odometer each way. That’s almost 3,000 miles. I’m not trying to be funny (I’m trying to be a little funny), but is it possible that the thing that killed the Air Raid is air travel?

Tavon Austin is not Nell. I’m sure he’s familiar with the vagaries of departures and arrivals. But West Virginia to Texas is a friggin’ jaunt. It’s not the same thing as going to Pittsburgh, Syracuse, or even Miami (schools WVU used to play when they were part of the Big East). It’s two and a half hours. And air travel comes with air-travel-type problems: poor blood circulation, muscle cramping, dehydration, getting your sleeping pattern thrown off, and lower pressure in your ears (this is particularly tough for the Mountaineers; they need to be able to hear Holgo scream “WOOOOOO!” after every play call).

Sidebar: Can you imagine being on a two-and-a-half-hour flight with Dana Holgorsen? What is that like? Does he screen a Malaysian bootleg DVD of The Master, introducing it by saying, “You guys … life, right?” Does he make a lot of announcements over the cabin PA system? Or a lot of announcements? Does he spend a majority of the flight banging on the cockpit door, imploring the pilot to spread the field and think with his heart? And when the air marshal tries to subdue him does he just keep insisting, “NO, I’M the air marshal”?

This could be the ultimate consequence of the great conference reshuffling of the last few years, and the utter disregard that reshuffling had for, you know, geography.

Worth thinking about. Also, think about this: The Klein-apple Express is actually a local. Kansas State is now 7-0 and has to be seriously considered as a team that could receive an Old Testament–style smiting by Alabama in the national championship game. , The Wildcats haven’t ventured very far from home. Their longest recent road trip was to Ames, to face Iowa State. When they visited West Virginia this weekend, they looked fresh, and they played within themselves. Maybe it’s because they had spent most of the season playing within their region. Kansas State hasn’t ventured much more than a train ride away from Manhattan. This could have something to do with head coach Bill Snyder’s preference for train travel, since he was there when it was invented. But it might just be smart program planning. Nobody said your away games had to be that far away. They say that to be a serious contender in college football, you have to go and win on the road (I don’t know who “they” are, but it really sounds like something they would say). Here’s the thing, though: Nobody said the road needed to be more than halfway across the country.