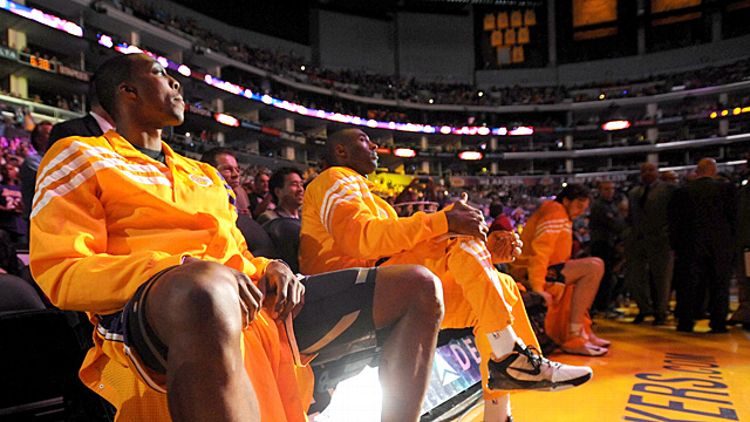 Two months wasn’t enough. Even with 72 days to picture these Lakers, there was no way to be ready for what came over the speakers Sunday at Staples Center. Pau Gasol, Kobe Bryant, Steve Nash, and Dwight Howard are in one place, and last night they were there for the first time. The excitement started midweek when it was announced that Howard’s debut might come against Sacramento, and it came to a climax just before the Lakers took the floor. When the first few bars of Van Halen’s “Right Now” kicked in, and the JumboTron flashed to the Staples Center hallway, the shot was fixed on Howard. People came out of their seats, and with a smile and a shove, Gasol pushed Howard forward to lead the Lakers onto the floor. Howard obliged, and as he jogged out onto the court, he did so alone. His teammates hanging back seemed part gag, part nod to the moment, but like he did often in the 15 or so minutes before tip-off, Howard smiled.

People stayed standing and phones stayed raised as the Lakers went through their warm-ups, and Howard threw himself more than a few one-handed alley-oops off the backboard, to the delight of just about everyone. Amid the Howard excitement, it was easy to forget that the point guard is also new in town, and he’s had his own share of luck throughout the years. The Lakers pushed the league’s new 90-second pregame limit to the brink as everyone high-fived everyone else, and finally, there they were, and it was something no amount of publicity photo sessions or stylized commercials could have mimicked.

It took all of a minute and 25 seconds for Howard’s first bucket — a lob from Gasol on the high post following some ballhandling work from Nash on the left wing that Howard flushed with two hands. His first stint on the floor went as might be expected. Howard’s teammates made a concerted effort to get him involved, and along with a dunk and a couple buckets, it was occasionally to their detriment. The mixed results on offense came with Howard changing shots and grabbing a couple rebounds on the other end, and overall, it looked like Dwight Howard was returning from injury, in a preseason game, while playing for a team in the midst of an offensive transition.

Howard’s first exit from the court was met with a standing ovation, and when he made his way to the end of the bench, the farthest chair from center court was fitted with an extra cushion. As Phil Jackson did before him, Howard and his bad back towered over the rest of the Lakers bench.

The reminder about Howard’s health was one of the few that pointed to L.A.’s possible issues. The Lakers’ bench warrants little excitement, and when Nash went down briefly in the fourth quarter, a moment of silent panic followed. Still, even in a 99-92 loss, the reasons for optimism far outweighed those for concern. With 2:58 left in the second quarter, Bryant found Howard for their first lob-dunk connection as Lakers, and by the end of the half Howard had managed 11 points and six rebounds in just less than 16 minutes. Frustration with the new Princeton offense was obvious at times — more than once in the second half, Pau and Kobe gestured at each other about missed cuts or late passes — but the signs about what L.A. can be on offense were there. The potential for the high-post game with Nash and Gasol, and Gasol and Howard, is endless.

The kinks were enough that the Kings stayed in it all night, and DeMarcus Cousins spent the fourth quarter displaying his trademark combination of skill and apathy. With 7:19 left in the fourth, the entire starting five were back in for the Lakers, and the fact that this game didn’t count seemed not to matter. Howard’s post-whistle incredulity was in mid-season form, and there were plenty of frustrated handclaps to go around. The outcome seemed to matter, even as most of Sacramento’s starters watched from their seats. With 2:15 left, Howard spun baseline for a Nash lob that gave the Lakers a 90-89 lead, but two Cousins finishes at the rim put Sacramento up one with 41 seconds left. Eventually down three and down to their final possession, everyone at Staples was reminded that no matter who’s on the roster, it’s Kobe Bryant’s team. One clanked 3 later, the game was over, and the full-strength Lakers were winless at Staples Center. Something tells me that won’t last long.