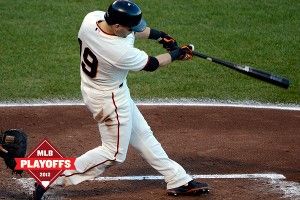 All right, that’s a small-sample-size-induced overreaction. Still, you have to wonder what’s going on with the Giants’ starting rotation, especially in this series. In the three starts made by Cain (2.79 ERA, 3.40 FIP, the team’s best starter this season), Madison Bumgarner (3.37 ERA, 3.50 FIP, the team’s second-best starter this season), and Tim Lincecum (two-time Cy Young winner who’s not nearly what he used to be, but still showed flashes of dominance pitching in relief during the playoffs), the Giants lost all three games, posting a combined starters’ ERA of 7.80. In the three starts made by Ryan Vogelsong (the team’s third-best starter) and Barry Zito (the Giants’ resident whipping boy by dint of his $126 million contract and years of mediocre or worse results), the Giants won all three games and delivered a 0.83 ERA.

After #RallyZito pulled off one of the most improbable playoff performances in years by shutting out the Cardinals over 7⅔ innings Friday night, Vogelsong came back for Game 6 and fired his second straight seven-inning, one-run start. Serenaded through the game with chants of “Vogey! Vogey!” the 35-year-old comeback kid dialed up his fastball all night, averaged 92 mph and humping up to 93-94 in the early innings, compared with his 2012 average of under 91. No big surprise, then, that Vogelsong set a new career high, striking out nine batters. You can see the entire Vogelsong highlight reel here; watch his strikeouts of Allen Craig and David Freese, both coming on nasty inside-tailing fastballs that tore two good right-handed hitters apart. If the Giants advance to the World Series and that offering’s still working, even Miguel Cabrera might not be able to do much against the suddenly dominant Vogelsong.

IF THE CARDINALS WANT TO PULL THIS SERIES OUT, THEY SHOULD PROBABLY STOP FIELDING LIKE A BEACHED WALRUS ON KETAMINE

The Cardinals allowed three more unearned runs in this game, giving them 10 for the series and setting a new all-time record for a League Championship Series.

All three of those unearned runs came in the second. Brandon Belt opened the inning by scalding a triple to right. Chris Carpenter then rallied back to strike out Gregor Blanco. Cardinals manager Mike Matheny then ordered Carpenter to intentionally walk Brandon Crawford, bringing up Vogelsong with runners on first and third and one out. Close your eyes and you can at least understand what Matheny was thinking. The intentional walk set up a potential double play. It also figured to put the Giants in a bad spot, forcing either a squeeze attempt everyone would know was coming, or one of those pointless sacrifice attempts that usually do little good and can do harm if the bunter doesn’t execute. But the risks involved with the intentional walk outweighed the rewards. For one thing, putting another runner on offered more RBI opportunities for Angel Pagan and the top of the order, assuming Vogelsong didn’t in fact hit into a double play. For another, it was always possible that Vogelsong could do something interesting with the bat. Giants manager Bruce Bochy had botched this bit of strategy in Game 3, ordering Cain to bunt in the same situation and ending up with nothing to show for it. This time, Vogelsong faked a bunt, pulled his bat back, and hit a chopper to an out-of-position Pete Kozma that led to an error, and ultimately to a huge, game-clinching inning.

Defense was the Cardinals’ Achilles heel this season, with St. Louis finishing 21st in Defensive Efficiency (the percentage of the time a team converts balls hit in play into outs), 23rd in Ultimate Zone Rating, and sure, let’s throw in tied for ninth in errors. Chris Carpenter deserves plenty of blame, posting the same line in Game 6 of the NLCS (four innings, five runs — two earned — on six hits and two walks) as he did in Game 2. Still, if you’re looking for a potential deciding factor in Game 7, particularly on what’s expected to be a wet night by the Bay, the Giants’ superior fielding may well play a role.

That’s the latest from ESPN’s Molly Knight, who tweeted that, after missing Game 6 with a bad back, Holliday felt even worse as the game went on. The Cardinals have gotten great mileage out of their role players through the playoffs and really throughout the season, with Matt Carpenter in particular a driving force on the Bus Squad (and also the player who would replace Holliday if he’s out again for Game 7). It’s also true that Holliday has been terrible in the NLDS and NLCS, hitting .190 with one extra-base hit, 10 strikeouts, and two walks since his big performance against the Braves in the wild-card play-in game. But we’re still talking about the Cardinals’ best hitter here. His absence would hurt.

OTHER GAME 7 TRENDS TO WATCH

• Much has been made about the Giants winning five straight elimination games, all of them coming in this year’s playoff. But as my Grantland partner in crime Rany Jazayerli notes, the Cardinals have won six straight elimination games. Five of those came on the road, including Albert Pujols’s spirit-crushing homer off Brad Lidge in Houston, Adam Wainwright’s knee-buckling, game-ending curve against Carlos Beltran and the Mets, and last year’s unforgettable Game 6.

• Marco Scutaro in 61 regular-season games after coming to the Giants in a deadline deal that cost virtually nothing: .362/.385/.473. Marco Scutaro during the NLCS: .450/.480/.583. Sure, much of that’s the result of luck on balls in play. But if Scutaro keeps this up, they’ll have to make room next to the Willie Mays statue for another bronze tribute.

About Last Weekend: Giants Give Cards the Bird