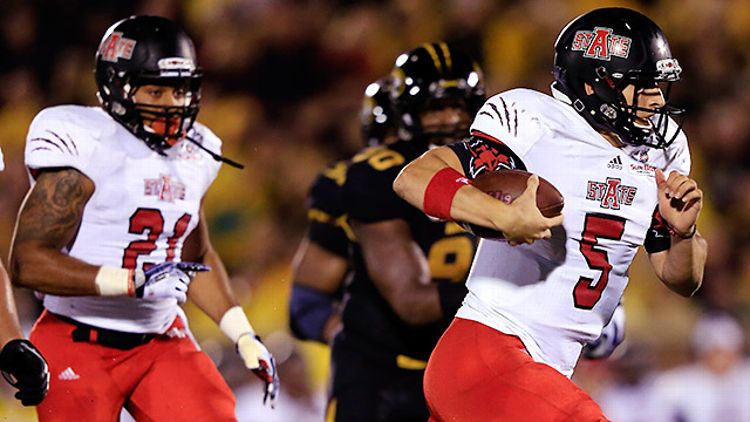 Beginning tonight, Week 9 will bless us with a nearly unbroken streak of college football, with games on Tuesday, Thursday, and Friday nights in advance of the main events on Saturday. We’re sure you have many questions. We’re here to help.

• College football? On MY Tuesday night? It’s more common than you think! So is this that MACtion I’ve heard so much about? MACtion must, by definition, involve the MAC. Week 9’s weeknight games feature teams from the Sun Belt, Conference USA, SEC, and Mountain West, plus an independent.

• What information do I, the discerning consumer, require in order to consume this game? The Ragin’ Cajuns and Red Wolves kick off on Tuesday night at 8 p.m. ET in Jonesboro. The game will be televised on ESPN2.

• What or whom should I watch? ASU quarterback Adam Kennedy, who tied the program’s single-game completions record versus Missouri, and receiver/return man J.D. McKissic, who scored the Red Wolves’ first kick return touchdown since 2001 in their last game, against Idaho. The Cajuns field the conference’s top rushing attack, led by Alonzo Harris and Elijah McGuire.

• What’s at stake here? Sole control of the Sun Belt, for as long as the winner keeps winning. The Ragin’ Cajuns and Red Wolves are the only teams in the conference that haven’t already been cannibalized by another squad. The victor will have the league’s top spot to itself before November even gets here; the loser will drop down with Troy, South Alabama, and Louisiana-Monroe in the one-loss column. Arkansas State is the two-time defending conference champion; Louisiana was a runner-up in last year’s race. ASU has a two-game winning streak in the series.

• What information do I, the discerning consumer, require in order to consume this game? The Thundering Herd and Blue Raiders kick off on Thursday night at 7:30 p.m. ET in Murfreesboro. The game will be televised on FoxSports 1.

• What or whom should I watch? An MTSU defense that has recorded 20 turnovers this season versus Rakeem Cato’s aerial antics, and an all-around stout Marshall defense versus an MTSU offense that’s not good at anything, really. Also, this is your reminder that Marshall’s head coach is named Doc Holliday and hails from Hurricane, West Virginia.

• What’s at stake here? The Blue Raiders already have two conference losses; Marshall is the only remaining team in C-USA East with a perfect conference record. About the best MTSU can hope for here is to play spoiler to the Herd’s divisional run and sell lots of blackout jerseys.

• What information do I, the discerning consumer, require in order to consume this game? The Wildcats and Bulldogs kick off on Thursday night at 7:30 p.m. ET in Starkville. The game will be televised on ESPN.

• What or whom should I watch? Besides “Signing Day 2014 to see what kind of class Mark Stoops delivers following his first full recruiting season”? Let’s go with another 100-yard rushing performance from sophomore Bulldogs quarterback Dak Prescott. Does he feel like he could take on the whole Empire himself? Right name, wrong Mississippi football program.

• What information do I, the discerning consumer, require in order to consume this game? The Broncos and Cougars kick off on Friday night at 8 p.m. ET in Provo. The game will be televised on ESPN.

• What or whom should I watch? Running quarterbacks duel! Boise State quarterback Grant Hedrick, who performed well in his first outing after being thrust into action following Joe Southwick’s ankle injury on the first series last week against Nevada, versus BYU’s Taysom Hill, known around these parts as The Kid Who Put 259 Rushing Yards on Texas by Himself:

• What’s at stake here? As an independent with two losses, BYU is out of BCS contention, but one more win will at least make the Cougars bowl eligible. As a Mountain West team with any losses whatsoever, Boise State is also out of the running for the big-time postseason contests, but it is still in the race for the MWC’s Mountain Division title, an appearance in the first-ever Mountain West championship game, and a fourth consecutive Las Vegas Bowl bid, which will not involve BYU, but which might just involve Chris Petersen finally coaching a game in one of those feathered headdresses, for variety. Someday.