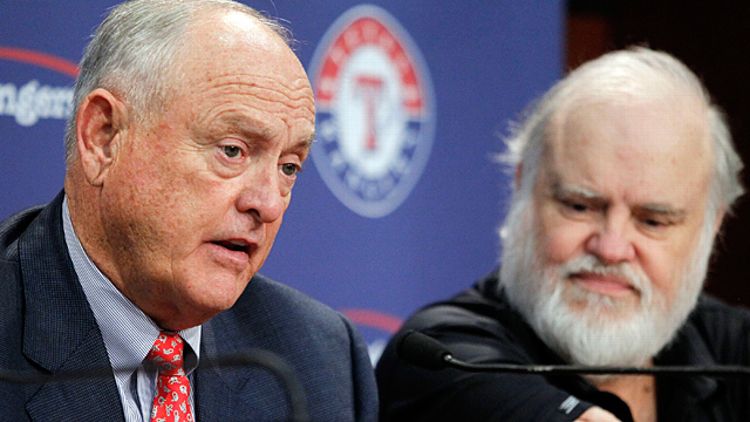 In 1990, Nolan Ryan bought a bank in Alvin, Texas. It was an era of financial chicanery, of Michael Milken and Ivan Boesky. Ryan entered the industry as a folksy CEO. “When I was growing up,” he remarked, “customers knew their banker by name. That’s the way it should be.” Nearly two decades later, Ryan ran the Texas Rangers almost exactly as he had the Express Bank. You knew where he sat during games. You knew the plain and sensible thoughts that crossed his mind. And until his jarring resignation Thursday, everyone in baseball knew the Rangers team president by name.

Ryan says he “resigned”; the Rangers owners say “retired.” The distinction isn’t important. The Rangers came to the conclusion that GM Jon Daniels was doing the hard work of organization-building and Ryan was a useless figurehead. I want to alter that line of thinking only slightly. In six seasons with the Rangers, Nolan Ryan was an extremely useful figurehead. His mere presence offered the possibility of optimism, which is the second-best thing to signing Yu Darvish and Adrian Beltre.

These days, the Rangers are described as a “model franchise.” So let me take you back to the two times Ryan landed his spaceship in Arlington. The first was 1989. Ryan was 42 years old and still a baseball player. The Rangers had never won a playoff game, let alone appeared in a playoff series. That offseason, they traded for Julio Franco and Rafael Palmeiro and gave $1.8 million to Ryan.

“Probably the most important byproduct of all that change is a change in their image and self-image,” Sandy Alderson told The Sporting News.

Alderson was right. Ryan had chosen the Rangers over the Angels, who’d offered more money, which was arguably the biggest thing that had happened since the team moved to Arlington in 1972. The Rangers gave Ryan a sinecure to do whatever he wanted. In a memoir published three years later, while he was still a Ranger, Ryan dinged Franco for his defense. (“He makes an awful lot of errors.”) Ryan also wrote, “We’ve become too image conscious, too worried about what the rest of the world thinks of us. That’s why we didn’t finish off Iraq.” Imagine if Ruben Sierra had ventured the opposite opinion.

Ryan was still a good pitcher — he had a WAR of 5.1 in ’89. But his PR value was infinitely greater. As a Ranger, he recorded his 5,000th strikeout and his 300th win and his sixth and seventh no-hitters. I remember opening the fat special sections of the Dallas Morning News and Fort Worth Star-Telegram. I remember sneaking down to the seats behind home plate at the old Arlington Stadium just to hear the sound of a Ryan pitch hitting the catcher’s glove, and I can still remember the thwack. Ryan gave us Rangers fans the feeling that ours was a real baseball club, doing real, meaningful things, even if the streak of not winning a playoff series would remain intact for 21 more years.

In 2008, Ryan returned to Arlington as team president. The Rangers were arguably more desperate for a lifeline. The team had spent the last several seasons tricking fans into thinking it was a big-market franchise, and had just recently and luckily gotten out of paying the Yankees for taking A-Rod off its hands. As columnist Randy Galloway wrote, “You must have lost your damn mind, putting your name, your legacy, and your credibility on our miserable mess of a baseball franchise.”

It was never clear what exactly Ryan was supposed to do. Daniels was already the Rangers GM, and Ryan was theoretically his boss. The Rangers owner, Tom Hicks, explained their relationship this way: “Since the general manager will be held accountable for all his moves, Nolan wants Jon to have the final recommendation on those moves.”

Mainly, Nolan Ryan was supposed to just be. It was often said the Rangers hoped in some metaphysical way that his awesomeness would “rub off” on the franchise. I met Ryan a couple years ago at spring training. He was standing on a backfield, watching what was left of Brandon Webb’s shoulder throw off the mound. Ryan spoke in his hypnotic twang, an affect he once called “casual country gentleman.” (I’ve heard a lot of Texas accents, but never one delivered as stubbornly slowly as Nolan’s.) We talked about two of his brainstorms. Ryan had decided that Rangers pitchers should embrace the state’s awful summer heat and learn to use it to their advantage. That seemed both old-school and appealing. Second, Nolan told me he’d wanted to ban BlackBerries from the Rangers organization. That seemed … really nuts. Ryan sheepishly pulled a BlackBerry of out of his jeans pocket to show he’d been defeated. At the end of the interview, he gave me a ride back to the clubhouse on his golf cart and warbled, “I’ll see you down the road.”

I was one of many writers whom Ryan transfixed. His being Mr. Outside, while Daniels labored in his secret bunker, gave rise to the myth that Ryan was actually doing all the work. A New York Times Magazine profile said that Ryan had “purchased” the Rangers in 2009. Well, two very rich Texans, one of whom is a billionaire, bought the Rangers. Ryan was the front man. That Ryan helped rescue the team from bankruptcy (his group outmaneuvered fellow bidder Mark Cuban) was exciting and extremely important. But, again, it was less about doing and more about being.

As team president, Ryan was a fixture in the first-base owner’s box. What was he doing there, outside of entertaining his pal George W. Bush (a.k.a., the guy who finished off Iraq)? I dunno. But having Nolan the Team President watch your franchise offered the same strange confidence as having Nolan the Banker watch your savings account. I’m only sad that Nolan Face never attained the immortality of Manning Face. Perhaps that’s because there was only one Nolan Face: the look of a man who has seen his prized calf murdered before his eyes.

Ryan’s state of being had real uses too. He provided a human shield for Daniels when the GM got off to a very rocky start, blowing trades that gave away Adrian Gonzalez, Alfonso Soriano, and John Danks. (By the time Ryan arrived, Daniels had already won the Mark Teixeira trade, though the team was still sub-.500.) Ryan’s chattiness with reporters — his role as the fleshy “face of the franchise” — saved Daniels from the work of PR, which was never his forte. And inside the clubhouse, Ryan could play good cop to Daniels’s bad cop. Before the 2011 season, Daniels wanted to get rid of Michael Young, but Young’s salary was so high that he couldn’t make a good deal. Young was pissed. So Ryan, who could honestly claim the trade wasn’t his idea, offered an olive branch. “I wanted to reach out and say, ‘Let’s talk about what’s going on,’” Ryan told me. “‘What you’re feeling. What your thoughts are.’ If our relationship isn’t right, it’s going to affect how we play and who we are.” Young was touched and had a very useful season.

I suspect there were a number of moments like that in Arlington, when two tectonic plates were moving past one another and Ryan threw himself into the divergent boundary. The problem was, Ryan insisted on making baseball decisions. In 2011, he hired Tim Purpura, an ex–Astros GM, as farm director. He insisted the team sign Roy Oswalt. I didn’t believe in the idea of “locker room cancers” until I saw Oswalt Face in the Rangers clubhouse one day at Yankee Stadium. It was more brutal than Nolan Face — like someone had seen two prized calves murdered before his eyes.

Neither of those were franchise-destroying moves. (Ryan’s initial skittishness about signing Yu Darvish might have been. Darvish won him over during a steak dinner.) But Ryan was getting in the way. The Rangers owners sided with Daniels. When Ryan got stripped of the team presidency this spring, it was only a matter of time before he quit.

Is it possible that mere benevolence is an asset for a baseball club? Maybe you have to be a Rangers fan to answer yes. Daniels is a badass who deserves all the praise he gets. But Ryan was a guy who chose the Rangers when nobody else would. He lent us some of his gravitas when we had none. And as Ryan once wrote, “It’s a real love affair between a guy who’d rather pitch before the home folks than anywhere else in the world.” The importance of being Nolan is the ability to transmit beautiful, irrational belief. If any fellow Rangers fans are interested, Ryan has invested in a new bank.