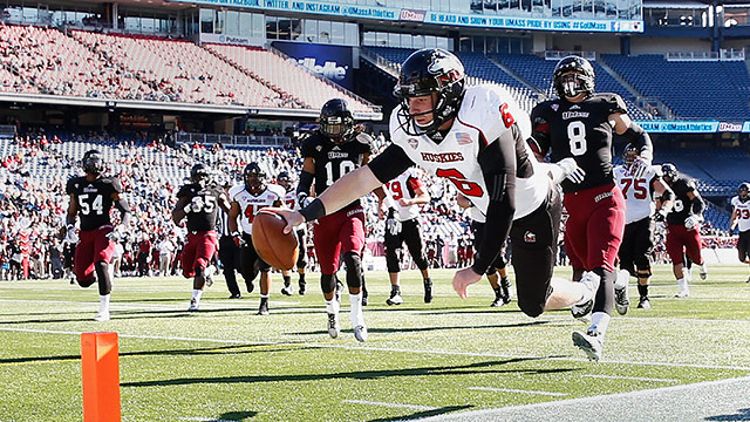 College football? On MY Tuesday night? It’s more common than you think. We’re sure you have many questions. We’re here to help.

• What information do I, the discerning consumer, require in order to consume this game? The Bulls and Rockets take the baton from Monday Night Football to extend the glorious unbroken November streak of consecutive days with nationally televised football. Kickoff is scheduled for Tuesday night at 7:30 p.m. ET in Toledo’s Glass Bowl; the game will be televised on ESPNU and streamed on WatchESPN. So in order to maintain a steady consumption of football, we would’ve had to watch Dolphins-Bucs? Gross. Sacrifices must be made. Last Friday, we watched several minutes of Louisville-UConn. For lack of less disgusting imagery, America is basically hoarding football in its cheeks at this point in anticipation of a long, dumb, football-free offseason.

• For what or whom should I be watching? Home games at Toledo, particularly night games, are reliably good fun with a crowd that’s regularly underrated in terms of spite output. The matchup to follow: The Bulls’ mean-spirited defenders, particularly linebacker Khalil Mack, versus a Rockets offense that’s averaging more than 33 points per game but may be missing its most potent offensive threat. David Fluellen, who has been beset by injuries for a couple years now and seems to put on effortless triple-digit rushing performances whenever he does see the field, is a game-time decision. Meanwhile, Mack needs one forced fumble to tie the NCAA career record, and two to break it.

• What information do I, the discerning consumer, require in order to consume this game? The Bobcats and Falcons kick off at 7:30 p.m. ET on Tuesday in Bowling Green’s Doyt Perry Stadium. The game will be streamed on ESPN3.

• For what or whom should I be watching? Malaise, and how quickly it evaporates. Ohio got thrashed by Buffalo in Tuesday-night MACtion last week, while BG is coming off of a thorough dismantling of Miami (Ohio).

• What’s at stake here? MAC East standing. Buffalo, Bowling Green, and Ohio rank 1-2-3 in the division heading into Week 12; the next closest teams all have at least four conference losses. If the Falcons want their game against the Bulls in a couple of weeks to carry conference championship game stakes, they’ll need to come in with a 6-1 record in league play.

Ball State at no. 15 Northern Illinois

• What information do I, the discerning consumer, require in order to consume this game? The Cardinals and Huskies kick off at 8 p.m. ET on Wednesday at Huskie Stadium in DeKalb. The game will be televised on ESPN2 and streamed on WatchESPN.

• For what or whom should I be watching? A potential pointsplosion, the kind that made us love MACtion in the first place. These squads are averaging a combined total of more than 84 points per game. Tell us how wrong you were about Keith Wenning last week. We were wrong to suggest that Ball State’s quarterback would resume the season-long streak of 300-plus-yard games that had ended the week before. Against Central Michigan, Wenning threw for a mere 299 yards and four touchdowns. Our sincere apologies.

You already know Wenning’s counterpart, Jordan Lynch. The fleet-footed, Shania Twain–rocking NIU quarterback has thrown 19 touchdown passes to five interceptions, and has rushed for 12 more scores, including four in the Huskies’ last game versus UMass. Not too far behind Lynch lurks the excellently named Cameron Stingily, who has recorded 141 carries for 784 yards and eight touchdowns this season.

• What’s at stake here? Real live BCS implications! Undefeated, currently ranked 15th in the BCS standings, and ahead of a projected AQ conference champ (the AAC’s Central Florida), the Huskies would receive a BCS bid if the season ended today — if it weren’t for Fresno State being undefeated and ranked 14th. How does that work again? Bookmark this; we get the feeling we’ll be coming back to it a lot this month. Pertinent excerpt:

As ever for the non-AQs: Win, win big, and wait for some luck. On a conference level, this is both teams’ trickiest regular-season hurdle; the winner will likely get Buffalo in a compelling MAC championship game.

• What information do I, the discerning consumer, require in order to consume this game? The RedHawks and Golden Flashes kick off Wednesday at 8 p.m. ET in Kent’s Dix Stadium. The game will be televised on ESPNU and streamed on WatchESPN.

• For what or whom should I be watching? You shouldn’t. Not really. Especially not when Ball State and NIU are playing at the same time. Kent State’s Dri Archer is a delight to watch when he’s healthy, but stay on ESPN2, with maybe a brief detour to YouTube to remember the good times:

• What’s at stake here? For Miami, the team’s first win of 2013. For Kent State, the chance to stay out of last place in the division.

Georgia Tech at no. 8 Clemson

• What information do I, the discerning consumer, require in order to consume this game? The Tigers and Yellow Jackets kick off at 7:30 p.m. Thursday in Death Valley. The game will be televised on ESPN and streamed on WatchESPN. More like out-of-breath valley, amirite? We can’t believe we’re saying this, but be nice to Clemson, y’all. The Tigers fell off the radar about as rapidly as humanly possible after being devastated at home by Florida State, and have maintained the lowest imaginable profile for a top-10 team since, beating Maryland soundly and Virginia severely on the road in the intervening weeks. Florida State might be the best team in the country right now; that loss doesn’t make Clemson bad. It’s still not called feelingsball, right? Still not called feelingsball.

• For what or whom should I be watching? An air show from Clemson’s Tajh Boyd and Sammy Watkins in the penultimate home game of their joint college careers, and a multi-pronged turf-chewing party from Tech’s hydra-headed run game.

• What’s at stake here? This is the last conference game for both teams; the Jackets and Tigers have virtual byes against FCS teams in Week 13 before their season-ending rivalry games against SEC opponents. Clemson can’t catch Florida State in the Atlantic even if the Seminoles lose to Syracuse in their conference finale (snooorrrt). Tech is one of four Coastal Division teams clustered at the top of the standings with two losses, but has already lost to two of the other three teams (Miami and Virginia Tech). Do you kinda want to see the team Tech did beat, Duke, win out and take the division, just for funarchy? We really, really do.

• What information do I, the discerning consumer, require in order to consume this game? The Thundering Herd and Golden Hurricane kick off Thursday at 7:30 p.m. ET in Tulsa’s Chapman Stadium. The game will be televised on Fox Sports 1. That’s an awfully poetic mascot matchup. It is! Sadly, we fear the on-field action won’t measure up.

• For what or whom should I be watching? Some sign of animation from Tulsa, but you might be waiting a while. The Golden Hurricane have followed up last year’s 11-3 season with a 2-7 campaign in 2013, including a three-game skid against their most recent conference opponents, Tulane, UTSA, and East Carolina. In their last three games, the Thundering Herd have scored 166 points. This one will get ghastly in a hurry.

• What’s at stake here? Marshall currently sits at 4-1 in the C-USA East, and is on a collision course with East Carolina, which sits at 5-1. The balance of the Herd’s and Pirates’ schedules should make it pretty easy for them to arrive at their season-ending game in Huntington with identical 6-1 conference records.

Washington at no. 13 UCLA

• What information do I, the discerning consumer, require in order to consume this game? The Huskies and Bruins kick off at 9 p.m. ET Friday in the Rose Bowl. The game will be televised on ESPN2 and streamed on WatchESPN.

• For what or whom should I be watching? Another big game out of Washington’s Bishop Sankey versus an underwhelming rushing defense seems likely, but all eyes will be on UCLA’s newly unveiled, all-purpose football life form Myles Jack, who earned Pac-12 offensive player of the week honors following his debut at running back in Week 11. Will he run against a poorly regarded Huskies ground defense? Will he continue to rack up accolades at linebacker? Will he start at quarterback, just for variety, and throw a touchdown pass to Brett Hundley, because he can? Stay tuned.

• What’s at stake here? With losses to both top teams in the Pac-12 North, Washington is well out of its division race, but for the Bruins in the South, the last few weeks of the regular season could get rrrreal interesting. UCLA’s conference record is 4-2, tied with USC and one loss behind Arizona State — which happen to be the teams UCLA has to face in Weeks 13 and 14. A three-peat Bruins appearance in the conference championship game is still in play.