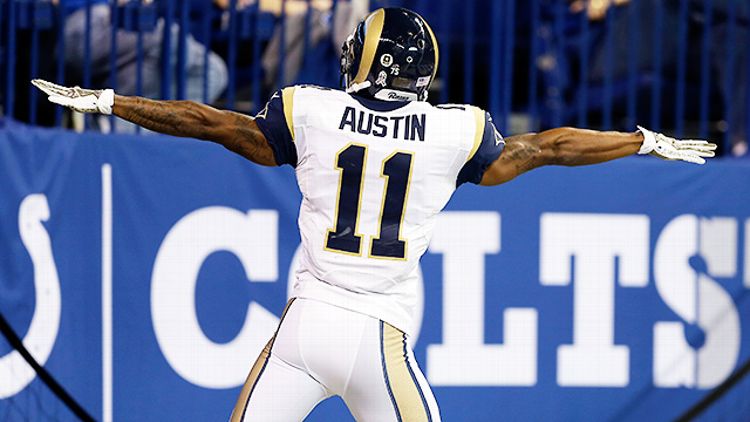 Week 10 produced several WTF? fantasy moments, but the St. Louis Rams took the cake. More accurately, the Rams broke into the bakery, graffitied “LES SNEAD’S HAIR 4 LIFE” on the wall, held an impromptu dance party, and then took the cake, all before law enforcement could arrive.

It was basically three hours of this, unabated by chaperones or tackling:

That’s Tavon Austin paying homage to Cousin Terio, a short, pudgy 6-year-old who’s become a Vine sensation. Like most kids, Cousin Terio is not quite big enough to play in the NFL, but his low-to-the-ground rushing style would probably allow him to wreak havoc on the Rams’ struggling run defense. At the very least, he’d be able to outgain the Colts’ entire backfield.

So, yeah, I’m deeply sorry for recommending Trent Richardson’s services, because no one deserves to suffer like that, especially not you. Still, Indy’s feeble rushing attack was merely the 382nd-most surprising development of Rams-Colts. This game was totally bonkers, and requires a semi-comprehensive breakdown, so here are some of the highlights from reasons no. 1-381, with only a few omissions.

• Andrew Luck played a really, really shitty game. I’m not just saying this because Luck cost two of my teams wins. His outing was empirically shitty; it was his second-worst fantasy performance of the season, rife with turnovers (three interceptions, one fumble returned for a touchdown), and mercifully ended by an appearance from Matt Hasselbeck, who added a fourth pick for good measure. Christian Ponder scored just as many points (13) as Luck this week, and Ponder didn’t even play three full quarters. Occasional clunkers are expected for young quarterbacks — just not at home against the Rams. But rest assured, Luck owners: This was NOT a crap effort.

• Kellen Clemens didn’t play a really, really shitty game! Craving efficiency? Move to St. Louis, where you can breathe the same air as yards-per-attempt god Clemens, who needed a mere nine completions to pass for 247 yards. And no, I don’t care that Austin’s YAC accounted for much of that, because this is something to celebrate. You will always remember where you were when Kellen Clemens outscored Tony Romo and Cam Newton.

• Zac Stacy and his backup have officially made Isaiah Pead irrelevant. As expected, Stacy received another heavy workload on Sunday. He was pretty pedestrian this time around, but managed to satisfy owners with a second-quarter score. Benny Cunningham, who may or may not be fourth in line for the British throne, saw seven carries of his own and peeled off a 56-yard run, giving him more total yards than Stacy. I guess my point is this: Why the hell is Pead still owned in 67.4 percent of ESPN.com leagues, let alone started in 6.1 percent of them? Is Pead THAT avid of a fantasy player himself?

• Houston’s and Seattle’s top-ranked defenses didn’t stop the Colts, but the Rams did. In retrospect, we should’ve seen the St. Louis D/ST’s 25-point extravaganza coming. With the Chiefs’ stellar unit on bye, the Rams were bound to pick up the slack for their Missouri brethren. So Midwestern of them.

• Austinsanity. I’m going to let you in on a little secret: When I was writing the “Cut Him or Keep Him?” portion of Thursday’s column, I didn’t include Austin because I thought there was no legitimate argument to support keeping him. Moreover, ESPN.com owners largely agreed with me. After starting the season with near–100 percent ownership, Austin has been one of the most commonly dropped players in recent weeks, which makes sense since Austin has averaged fewer than three targets per game over the last month. And while Austin’s 31-point performance against the Colts was certainly exciting, it’s hard to feel too confident about Austin’s immediate future. I mean, two receiving touchdowns on three targets is an aberration of Eddie Royal proportions, and that punt should never have been returned in the first place. So, appreciate the splendor of Austin’s day, but also recognize that the performance was not sustainable. If a leaguemate is willing to give you real value for Austin, take that offer in a cocaine heartbeat.

• More Like Tolziensanity, Amirite? At around 2 p.m. on Sunday, every iPhone user with a fantasy team rushed to ask Siri the same exact question.

Because Siri was no help, I did a little digging of my own and discovered that a “Scott Tolzien” is not something you can eat, put on a Christmas list, or purchase at a flea market. Scott Tolzien is a real live human being, one who makes a modest living as the Green Bay Packers’ third-string quarterback. When Seneca Wallace went down with an unpleasant-sounding groin injury, Tolzien was pressed into duty and exceeded expectations. Granted, Tolzien’s expectations were “hand off to Eddie Lacy and don’t throw 11 interceptions.” But still!

Tolzien made a fantasy stud of the once-maligned Jarrett Boykin and didn’t obliterate Jordy Nelson’s or James Jones’s value, either. Tolzien will start in Week 11 versus the Giants, though the job may go to new addition Matt Flynn after that. With Wallace seemingly on the outs, it’s time to (slightly) recalibrate our expectations for the Packers offense. Namely, hold off on cutting Boykin, consider adding Tolzien/Flynn if you need a bye-week fill-in, and beware of tight end Brandon Bostick — this has been a terrible year for alliterative names.

• I May Not Have Graced the Madden Cover, But I Promise I’m the Giants’ Best Back: In some respects, it’s astonishing that Andre Brown saw 30 carries on Sunday. It was Brown’s first week off the short-term injured reserve list, Peyton Hillis actually started the game, and Tom Coughlin even hinted that Brown would be eased back into action. In other respects, Brown’s massive workload isn’t astonishing at all, because Tracy Porter is to the Manning family what Bernard Pollard is to the Patriots, Hillis excels at doing Hillis things, and I’m pretty sure the Giants’ only other healthy running back is a past-his-prime Smash Williams.

Tom Coughlin on giving Andre Brown 30 carries: "I told you 40 carries the other day. I certainly didn't mean to mislead you." #NYG

Two weeks ago, we hypothesized that kicker Josh Brown was the Giants’ most efficient offensive weapon, which was true at the time. However, a healthy Brown instantly antiquates that line of thinking. Despite their horrendous start, the G-Men hilariously remain in the NFC East race, so expect to see a heavy dose of Brown in the coming weeks. His ownership numbers are a little too high for him to make our Waiver Wire Priority List, but there’s a slight chance he’s available in your league. If so, spend the rest of your day doing the Cousin Terio, because life won’t get any better at this point in the fantasy season.

• Live in the Now and Forget About the Last Two-Plus Seasons: Mark Ingram’s celebratory delay-of-game penalty was worth every yard it cost the Saints. Sean Payton might not agree, but consider the stakes: Ingram, a former first-round draft pick, spent his first two professional seasons disappointing fans and fantasy owners alike. His 2013 began on a similarly inauspicious note, with 1.8 yards per carry through two games and a toe injury that kept him out of action until Week 9. He was officially in jeopardy of becoming a major draft bust (he still is, frankly), so we can forgive him for spiking the ball after what must have felt like the first positive development of his NFL life.

Maybe Ingram’s agent called him before the game and said, “Hey, Mark, you kind of need to start gaining yards if you want to continue playing football for a living,” because Ingram looked like a man possessed the entire night. Against my better judgment, I’m buying Ingram’s stock as we head into the regular season’s homestretch. He’s an insanely gifted player, he’ll get consistent opportunities if he plays well (which isn’t the case for everyone), and opposing defenses can’t stack the box versus Drew Brees. Slide Ingram in at flex until he gives you a reason not to.

• Invest in Arian Foster’s IPO Before You Start a Falcon: The Falcons have undoubtedly provided the lowest return on fantasy investment of any team in the NFL. Nothing encapsulates this better than Steven Jackson’s game log.

You’d think the Falcons would unleash Jackson, considering the impaired state of their receiving corps. You’d also think a healthy Jackson could gain a few yards per carry, kind of like he did in St. Louis for nine seasons. Finally, you’d think the Falcons would just air it out when Jackson struggled. But you’d think wrong! Don’t bother adding Harry Douglas or Drew Davis, because Mike Smith is committed to ruining your fantasy season.

I don’t blame the Braves for moving. I’d want to escape the stench emanating from the Georgia Dome too. It’s that bad.

Remember how I said Luck cost me two fantasy games this week? Well he did, because he was my only starter who scored below his projected point total. But in one of those games, it was really James Ihedigbo’s stupid tip that did me in, because I was facing A.J. Green and lost by two freaking points. Green’s Hail Mary catch was worth 12.1 points all by itself in my league (six for the touchdown, 5.1 for the yards, one for the reception), putting it in the running for the Most Valuable Play award, a highly prestigious honor that will be featured in our season-in-review post. My deepest condolences go out to any folks who faced Green and lost by a slim margin. I feel your pain.

1. RB Donald Brown, Indianapolis Colts (available in 93.4 percent of ESPN.com leagues): I spent much of the intro shitting on Indy’s rushing attack, so this may seem a tad contradictory. But I’m recommending Brown as a running back in name only; it’s his receiving prowess that makes him worth owning. The surest sign of a receiving corps in disrepair is when Griff Whalen sees meaningful playing time, so it’s no wonder Brown caught five balls for 64 yards and a touchdown on Sunday. Expect this trend to continue, especially with Whalen hurting.

2. RB Brian Leonard, Tampa Bay Buccaneers (99.7 percent): Leonard played at Rutgers, which means he’s a Schiano Man, which gives him the edge over Bobby Rainey in the aftermath of Mike James’s fractured ankle. Nevertheless, Leonard is starting material only if you’re über-über-über-desperate.

Categorically not encouraging: This week’s waiver wire pickings. I have a claim in for Dennis Johnson, but I sincerely hope things aren’t that grim for you.

Gavin Byrnes is a legend, because he started Griff Whalen in four leagues this week and tasted victory in three of them. I’ve never seen such dedication to a noble cause; my faith in humanity is officially restored.

You can marvel at Gavin’s other Griff-aided victories here and here. Let the record show that Gryffindor scored a not-insignificant three PPR points, which made him a better play than Anquan Boldin, Larry Fitzgerald, and Wes Welker. Nonetheless, he remains available in 100 percent of leagues. More Griff Whalen for us, I suppose.