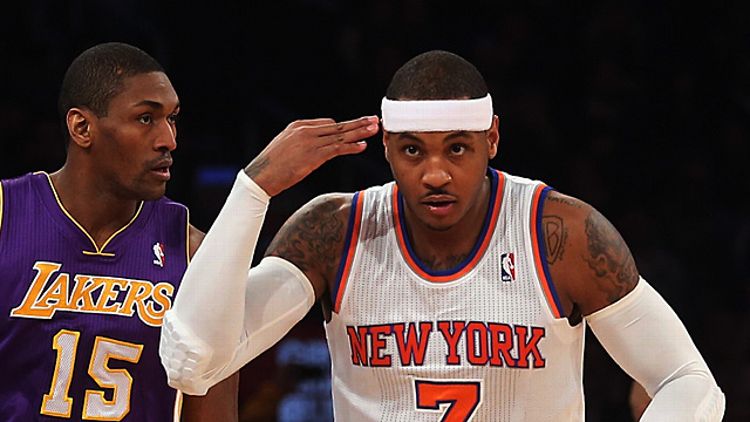 Bernie Williams is not a great guitarist. In fact, listening to him last night as he studiously inched through as spangle-free and un-Hendrix a rendition of the national anthem as I could possibly fathom, I wondered if he didn’t secretly hate America. But none of that really matters, not as long as he remains a beloved hero in New York and New York needs talented children and celebrity hobbyists to perform the national anthem. And, you know, it’s great that Bernie has some other passion to fall back on, something to fill the void now that he no longer patrols center field for the Yankees. He is 44. That’s ancient for an athlete but some 20, 30, 40 years younger than most American retirees.

Watching the Knicks this year, you think about these things — aging, mortality, the virtue of experience, what it means to hang on too long. They are an old team. I sometimes forget what year it is when I’m watching on TV and the camera pans by Kurt Thomas, Marcus Camby, and Rasheed Wallace on the bench. Jason Kidd looks like a recently unmasked ancient supervillain. Even young Iman Shumpert appears to have just stepped off the Juice Crew charter jet as he swaggers about during the pregame introductions. But this strange configuration of pieces has made the Knicks a shockingly fun team to follow, not quite at #LINSANITY levels but with a similar feeling that this pace probably isn’t sustainable. You hope it lasts but the basic physics of knees and backs suggests things will slow down at some point in the next couple months. Going into this season, it was hard not to feel like Carmelo Anthony’s time was running out and that the Knicks hadn’t done much to capitalize on the tread that remains. But whether it’s the influence or proximity of the Knicks’ ’90s crew, or just a slight turn in his own worldview, Melo is consistently playing with a determination and poise that used to surface only sporadically. There were a few times last night when he drove to the basket, did something gasp-worthy, and then ran back on D, ignoring Spike Lee’s outstretched palm along the way. He would sink a 3 and then fight the temptation to preen. He finished the first quarter with 22 points, and it felt both thrilling and businesslike.

Even more so because of the opponent: the Lakers, a team many had penciled in for the Western Conference Finals before the preseason. Mike D’Antoni caught some lusty boos during the pregame introductions. As Kobe sauntered out, I turned to my friend Kris and observed that this might be one of the last times we ever get to see Kobe Bryant play in the Garden, if he indeed retires in the next two years.

And what a time to see him. The Lakers look terrible right now — an unclear mandate on offense, porous on defense. Part of this is because Pau Gasol and Steve Nash are out, but there were long stretches of last night when Dwight Howard felt like a non-factor as Kobe, “Ron Artest” (as he is still known in parts of New York), and some combination of Chris Duhon, Jodie Meeks, and Devin Eb … you get the point.

When you’re Carmelo Anthony, and when things are going well, you take a break from shooting drills and build with Swizz Beatz as he skulks the sidelines holding his baby. On the other side of the court, Kobe shuffled around with an iceberg bandaged to his torso, watching Robert Sacre repeatedly miss elbow jumpers. You can hate Kobe with good reason, and he’s clearly past the point of caring what anyone thinks about him. But it wasn’t supposed to happen this way for him. Near the end of the third quarter, Kobe hit the floor for a loose ball. He stayed there for a brief moment, grimacing and then bringing his knees up to his chest for a split second in order to stretch out his back. Then he got up, darted to where the action was, and nearly came up with a steal.

Back to this question of hanging on too long and knowing when your time is up. The NBA will always have a place for you if you’re a safe, smart ball handler, a tough guy who can foul and rip down some boards, or a middle-aged turtle who remains money from downtown. You might sully your own minor legacy by bouncing around the league through your mid-30s, but what does that mean when we’re talking about the game you’ve grown up playing and loving, the one constant thing around which your life has been organized since you were a tween? Rasheed is no longer the Rasheed of my memories — who cares as long as the team is playing well and he’s having a good time (#TAKETHATTOTHEHEAD)?

The game fizzled to a conclusion and guys hung around to pray and chat. Dwight Howard walked over to say hi to Patrick Ewing, who had been sitting courtside. Kobe was nowhere to be found. It’s possible that the Lakers and “Mike Antoni” (ha-ha, no D!) start to get it and we all look back and laugh at all this circa-November/December naysaying. But watching Kidd dribble out the clock in the final minute and stanch a Laker comeback, I kept wondering what Kobe’s next few years would look like and, beyond that, how one of the most brilliant and polarizing — and certainly the darkest — basketball players of my lifetime would spend the remaining decades of his life. I’m not sure why I care, beyond the feeling that this inability to project Kobe’s future makes me wonder if I’ve ever understood him to begin with. It’s strange to see someone roughly the same age as you and realize that they will soon have to find an entirely different way to spend their days. You can’t see Kobe hanging around too long, a mercenary in search of more rings or a fun-loving guy who’s always wanted to live in New York or Miami, and he doesn’t quite have the demeanor to slide into some kind of coaching or front-office position. These futures would suggest giving up the fiat power that is his drive. Whatever happens, he’ll soon be 36 or 37 and have the rest of his life in front of him to figure these things out. I suppose he can always become a guitar god in China.

The Trenchie Awards: Aldon Smith's Decimation of the Miami Dolphins (A Story in 2 GIFs)