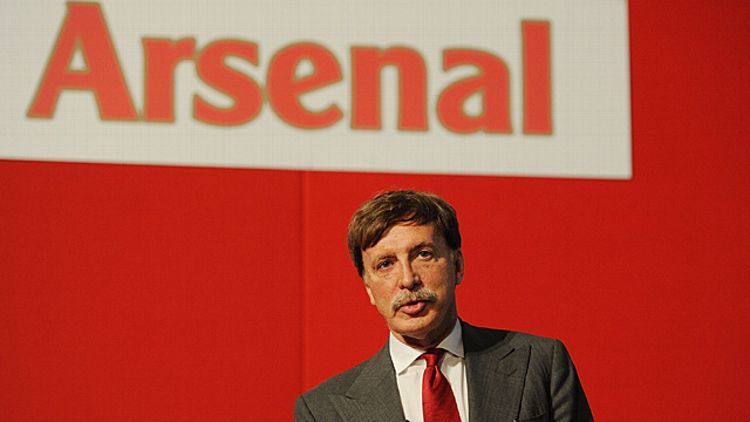 On Tuesday, Arsenal lost on penalties to Bradford in the League Cup. This is astonishing because Bradford is in the fourth division of English football and Premier League–side Arsenal is still good (or they might be … they are in the last 16 of the Champions League, after all). And it’s not every day that you get to follow a team to (what you think is) its nadir.

If you’re Jonesing for some schadenfreude, you could OD on it by reading the post-match comments over at Arseblog, maybe the top Gooner-centric destination on the Web. The big takeaway is that the “Wenger out” groundswell now seems to be about the size of the Sudetenland. Some of the club’s current struggles — just 10 wins in its last 25 matches, peppered with some other dreadful losses (Norwich, Swansea) in between — are indeed manager Arsene Wenger’s fault. He did bring in Gervinho, who seems to be in some secret competition with the on-loan Nicklas Bendtner to see who can miss the most unmissable sitter (Gervy locked up the contest against Bradford). And the extent to which financial issues may have forced his hand in selling any or all of Emmanuel Adebayor, Samir Nasri, Gaël Clichy, Alex Song, and Robin Van Persie, while relevant, is an entirely different discussion. The fact is he has sold really good players and replaced them with less good players.

No, fault aside, Wenger isn’t the problem. Or more accurately, sacking Wenger — and really, Arsenal fans, whom do you think you can bring in if you shitcan Wenger? — won’t solve the problem. That’s because the problem is bigger than the manager; and if anything Wenger is still the last best hope for staving off the looming disaster of the real problem: Stan Kroenke.

Since April 2011 Kroenke has been the majority shareholder of Arsenal Football Club. So for all intents and purposes, the club is his. Kroenke (or “Silent Stan” as he is known because, well, that doesn’t really need explanation) might be a familiar name. He married into Walmart money and also owns several North American sports franchises (Colorado Avalanche, Denver Nuggets, Colorado Rapids, St. Louis Rams). Their common characteristic is that none of them is particularly good.

And for a club whose de facto mascot is now a monster named “Hasn’t Won a Trophy in X Years” (in which X is currently seven), the last thing Arsenal need is its newish owner to have a trophy cabinet almost as barren as the one at the Emirates (the stadium, not the country).

Kroenke does have a Stanley Cup from the Avs. But it’s not exactly something he can take much credit for, as he bought the team (along with the Nuggets and the arena in which both teams play) in July 2000, some scant three months before the Avs’ Cup-winning campaign began. That means all the major player pieces (Sakic, Forsberg, Borque, Roy, Hejduk, Drury) were already in place. The slide into mediocrity began immediately thereafter, slowly at first. The Avs won fewer games in each of the next three seasons, but still managed an average conference finish of third place before the strike-abandoned season of 2004-05. After that, the drop was precipitous, as the Avs have since averaged a non-threatening 10th-place finish in the final conference standings, having made the playoffs in only three of those seven seasons and never past the second round.

The best thing you can say about Kroenke’s ownership of the Nuggets is that he has actually elevated them to unremarkable status. During his first three seasons in charge, the team won at a .341 clip. Since then, they’ve been at .591. That’s not bad. It’s terrible. The Nuggets might be the Platonic form of “just competitive enough to not be of any use.” Since ’03-’04, the Nuggets have been to the playoffs nine straight times. Here are those results:

OK, that omits ’08-’09, when they made it to the Western Conference finals before bowing out to the Lakers, but the list had such a pleasing consistency that it would have been a shame to disrupt it. Still, that’s the stuff of Hobgoblin immortality. The Nuggets are good enough to make the playoffs yet not win, but never so bad they might help themselves through the draft lottery. Detached from the notion of championships, it’s almost an amazing accomplishment.

Most dispiriting for Arsenal’s fans is that Kroenke’s other soccer property, MLS’s Colorado Rapids, might be his worst team. They are just a couple of seasons removed from winning the MLS Cup in 2010, but that trophy is more of a function of America’s need for playoffs. If MLS were treated as a single table (like the rest of the soccer world treats it), the Rapids under Kroenke wouldn’t have better than a seventh-place finish to its name. Even in their championship season they finished the regular season seventh; they were fifth in their division, and if MLS had a format that just took the highest-placing teams from each division, the Rapids wouldn’t have even made the playoffs. Here are the Rapids’ finishes under Silent Stan if MLS were single-table (the number of teams in the league is in parentheses): seventh (12), seventh (12), 10th (13), ninth (15), ninth (15), seventh (16), seventh (18), 14th (19).

As for the St. Louis Rams, the team is only in its third season of Kroenke’s ownership, so it’s hard to say much. It’s also hard to say much good. With a cumulative record of 15-29-1, they are a tie away from having lost twice as many games as they’ve won. If the season ended today, the Rams wouldn’t make the playoffs, just like they haven’t in either of Kroenke’s other two seasons. On the positive side, they’ve got capable people in maybe the two most important positions — head coach and quarterback — but it’s not really translating to wins. At least not yet.

The most obvious inference one can make from all this is that Kroenke just doesn’t give a shit about winning (or only cares that his teams aren’t completely abject). So if you’re an Arsenal supporter, the issue isn’t Wenger. As embarrassing as his outbursts are becoming, they come from a place of caring. Maybe too much. Sure, this season the team looks worse than it has at any point in the last, oh, dozen years, and some of the player decisions — Aaron Ramsey’s consistent appearance in the starting lineup, for one — are increasingly baffling, but this is still the man who has taken this club to the Champions League for 15 consecutive seasons.

That there is a good chance the streak ends this season shouldn’t be half as alarming to Arsenal as the fact that, judging by the performance of his other pro sports teams, the owner doesn’t seem to care much whether they find a way to get back there for another 15 seasons, if at all.