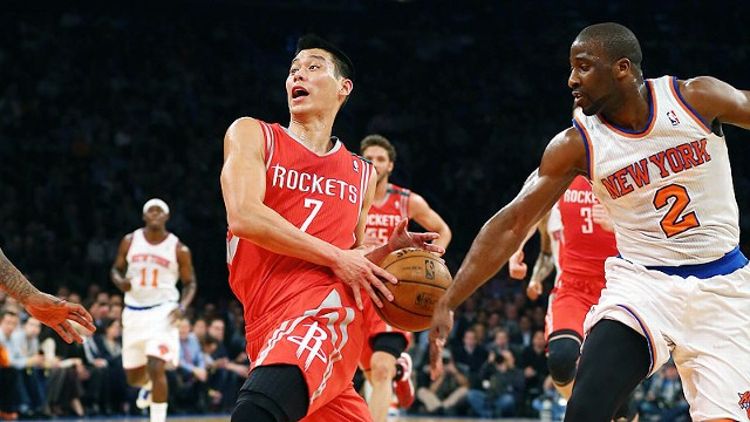 I was standing outside of Madison Square Garden, waiting for my friend, when a middle-aged Asian American man in a fancy suit walked by me and smiled. It wasn’t quite like the throes of Linsanity, when a new constituency of Knicks fans began showing up to the Garden, but last night’s game against the Houston Rockets definitely had a different, faintly festive vibe to it. Someone surged toward the man in the suit and asked him what entrance he should use for his seats, and he didn’t seem to understand when the man in the suit told him he didn’t work at the Garden. The man in the suit looked at me again, not smiling this time. Everyone projects whatever they want onto a man wearing a suit. My friend showed up a few minutes later, we shuffled into the Garden, and cheerfully bought some beer and two bowls of sesame chicken noodles.

Spike Lee had said before last night’s game that he would cheer Jeremy Lin during pregame introductions but boo him once the game started, and that was pretty much what happened. He even has a new pregame ritual with Chandler Parsons. It was strange to see Lin in a Rockets jersey, but then again, it’s not like he’d been a Knick for all that long. There weren’t as many Lin jerseys as I thought there’d be — a lot of Asians in Steve Novak’s thrall, if anyone wants to work that one out — and I admit to feeling a faint anxiety about how he would be received. Maybe this is an instinct born out of one too many evenings in the Fenway bleachers, tasked as the native informant for fellow Sox fans wanting to cheer Daisuke or jeer Ichiro in Japanese. (I’m not Japanese.) But in Linsanity’s dying days and especially now, the precise reasons he’d been so beloved by so many Knicks fans seemed annoying, unnecessary, corny. Once you give the underdog the “ridiculous” contract — once his status as an Asian American becomes a talking point rather than just an overlooked piece of the delightfully messy novelty — then it’s easy to yell at anyone within earshot about the “fake-ass Knick fan” a few seats over cheering the Knicks and Lin at the same time. You could still hear some cheers after Lin’s first basket, but midway through the first quarter, the Garden lustily booed every time he touched the ball, or any time another fan politely cheered a Lin basket. “STOP CHEERING FOR HIM!” a guy behind me kept yelling to nobody in particular, and you could easily picture him having been in that seat last year, cheering and showing up with a headband with Chinese characters on it. It’s not so much that people had forgotten Linsanity, they’d simply moved on and found something to love in this year’s Knicks. But for a lot of us who had been affected by Linsanity in a more personal way, it could never be so simple.

The booing wasn’t hateful, just obnoxious. For it to have been anything more, the Knicks would have to have given us a reason to cheer. Did anyone on the court care about this game more than Lin and maybe the other ex-Knick Toney Douglas? Carmelo Anthony — the only Knick whose reputation suffered during Linsanity — didn’t play, and it’s not like Raymond Felton would be a Knick were it not for Lin decamping to Houston (“I never talked junk about Jeremy,” Felton reminded us after the game). The game was like a highlight reel of Lin’s brief career in New York. He drove to the hoop with a thrilling recklessness, making a bunch of twisty layups but getting caught in midair with nowhere to go a few times, as well. He popped up in the lane a couple of times to strip the ball, and he got abused by one of the roundish Felton’s optical illusion crossovers. He made a few momentum-keying jumpers and air-balled one. All of which is to say that the ball seemed to be in Lin’s hands most of the night, as though James Harden and the rest of the Rockets were deferring to him. However the Rockets eventually resolve this question of who should be commanding the offense, they certainly have some intriguing young talent: Lin, Harden, Omer Asik, budding star Chandler Parsons, Greg Smith.

The return of Lin was a referendum on how the Knicks have done without him and, if we’re to extend the metaphor of seeing your ex, then last night was like running into your ex — during midterms — mussed-up hair, sweatpants, a steady diet of nothing but Frito-Lay products. The Knicks were severely depleted last night, and the question wasn’t so much whether they’re better off without Lin, but whether the moves they made this summer (which includes not matching the Rockets) indicates a culture moving in the right direction. It’s not a team with an eye toward the future. They’ve exceeded expectations all year, but last night was a reminder of just how old they’ve become. As the Rockets built a colossal lead, jeering became the only true sport. A middle-aged woman with blonde hair wearing a Rockets T-shirt with Lin’s name and number on it bore the heap of my section’s jokes, but she was too far away to hear any of it. I was weirdly glad that an older Asian man in a Lin Harvard jersey I’d seen earlier wasn’t sitting anywhere near us. And I didn’t really understand why a random guy randomly sought out an Asian American friend of mine and gave him a high-five. “White people all look the same to me,” he joked.

Chris Copeland — starting in place of Melo — had kept at it like this was Game 7 with the fate of the galaxy hanging in the balance. He finished with 29 points, and we remembered how modestly Linsanity had begun just months ago. As the game oozed to a close, 50 Cent, who had been wearing a gaudy Detroit Lions cap, sitting courtside next to Tracy Morgan, Kate Upton, and some anonymous multimillionaires, got up and walked toward the benches. He was with a friend whose 50 Cent-branded headphones had stayed propped on his head for the entire game. Fiddy walked past the Knicks, Lin, and everyone else to seek out James Harden, and they took a picture on his phone.

It's Time for a Jets Intervention